The Register's Matthew Bain answers your Iowa recruiting questions in his weekly mailbag. 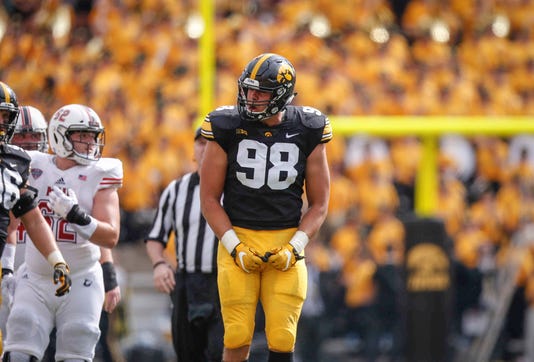 Welcome, once again, to the Hawkeye recruiting mailbag. It's been a minute, hasn't it?

I was back home in California, soaking up Vitamin D before returning to a Midwest winter. Hopefully, all your holiday seasons were awesome and you're recharged and ready for 2019. My folks got me baking equipment because I've been inspired by the greatest creation ever, "The Great British Baking Show." So if I ever vanish from Twitter for a few days, I'll just be in my kitchen covered in flour.

Anyway ... sports. You're here to read about sports. Let's get on with it.

Defensive line (specifically defensive end) seemed like a position of need even before (Anthony) Nelson declared. What is Iowa’s chances of getting anyone in the late signing period? — @iowafanwilliams

On the early signing day, director of recruiting Tyler Barnes told me Iowa is looking to add to the defensive line. The Hawkeyes only have a few positions they're looking to fill by Feb. 6, so they can pour a great deal of efforts into finding another defensive end. So, I'd say the chances are good.

Perhaps they're now looking for two defensive ends, though.

My conversation with Barnes came well before this Monday, when Anthony Nelson declared for the NFL Draft as a junior. The move came as a mild surprise, and it leaves Iowa with not-so-great depth at defensive end. Needs get re-evaluated constantly, and it wouldn't be a shocker if the Hawkeyes are now looking for two guys at that position after losing Nelson.

Barnes told me Iowa is open to all options for its final 2019 recruits — high school, junior college or transfers.

One name to watch is Michael Lockhart, a three-star prospect out of Birmingham, Alabama, who Iowa offered in late December. A 6-foot-5, 250-pound athlete, Lockhart's stock has blossomed after decommitting from Alabama-Birmingham on Dec. 20. Since then, he's picked up offers from Iowa, Georgia Tech, Colorado, Nebraska, TCU, North Carolina, Kansas and Rutgers. 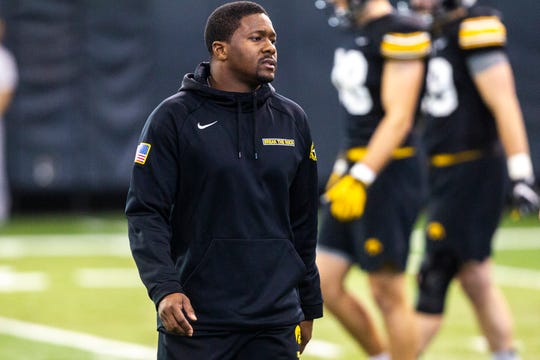 The Hawkeyes are looking to establish a presence in Alabama with running backs coach Derrick Foster, who has strong Birmingham connections thanks to his time at Samford.

Lockhart told me Iowa is "very active" in his recruitment. He's still in the process of setting up visits.

Fred Stokes, an unrated prospect out of Chicago, told me Iowa has kept up its interest since he visited in December and that they're planning on watching him work out this month. A 200-pounder in a 6-5 frame, Stokes would need some work with Chris Doyle.

Prince Okituama, a three-star prospect out of Newark, New Jersey, who emerged as a potential winter target in December, told me Iowa has stopped talking to him. He assumes he is off their radar. Recruiting coordinator Kelvin Bell visited Okituama twice in December and, at the time, Okituama said he was planning a January official to Iowa City. Okituama holds offers from Kentucky and Minnesota, among others.

A couple other names worth keeping an eye on: Deven Brantley, a three-star Georgia prospect, and Smith Vilbert, a three-star New Jersey prospect.

Has Iowa rekindled its recruitment of 2019 SF Terrence Shannon? — @ArbyNiar

If it has, Terrence Shannon isn't aware of it. On Tuesday, the four-star small Chicago small forward told me he hasn't heard from the Hawkeyes.

Shannon is a bouncy, 6-6 scorer who I watched play throughout last spring and summer with Mac Irvin Fire. I saw better basketball talents, but I didn't see many better athletes.

He was originally committed to DePaul, but he re-opened his recruitment in August. Then, in November, he narrowed his choices down to a final six of Illinois, DePaul, Texas Tech, Florida State, Georgetown and North Carolina — but he didn't sign anywhere.

Now, he's one of the best available 2019 prospects out there, although no one really knows where he'll wind up. He's currently playing a post-graduate year at IMG Academy in Bradenton, Florida.

I wouldn't be shocked if Iowa is keeping tabs on Shannon. But at this point, the kid isn't aware of any Hawkeye recruitment going on.

I asked Iowa assistant coach Andrew Francis if they were done recruiting for 2019 back in early December. He said, for now, yes — but that you always have to keep your options open. If they want to use it, the Hawkeyes will likely have a scholarship to work with if/when Tyler Cook declares for the NBA Draft.

"You have guys that you have an eye on. You have guys that you stay connected to," Francis said in December. "I try to be very honest with guys and tell them exactly where we are, and I want to honestly know where they are and what they’re looking to do. So, if a kid tells me, 'You know what, Coach, I’m going to look to sign late. I’m going to see how the season goes. If you guys are still interested late (let me know).' And I tell him, 'Absolutely. I’d love to support you and track you and see where we are in the spring.' With recruiting, you just never know."

O'Hara, Iowa's latest preferred walk-on recruit, is one of my favorite players to watch. The Dowling Catholic product starred as a linebacker at Iowa Western this season, setting a program record with 164 tackles. He's a mean, 6-2, 240-pounder built to play the mike. You don't get 164 tackles by accident. O'Hara has great instincts and is a little like Jack Campbell in the sense that he always seems to be at the heart of a play.

Back when I was doing stories on Chester Graves and Malcolm Lee, I remember Iowa Western head coach Scott Strohmeier going on and on about O'Hara — about how he was a sure-fire FBS talent, but for some reason those kinds of programs weren't biting.

O'Hara eventually did pick up FBS offers from South Alabama, Akron and Texas-San Antonio, in addition to his handful of FCS offers. I actually wrote about him a while back in a Cyclones recruiting mailbag. Iowa State is looking for another scholarship linebacker, and I thought taking a look at O'Hara certainly wouldn't hurt.

But he grew up a Hawkeyes fan, and he jumped at the opportunity to earn snaps in Kinnick Stadium.

The 7-footer out of Oskaloosa was in Ames last weekend to watch Steve Prohm's squad "manhandle" then-No. 5 Kansas in a raucous Hilton Coliseum, as Jayhawks coach Bill Self said.

I briefly talked with Xavier's dad, DaJuan, and he said their experience at the game was good and that they were glad they got so see a good game. That's their goal with these unofficial visits — to see good games, bolster relationships and get a sense of the home atmosphere. The Fosters have been to Iowa State and Iowa too many times to count, so they already have a clear idea of what each program has to offer. They know how coaches project Xavier in their system. They don't really need to hear recruiting pitches anymore. 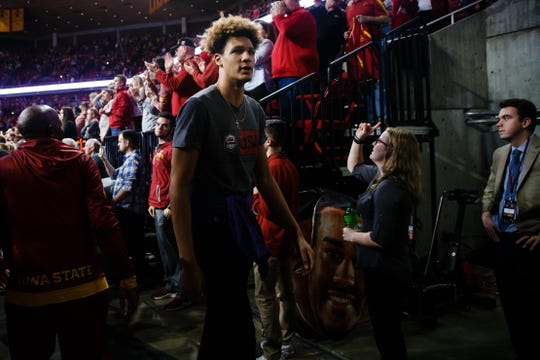 Basketball recruit Xavier Foster walks into the tunnel after the second half of the Iowa State game on Saturday, Jan. 5, 2019, in Ames. Iowa State would go on to beat Kansas 77-60. (Photo: Brian Powers/The Register)

The major players are still the same. Iowa and Iowa State are positioned well. USC was Foster's most recent official visit. We'll see how UCLA firing Steve Alford affects its recruitment of Foster. (If UCLA does stay involved, I'd think it's still a factor. It always felt like the Fosters were more drawn to Westwood, the aura of UCLA and its track record of producing pros than they were to Alford.)

Kansas is in the picture, although it hasn't been as involved as other schools.

To me, those are the five to watch, although Creighton and Baylor still have their hands in the fight for the four-star Oskaloosa 7-footer.

There are other schools in the picture, too, such as Duke and Kentucky. If Foster were to pick up an offer from either of those two, it'd likely have to come this spring or summer during AAU ball. Foster is averaging 15.3 points and 12.5 rebounds per game against Class 3A competition this season. That kind of high school dominance can keep a kid on a school's board. But programs such as Kentucky or Duke would need to see that kind of production against better competition — like he'll face this spring and summer — before moving him up the board.