The Register's Matthew Bain answers your Iowa recruiting questions in his weekly mailbag.

Iowa recruit Patrick McCaffery has been looking forward to rejoining brother Connor and being coached by father Fran. Hear him explain: Hawk Central

Back in elementary school, I won a make-an-invention competition.

Mine was a simple creation: I covered a volleyball in heavy-duty double-sided tape, attached a rope to it and called it the "Tape-Back Ball." Its purpose? To retrieve all the different balls and toys I'd lost on the roof of my family's house. You'd just sling the ball up like a lasso and hope it would stick onto something.

I bring this up because I've been binging the show "Shark Tank" lately. It's making me think of all the little ideas I've ever had.

So, if I'm ever gone from Twitter for a few days, just know that I've probably emptied my savings account to partner with a manufacturer who will help me make the Tape-Back Ball a worldwide brand.

But ... I've taken just enough of a break for this week's mailbag, and it's been a fun one to write.

Is the bowl game any indication that Iowa might be more receiver focused for stretching the field? Who are the wide out targets that could make that happen? — @tbollers

This is a good question from Trevor Bollers, former Hawkeye and father of in-state 2021 defensive end T.J. Bollers.

No, I don't think Nick Easley's 104-yard performance in Iowa's Outback Bowl win signals a change in the Hawkeyes' offensive philosophy. The guy just had a great game.

From the outside, it doesn't appear Iowa feels a need to alter how it plays offense. It still wants to operate a run-first, tight end-heavy scheme. And recruiting successes at tight end, running back and offensive line indicate the Hawkeyes know their strengths — and recruit according to them.

Put it this way: Of the next 10 Iowa recruiting classes, I'd be surprised if the receiver haul is considered "better" on paper than the incoming tight ends, offensive linemen or running backs more than two times.

"Absolutely not. No, not at all," Hawkeye director of recruiting Tyler Barnes told me in December when I asked if the staff viewed receiver recruitment as a concern. " ... We’ve got guys in this program we feel really good about. The fans don't get to see practice every day. I promise the worry isn't as bad as they make it seem like. We feel really good."

In response to Trevor's second question, Iowa Western head coach Scott Strohmeier told me Iowa is aware of slot receiver Michael Zachary, a former Dowling Catholic star who played the past two seasons for the Reivers.

There are some 2019 preferred walk-on options, too: Jackson Ritter, a receiver/tight end out of Illinois, told me he'll be visiting Iowa this weekend. The Hawkeyes have another preferred walk-on offer out to Wisconsin product Cooper Nelson.

But it seems like defense is the top remaining focus for 2019.

If you're looking for a top-tier receiver target, look toward the 2020 class.

There will no doubt be more offers to come, and more targets to watch.

More and more people in Iowa are going to start asking this question, especially when AAU ball rolls around in the spring and summer.

Rankings don't usually start until prospects hit their sophomore years, because you just can't consistently predict how kids will develop after middle school. But, outlets that do rank middle-schoolers view Biliew as a future blue-chip.

Coast2Coast Preps has him at No. 7 in the class; Global Grassroots ranks him No. 5. Remember: That's No. 7 and No. 5 in the entire country.

Biliew was born in Omaha, Nebraska, (thus, his first name) but he's lived in Iowa since he was 2. He plays for Des Moines-based AAU program Beyond Ball and will continue to do so this AAU season, when he'll have an opportunity to generate buzz against high school competition.

John Lamb, founder and director of Beyond Ball, told me they haven't yet decided which high school Biliew will attend, although it sounds like they're mostly considering public schools in the Des Moines suburbs or Des Moines-area private schools.

It's so super-incredibly-unbelievably early in his recruitment, but schools such as Washington, Louisville, San Diego State, Morehead State, Drake, North Dakota and South Dakota State have inquired about Biliew — very preliminary stuff.

Anything Iowa football D-line related ... targets, offers, transfers, some guy living in a van down by the river tell you a rumor? — @TheeJustinM

Oh, man. Thanks for the laugh, Justin. Chris Farley was a comedic wonder.

This question is obviously on a lot of Hawkeye fans' minds, too, as the program's defensive line pool has shrunk over the past few weeks — and could shrink even more, depending on what Daviyon Nixon decides to do.

Iowa Western defensive tackle Atlias Bell told me he hasn't heard from Iowa since they visited him at school last week. He said that visit went well, and that coaches told him they'd be in touch.

The Hawkeyes were also at Iowa Western to see defensive tackle Elijah James, who originally committed to Kentucky but returned to junior college this spring to finish up academically.

Three-star Alabama defensive end Ethan Rinke told me he texts with Bell every day, and he's hoping Iowa makes a decision about whether or not they'll offer him by this weekend. 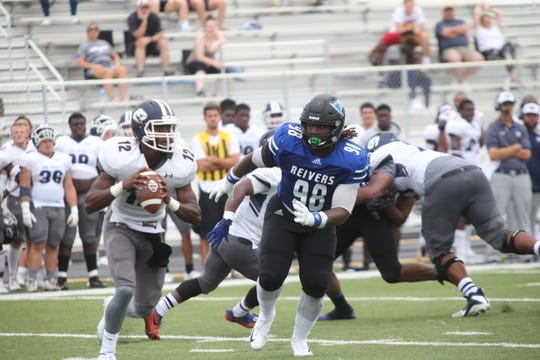 The Hawkeyes are still involved with three-star Alabama defensive end Michael Lockhart, whose stock has exploded since December.

Miles Younger, an unrated defensive end out of Georgia, told me he hasn't heard from Iowa since Bell visited him at school last week.

Outside of Xavier Foster, who is poised to have the biggest breakout in the 2020 class between now and the end of the July evaluation period? — @ArbyNiar

Foster could make some more waves this AAU season, but he has already technically broken out. So if I pick him, that's cheating.

I'm going to go with Born here. I saw him command his offense and rack up 35 points in a 65-61 win over Carlisle last week. He demonstrated marked improvement since the last time I saw him this summer, and I'm confident college coaches will see that this spring and summer, too.

Will it be enough for someone else to offer and give Drake and Northern Iowa some competition? We'll see. I think it should. 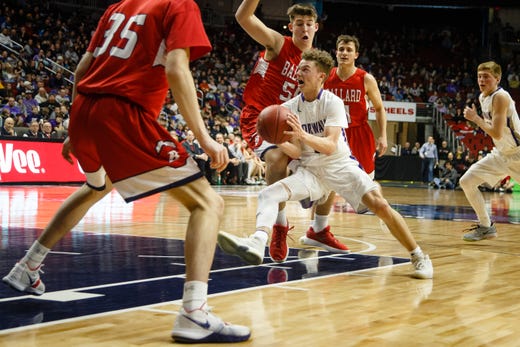 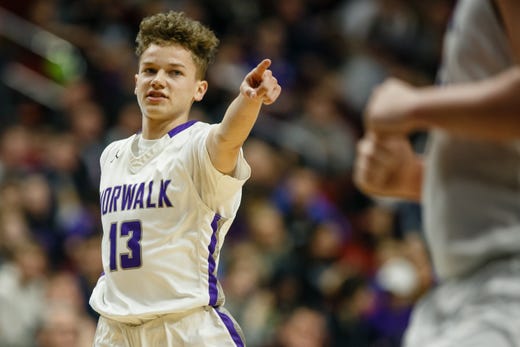 Norwalk's Bowen Born (13) points to a teammate after scoring during their boys 3A state basketball tournament game on Tuesday, March 5, 2019 in Des Moines. Norwalk takes a 50-19 lead over Ballard into halftime. Brian Powers/The Register
Fullscreen 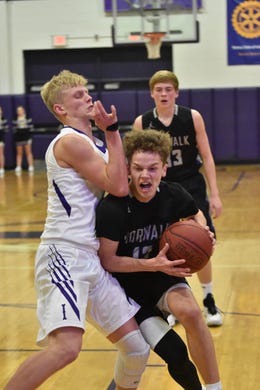 Indianola's Quinn Vesey guards Norwalk's Bowen Born. The Indianola boys slipped to 1-1 on the season with a 65-48 home loss to Norwalk on Nov. 30, 2018. Brandon Burnett/For the Register
Fullscreen 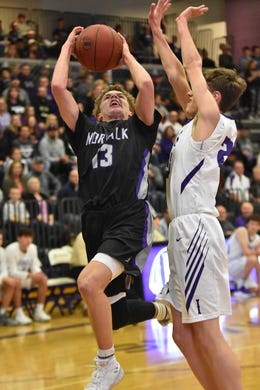 Bowen Born goes in for a layup with Indianola's Tyce Johnson defending. The Indianola boys slipped to 1-1 on the season with a 65-48 home loss to Norwalk on Nov. 30, 2018. Brandon Burnett/For the Register
Fullscreen 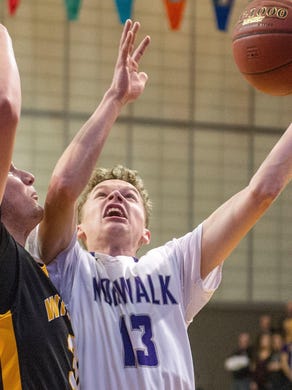 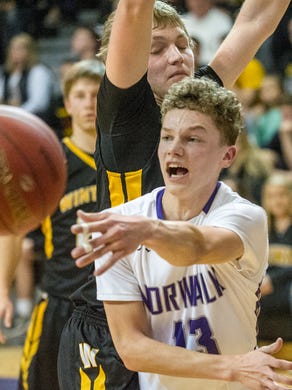 Norwalk's Bowen Born (13) drives to the basket on Jan. 31 between the Norwalk Warriors and the Pella Dutchman at Norwalk High School. Merle Laswell/For the Register
Fullscreen

One school to watch is Creighton, which just hosted Born for an unofficial visit two weekends ago. The 5-11 lefty point guard — who has also added some bounce to his game — played in open gyms at Creighton this preseason, and coaches have been showing interest ever since.

Niko Medved and his staff liked Born when they were at Drake, and they carried that interest with them to Colorado State. They haven't been as active in Born's recruitment, but I wouldn't be surprised to see Ali Farokhmanesh or JR Blount on the sidelines of one of Born's games with the Iowa Barnstormers this AAU season.

Iowa State, Nebraska and Minnesota are aware of Born. Davidson called in June. Low-majors, such as Nebraska-Omaha and Miami of Ohio, have also been involved.

That's a good chunk of schools who have Born on their radar. Once the college basketball season ends and coaches can focus more on recruiting, we'll see if things start to pick up.