"I'd like to thank my teammates and others in the community for the overwhelming amount of SUPPORT I've received the last few days," Doyle said in a tweet announcing he was entering the NCAA transfer portal.

Iowa linebacker Dillon Doyle had dreamed of making his first career start at Kinnick Stadium. It happened Saturday. How did he prepare? Listen: Hawk Central

Iowa linebacker Dillon Doyle, the son of strength and conditioning coach Chris Doyle, announced Tuesday evening that he intends to transfer out of the program.

A three-star 2018 prospect out of Iowa City West, Doyle logged 23 tackles as a sophomore this past season for the Hawkeyes.

"I'd like to thank my teammates and others in the community for the overwhelming amount of SUPPORT I've received the last few days," Doyle said in a tweet announcing he was entering the NCAA transfer portal.

Since last Friday, black former Hawkeye football players have come forward with allegations of racial discrimination they faced while playing for Iowa, and numerous accounts were centered on Chris Doyle. 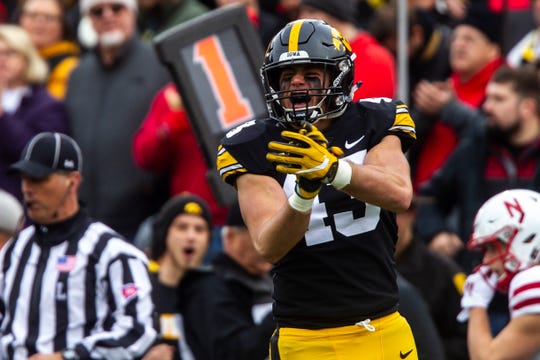 On Saturday, Iowa placed Doyle on indefinite administrative leave. And on Sunday, head coach Kirk Ferentz told reporters that athletic director Gary Barta would coordinate an independent investigation on Iowa's strength and conditioning program, which Doyle has led since 1999.

Northern Illinois, Central Florida and Harvard all recruited Dillon Doyle out of high school. But, as Chris Doyle's son, he was always considered a lock for Iowa.