Brown: Numbers aside, football a bottom-line business for Ferentz

Despite success producing NFL talent, strong academic numbers, it's all about wins for Iowa coach

Brown: Numbers aside, football a bottom-line business for Ferentz

The head coach spoke after the Hawkeyes' spring game Saturday.

Numbers can paint an optimistic picture or deliver a pessimistic counterpunch.

Since the 2009 season, which ended with Iowa's Orange Bowl victory over Georgia Tech, the Hawkeyes have had 25 players selected in the NFL Draft. Only Ohio State, with 27 picks in that six-year window, has more in the Big Ten Conference. Brandon Scherff became the Hawkeyes' fourth first-round draft pick during that time. Only Wisconsin, with five, has more.

There's a sales pitch if I ever heard one. A pitch the Iowa staff is using as they recruit the next class of Hawkeyes.

Now for the flipside.

"Putting guys in the NFL is not necessarily the right correlation to having a winning football team," Ferentz said Thursday before an I-Club stop in Burlington. "What we're interested in is putting a winning team out there."

Those two sentences pretty much sum up the state of the Iowa football program with the 2015 season less than four months away. Ferentz is feeling the heat heading into his 17th season. The past three seasons have produced a 19-19 record. Selling season tickets right now is about as easy as hawking snowblowers in Arizona. 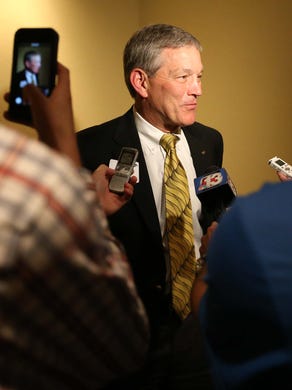 There have been a wealth of positives during the Ferentz era at Iowa, not an easy job because of the dearth of homegrown talent. Ardent support overcomes some of those negatives at Iowa, but that fan base wants more than the .500 football they've seen over the past three seasons.

During his annual I-Club tour of the state, one of Ferentz's talking points is the fact that during the last 11 seasons, Iowa ranks 13th nationally for most NFL draft picks. Of those teams, the Hawkeyes are fourth in graduation success. Penn State is the only Big Ten program ahead of them.

Ferentz is proud of those numbers. He also knows that graduation rates, good Academic Progress Rates and no major NCAA violations aren't the right correlation to having a winning football team, either.

“My wife has said that for decades. If you win, everything else is fine. And unfortunately, there’s a lot of truth in that.”

"No, the casual fan wants us to win," Ferentz said. "Pure and simple. My wife has said that for decades. If you win, everything else is fine. And unfortunately, there's a lot of truth in that."

"Our players have a better chance of graduating than they do getting drafted," Ferentz said. "We try to make that point with the guys. Program goal No. 1 is for our guys to graduate. It's about being well-rounded. But we want to win games also. It's kind of apples and oranges conversations."

With the exception of his three seasons as the head coach at Maine, where hockey and baseball were king, Ferentz has worked with the realization that wins and losses, not graduation rates, determine career longevity.

"It's always been a bottom-line business," Ferentz said.