Brown: Bazata goes from sitting to competing at Jack Trice

Brown: Bazata goes from sitting to competing at Jack Trice 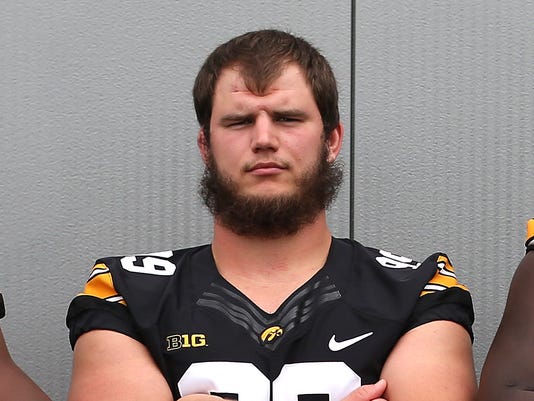 IOWA CITY, Ia. — Nathan Bazata has been to Jack Trice Stadium before. He even remembers where he sat.

Nathan was 14 years old and an eighth-grader when he joined his family for the 225-mile drive from their home in Howells, Neb., to see Iowa State open the 2008 football season against South Dakota State. Nathan’s oldest brother, Steve, was a defensive lineman for the Jackrabbits.

“We were close to the field, and I thought it was pretty sweet just sitting there,” Bazata said.

Bazata returns to Jack Trice Stadium on Saturday with an even better seat than he had in 2008. The redshirt sophomore defensive tackle will start for Iowa against the Cyclones.

“That was the biggest stadium I’d ever been to,” said Bazata, who played eight-man football at Howells-Dodge. “I think we drove there and came home on the same day, if I remember right. If I’m not mistaken, it was a Thursday and I had to go to school the next day.”

Bazata’s memory is spot-on. It was a Thursday. The Cyclones won, 44-17. Iowa State never recruited Bazata, but Iowa did. Assistant coach Reese Morgan, who has mastered the art of finding prospects off the beaten path, discovered Bazata.

“We have to look places where maybe some other folks don't or we have to look a little closer at some things,” Iowa coach Kirk Ferentz said. “And Reese does it as well as anybody I've ever been around. He just sees things in players, and if he mentions something twice about a guy, then you really need to pay attention because he's subtly trying to tell you something.”

Morgan loves athletes who play multiple sports. Bazata fit the bill. He was named the Omaha World-Herald’s Nebraska boys athlete of the year as a senior. He won a state wrestling title and finished 43-0. He was a state shot put champion and the only Nebraska athlete in any class to eclipse the 60-foot mark. He played on two state football title teams during his career.

And now he’ll be making his second collegiate start on the same field where he watched his brother, now the head football coach at Tri-Valley High School in Colton, S.D., play the game they love.

Bazata and Jaleel Johnson are replacing tackles Carl Davis, now with the Baltimore Ravens, and Louis Trinca-Pasat, who's on the St. Louis Rams practice squad. Like Bazata, Johnson made his first career start last week against Illinois State.

“Both Nathan and Jaleel did a nice job, and hopefully that'll be a springboard to better things,” Ferentz said. “But it was a good start, certainly.”

The size of the town you come from means nothing if the motor doesn’t run inside.

“Nathan has got a lot of the traits a lot of our really good players have had,” Ferentz said. “He's really serious, he's focused, he works hard. He's not perfect, certainly, but one thing about him, I know when I go to bed every night, he's thinking about getting better. And that's what he's going to try to do during his career.”

Strong words from a coach who will be taking part in his 26th Cy-Hawk game on Saturday. It will be Bazata’s first, but his second trip to Ames.

“To me, his best football is still ahead of him,” Ferentz said.