The Iowa quarterback takes stock of the state of the team heading into its bye week.

They also got the desired result, but not without an unexpected struggle.

The Hawkeyes overcame a sluggish first half on offense, which included Beathard throwing an interception that was returned for a touchdown, to defeat Purdue 24-10 before an announced crowd of 36,603 at Ross-Ade Stadium.

"We did some things that weren't so good in the first half, but a lot of that's a credit to (Purdue)," Iowa coach Kirk Ferentz said. "Then, of course, we settled down and played a little bit better in that second half.

"So I'm just happy to get the win and I'm proud of our guys' effort and we're going to get back to Iowa City to regroup."

Iowa, which entered Saturday's Big Ten opener as a nine-point favorite, took its first lead of the game when Beathard threw a 23-yard touchdown pass to senior receiver Kevonte Martin-Manley with 45 seconds left in the third quarter. Solon native Marshall Koehn converted the extra-point kick to give Iowa a 17-10 lead after three quarters.

Martin-Manley's touchdown was initially ruled out of bounds, but the call was reversed by instant replay.

The Hawkeyes' quarterback hit receiver Kevonte Martin-Manley, who was initially ruled out of bounds, on the play.

The Hawkeyes expanded their lead to 24-10 when Mark Weisman scored on a 5-yard run with 5:10 left in the fourth quarter. Weisman's touchdown capped a 12-play, 79-yard drive that chewed 5:26 off the game clock.

Iowa improved to 4-1 overall with Saturday's victory. It was Iowa's fourth win in its last five games against Purdue, which fell to 2-3 under second-year coach Darrell Hazell.

Beathard completed 17-of-37 passes for 245 yards and one touchdown in his first career start for the Hawkeyes. His pick six came in the first quarter when Purdue strong safety Frankie Williams returned an interception 39 yards for a touchdown with 4:13 left in the quarter.

"It was a tough start for him, obviously," Ferentz said of Beathard. "That's really a positive when you hit some turbulence and bounce back from it. So I thought he handled it well, and I thought the team handled it well."

Iowa now enters the first of two bye weeks this season and it couldn't come at a better time, with the Hawkeyes nursing several injuries.

In addition to starting quarterback Jake Rudock missing Saturday's game because of an injury, Iowa also was without several key players on offense, including receiver Matt VandeBerg and running back Damon Bullock. Junior fullback Macon Plewa also missed his third game in a row because of an undisclosed injury.

"Bye weeks always come at a good time," said Weisman, who led Iowa with 76 rushing yards on 24 attempts. "It's football. Someone is going to be injured.

"So it's good to get some rest. But we also need to improve this week."

The Iowa defense dominated from start to finish, holding Purdue to just 156 total yards, including 56 yards in the second half. Iowa collected five sacks and had four tackles behind the line of scrimmage.

The Boilermakers finished with the sixth fewest yards against an Iowa defense under Ferentz, who is in his 16th season as head coach,

Iowa senior strong safety John Lowdermilk was on the verge of returning an interception for a touchdown in the closing seconds of the fourth quarter, but he took a knee instead.

"I think we're improving," Iowa senior defensive tackle Louis Trinca-Pasat said. "The younger guys are stepping up. It was a good game plan by our coaches and we had three good practices, and that's what we have to keep doing week in and week out."

Saturday's game played out similarly to the previous week, when Iowa used a balanced attack in the second half to defeat Pittsburgh 24-20 at Heinz Field in Pittsburgh. The Hawkeyes trailed that game 17-7 at halftime.

Beathard said the challenge facing Iowa now is to play a complete game for 60 minutes.

"One of these games we're going to come out and play a full 60," Beathard said. 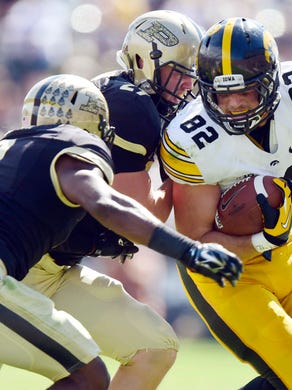 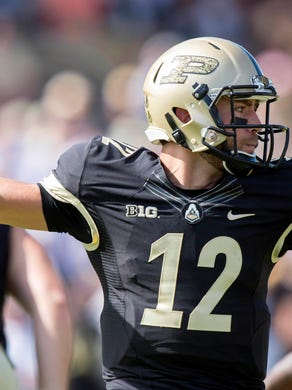 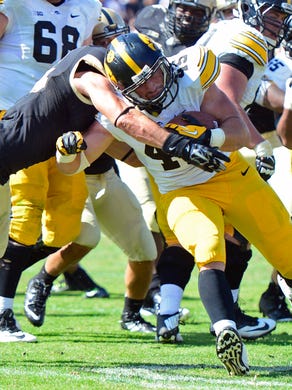 Sep 27, 2014; West Lafayette, IN, USA; Iowa Hawkeyes running back Mark Weisman (45) is hit by Purdue Boilermakers safety Landon Feichter (44) before going into the end zone for a touchdown during the second half of the game at Ross Ade Stadium. The Iowa Hawkeyes beat the Purdue Boilermakers 24 to 10. Mandatory Credit: Marc Lebryk-USA TODAY Sports Marc Lebryk Marc Lebryk-USA TODAY Sports
Fullscreen

Purdue running back Akeem Hunt is tackled from behind Iowa defensive back John Lowdermilk after a 1-yard gain during the first half of an NCAA college football game in West Lafayette, Ind., Saturday, Sept. 27, 2014. (AP Photo/Michael Conroy) Michael Conroy AP
Fullscreen 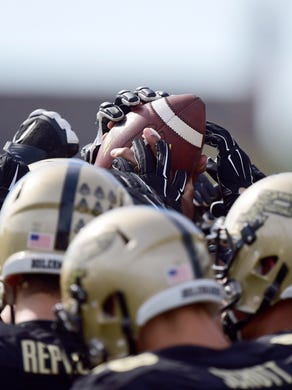 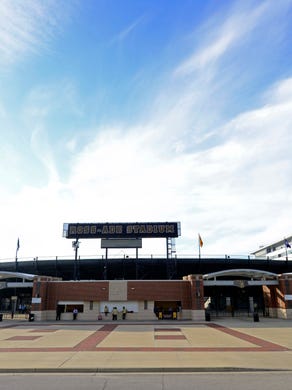 A certain segment of the Iowa fan base was clamoring for Beathard to start after the Iowa offense struggled in the first three games. However, Ferentz stuck with Rudock until the injury prevented Rudock from playing Saturday.

Beathard completed less than 50 percent of his passes during Saturday's game, but his receivers also dropped at least six passes.

"You just have to be positive," Beathard said. "That happens. Bad throws happen. Missed blocks happen.

"We just knew we weren't going to let this game get away from us. Our defense played great and we ended up winning the game."

A 9-yard run by Jordan Canzeri and a 14-yard pass from Beathard to Martin-Manley gave Iowa a first down at the Purdue 2.

Weisman then bulled into the end zone and Koehn converted the extra-point kick, trimming Purdue's lead to 10-7 with 8:15 left before halftime.

Koehn also made a 28-yard field goal with 13 seconds left in the second quarter to tie the score at 10-10 at halftime.

Iowa drove from its own 12-yard to the Purdue 10, but the drive stalled after back-to-back incompletions on second and third down. Beathard completed 5-of-8 passes for 69 yards on Iowa's final drive of the first half.