The safety came to Iowa City as part of a recently established recruiting pipeline to Maryland.

Jordan Lomax on what it means to return to play in his home state.

"My dad wanted me to make the right decision for me," Lomax said Tuesday. "But my mom, she's a little emotional, she didn't want me traveling this far.

Lomax came to Iowa City as part of a recently established recruiting pipeline to Maryland. A starter at free safety, Lomax is one of seven Maryland natives on the Hawkeyes' 2014 roster.

His family will be out in force on Saturday when Iowa (5-1, 2-0 Big Ten) faces new conference member Maryland (4-2, 1-1) for the first time ever in football. Lomax said expects to have at least 70 relatives cheering him on at Byrd Stadium in College Park, Md.

Lomax is from Upper Marlboro, Md., which is adjacent to Washington, D.C., from the east and about a 35-minute drive from the site of Saturday's game on the Maryland campus. He knows all about the Terrapins from attending perennial basketball power DeMatha High School, which is located in Hyattsville, Md., and just a short bounce pass from College Park.

Iowa defensive back Jordan Lomax celebrates after recording a tackle for a loss during a game against Northern Illinois University at Kinnick Stadium on Saturday, Aug. 31, 2013. Charlie Litchfield/The Register
Fullscreen 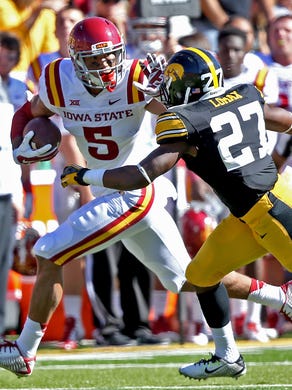 Iowa defensive back Jordan Lomax celebrates after recording a tackle for a loss during a game against Northern Illinois University at Kinnick Stadium on Saturday, Aug. 31, 2013. Charlie Litchfield/The Register, Charlie Litchfield
Fullscreen

The 5-foot-10, 200-pound junior is thrilled for the chance to play in front of his family and friends, but he won't let it become a distraction.

"I try to take care of any family situations at the beginning of the week," Lomax said. "So now my focus is on strictly preparing for Maryland and when the time comes for the game, the family won't be a distraction.

"It's just going to be about executing my assignments when I'm out there on the field."

Lomax is part of a Maryland recruiting pipeline that so far has produced mixed results. Running back Marcus Coker, defensive lineman Anthony Ferguson and linebacker Jim Poggi arrived in 2010 to get the pipeline pumping.

Coker was flirting with stardom when he quit the Iowa team in January 2012 for reasons that still are unclear. Coker was the Big Ten's second leading rusher as a sophomore in 2011 with 1,384 yards and he rushed for 622 yards, including 219 yards against Missouri in the 2010 Insight Bowl, while appearing in seven games as a true freshman.

Coker has since transferred to Stony Brook, where he is now playing as a fifth-year senior.

The playing careers of Ferguson and Poggi never materialized at Iowa. Ferguson quit the team after just one season, while Poggi's career was hampered by injuries.

Another Maryland native, defensive back Nico Law, also quit the Iowa team during this past offseason.

But even with those setbacks, the Iowa coaches have continued to make Maryland a recruiting priority.

Lomax's initial plan for college had him staying closer to home after he committed to nearby Virginia. But once he decided to explore other options, Iowa became his top choice.

"I was committed to Virginia and Maryland did recruit me," said Lomax, who ranks second on the team with four pass break-ups and fifth in tackles with 34. "But I loved Iowa more. It was a better atmosphere. It felt like a better gameplan, the Big Ten Conference. I felt like it was a better chance to compete against better teams."

Lomax has found at home at free safety after playing cornerback last season. He was expected to start, but then was injured and lost the job to then true freshman Desmond King.

Lomax has started five of six games this season, the only exception being at Pittsburgh on Sept. 20, when he sat the first half as part of his punishment for a targeting fall against Iowa State on Sept. 13.

Away from football, Lomax has thrived in the classroom, earning academic all-Big Ten accolades last season. He is also one of three juniors on Iowa's 2014 leadership group.

He said he looks forward to competing for local bragging rights with some of his Terrapins acquaintances.

"When Maryland came into the Big Ten Conference and I saw our schedule, I thought it was pretty cool that I get a chance to play in front of my family," Lomax said. "I know a handful of guys on their team. We always want to go out there and get the win. But it also is a little special to get a win against your friends."