Why have the Hawkeyes had so much success on the road? 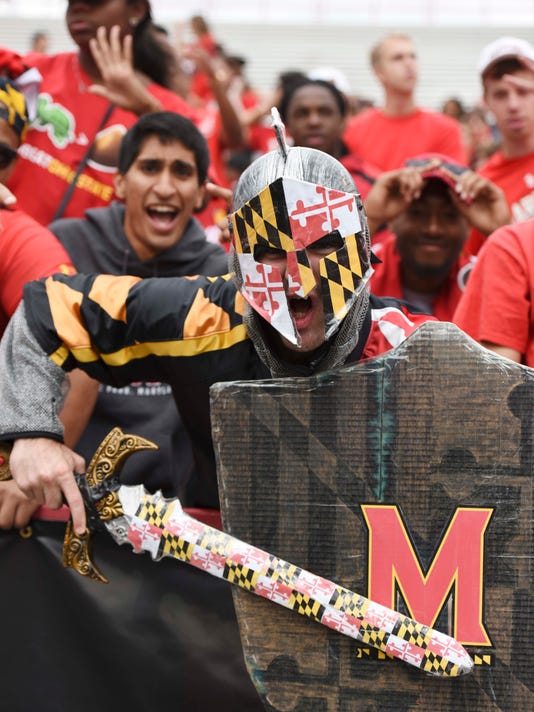 Maryland Terrapins fans cheer prior to the game against the Ohio State Buckeyes at Byrd Stadium.(Photo: Tommy Gilligan-USA TODAY Sports)

"I love when we come out and everybody is booing us," Davis said with a grin. "You hear all that smack talk, and I build energy off of it."

Swagger travels well, and it's a primary reason the Hawkeyes share the Big Ten lead for most road victories over the past season and a half. Ohio State (6-0), Iowa (6-1) and Maryland (6-2) all have a half-dozen wins away from home since the beginning of the 2013 season.

Hawkeyes safety explains why Iowa is 6-1 on the road since last season.

"Honestly, when you go play on the road there are a lot less distractions," Hawkeye safety John Lowdermilk said. "We really go in with the mindset that it's just us, nothing else that really matters."

This is Iowa's maiden voyage to College Park, where the Terrapins have hosted just one sellout since 2008.

Another triumph for the Hawkeyes (5-1, 2-0 in the conference) would cement their status as a contender in the Big Ten's West Division.

"Typically, if you've got a bad team, you're going to play poorly on the road," Iowa coach Kirk Ferentz explained. "I think it's a mental approach you take. If you want to use that as a crutch for not playing well, you can do it.

"That being said, it can be challenging, especially if you get crowd noise and all that stuff going. …That's not much fun."

Occasionally, though, the results are more inviting than what's taken place in Iowa City.

"You put so much effort into it, but wins don't come easy or often sometimes," running back Mark Weisman said. "You've got to cherish each one of them. It doesn't matter if it's home or on the road."

The Hawkeyes own a plus-8.6 point differential in their last 11 home games, including a 59-3 rout of Western Michigan last season.

In the last seven road games, the point differential improved to plus-10.7.

"Ever since high school, I've liked going and playing against opposing crowds," Lowdermilk said. "I don't know what it is, just that extra focus that I have. I don't know if it motivates me more, or something. I feel like there is no better feeling."

He's not the only one who thrives on hostile circumstances.

"As the defense, we feel like the bad guys going in there," Davis said. "There's nothing like going into somebody's house and getting a W."

To get that W this afternoon, the Hawkeyes must slow a Maryland offense averaging 34.7 points and nearly 400 yards.

Junior receiver Stefon Diggs leads the Terrapins with 36 receptions for 450 yards and has caught a pass in 24 consecutive games.

"The away games are tough," Hawkeye tailback Jordan Canzeri said. "There's a lot of things you can think about, and you can let get into your head.

"We all know we have to remain calm and focused, just rely on what we've been practicing throughout the week."