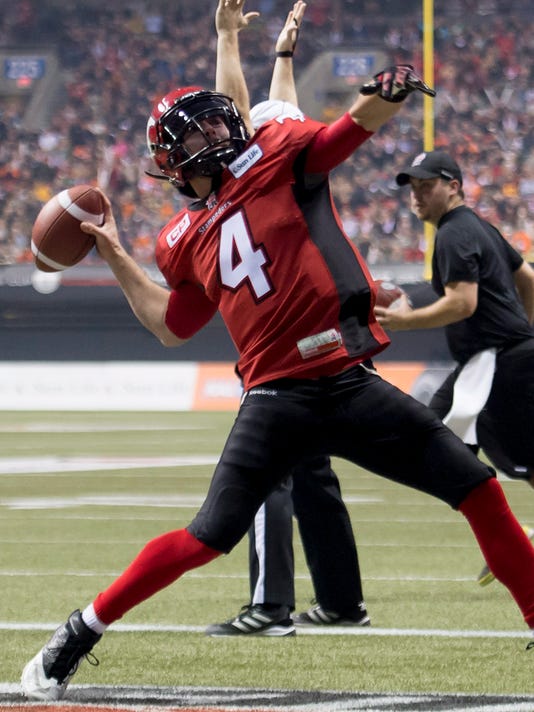 VANCOUVER, British Columbia — Hamilton star Brandon Banks' 90-yard punt return for an apparent go-ahead touchdown with 35 seconds left was wiped out by an illegal block, and the Calgary Stampeders held off the Tiger-Cats 20-16 on Sunday night in the Grey Cup.

Banks stormed out of the Hamilton locker room as the media waited to get in. Several reporters tried to get a comment, but he kept moving. The former Washington Redskins speedster just looked back and said: "I ain't talking to nobody."

Hamilton linebacker Taylor Reed was penalized for the block.

"I didn't make my block," Reed said. "I made it close enough that they called a penalty on it. That's 100 percent my fault. I've got to be better than that."

"You know I can't answer that," Austin said. "And quite frankly I'm not in a position right now to answer that. That's the honest truth. I have to look at the play. I haven't reviewed it. I haven't looked at it on film. But I know a lot of things happen on special teams in this league. A lot of things. Some get called, some don't get called. Almost every single play on special teams, a lot of stuff happens. I will say that."

The historic trophy was damaged as the Stampeders celebrated, with the top coming loose from the base.

"I think I'm the one that did it," Calgary linebacker Juwan Simpson said. "I don't know. I grabbed it and was excited, and all of a sudden, it got a little (loose.) Some glue and some duct tape and it'll be good."

"This is something I worked my entire life for," Mitchell said. "To come to the Grey Cup and have a game like this and have the guys do what we did tonight after so much work, it's such an indescribable feeling."

"I'm not the same person without him," Mitchell said. "That guy gets me so prepared, there's no stone unturned. He is a dangerous coach to have on your team. When you do, you're not going to lose very often."

Hamilton's Zach Collaros threw for 282 yards and a touchdown, a 45-yarder to Banks late in the first half.

After Paredes' 20-yard field goal made it 20-7 in the third quarter, Hamilton's Justin Medlock connected from 25, 12 and 37 yards in the fourth.

"Our defense played well," Calgary coach and general manager John Hufnagel said. "They made an unbelievable stop when the Tiger-Cats had the ball at the 3-yard line, forced them into a field goal. They tried two running plays and both were stuffed."

Paredes had to handle punting duties in the second half after Rob Maver sustained an abdominal injury on Justin Hickman's blindside block on a return.

Hamilton lost the title game for the second straight year after falling to Saskatchewan 45-23 last year in Regina, Saskatchewan. The Tiger-Cats won their last championship in 1999 when they beat the Stampeders 32-21 in Vancouver.

"Sometimes things don't work out. Welcome to the game of life," Austin said. "It's not always going to go our way."

Hamilton's Andy Fantuz was honored as the outstanding Canadian. He had six catches for 81 yards.

"We're just going to have to get back to the drawing board and remember this for next year," Fantuz said.