The Hawkeye great reflects on the 1982 Peach Bowl, 1983 Gator Bowl and this year's Iowa team. 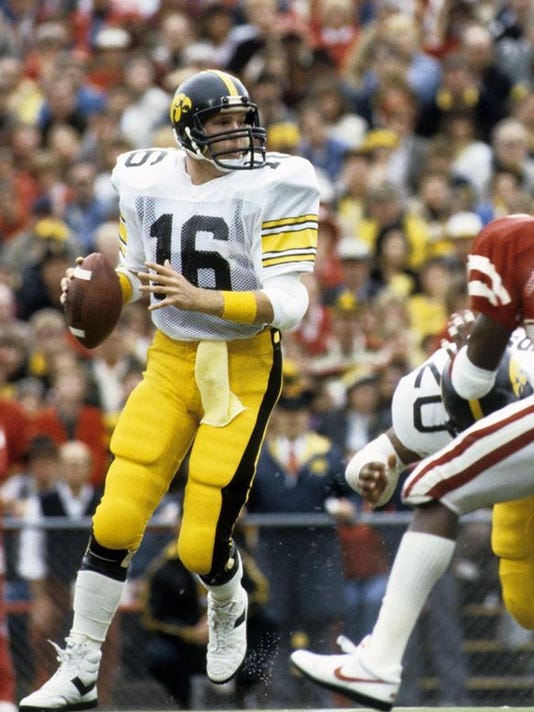 Everything about Iowa's bowl matchup against Tennessee rekindles memories — and unique perspective — from Chuck Long.

Regarding Iowa's first trip back to the Gator Bowl since 1983, Iowa's all-time leading passer and 1985 Heisman Trophy runner-up joked that he's glad they changed the name to the TaxSlayer Bowl.

"One of my worst games as a Hawkeye," Long said, recalling his four-interception performance in Iowa's 14-6 loss to Florida amid unseasonable sub-freezing wind chills in Jacksonville, Fla.

"It was bone-chilling cold, and what I like to remember more than the Gator Bowl is the opponent. I had a much better game against Tennessee the year before."

Absolutely he did. And it was a program-changing performance.

Grizzled Hawkeye fans probably recall Long's second TD pass, one of the game's signature moments. On third-and-4 from Tennessee's 18 in a 7-7 game, Long scrambled right and heaved the football toward the back of the end zone. Ronnie Harmon, then a freshman, snatched the ball in double coverage and kept one foot in bounds for a touchdown.

Perfect execution? Not quite.

"I was trying to throw the ball away," Long said. "I did not see Ronnie at all. … I was throwing off my back foot with pressure trying to get the ball out of bounds."

Long's arm strength would improve over the next several years, as would the perception of the Iowa program.

What Hawkeye fans probably forget about that Tennessee game was that Iowa was still a program looking for validation under fourth-year coach Hayden Fry. Sure, Iowa had gotten to the Rose Bowl the year before — but that team lost four games, including by a 28-0 score to Washington in Pasadena, Calif.

FacebookTwitterGoogle+LinkedIn
Nashville Then: Tennessee vs. Iowa in 1982 Peach Bowl
Fullscreen 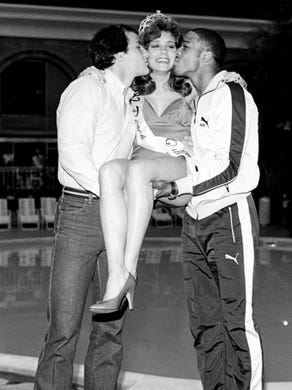 Tennessee students and fans, part of an Atlanta-Fulton County Stadium crowd of 50,134 that postponed their New Year's Eve partying long enough to watch the Vols meet Iowa in the Peach Bowl on Dec. 31, 1982. Ricky Rogers / The Tennessean
Fullscreen

Speedy Tennessee All-American Willie Gault (26) returns one of his four kickoff returns against Iowa during the 1982 Peach Bowl in Atlanta. The Hawkeyes did a good job of keeping the ball of out Gault's hands. He generated just 23 yards on the four kickoff returns and was never able to return a punt as Iowa punter Reggie Roby kept kicking the ball out of bounds. Ricky Rogers / The Tennessean
Fullscreen

Tennessee running back Chuck Coleman (35) finds some running room against Iowa during the 1982 Peach Bowl. Ricky Rogers / The Tennessean
Fullscreen 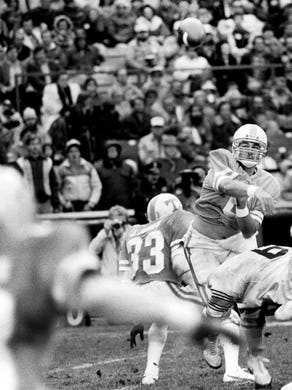 Tennessee quarterback Alan Cockrell passes to receiver Mike Miller (88) after getting a great block from back Doug Fumas (31) in the 1982 Peach Bowl. Ricky Rogers / The Tennessean
Fullscreen

Iowa linebacker Mike Yacullo (39) and defensive end Dave Strobel (97) throw down Tennessee running back Chuck Coleman (35) in the 1982 Peach Bowl. Coleman later scored on a 10-yard run, but it wasn't enough as the Vols fell 28-22. Ricky Rogers / The Tennessean
Fullscreen

Tennessee wide receiver Darryal Wilson (87) grabs grabbed from behind by an Iowa defender after catching a pass. Ricky Rogers / The Tennessean
Fullscreen

Tennessee quarterback Alan Cockrell runs past Iowa defensive back Ron Hawley (19) into the end zone on a 10-yard touchdown keeper in the first quarter. Ricky Rogers / The Tennessean
Fullscreen

Tennessee sophomore quarterback Alan Cockrell (6) takes a break while the defense is on the field. Ricky Rogers / The Tennessean
Fullscreen

Playing and beating a talented team from the Southeastern Conference was what effectively put Hawkeye football on the national map.

"It proved we belonged with the big boys. We weren't sure of that after the Rose Bowl loss the year before."

Thirty-two years later, the Iowa program finds itself in a new era but a similar position. After five consecutive lukewarm seasons under 16th-year coach Kirk Ferentz — Iowa has gone 34-29 since the 2009 team garnered the program's only BCS bowl victory (the Orange) since the 1959 Rose — there is curiosity about the state of Hawkeye football.

Long, now a Big Ten Network analyst, understands that there are a lot of unsettled Hawkeye fans after this year's team assembled a 7-5 record against a schedule that included just one top-20 opponent (Wisconsin).

Even though Tennessee brings a 6-6 record and a very young roster (24 true freshmen have played this season) to Jacksonville, Iowa comes into the game as a 3.5-point underdog.

Iowa receiver Kevonte Martin-Manley tiptoes up the field for extra yards after being hit by a host of Ball State defenders on Saturday, Sept. 6, 2014, at Kinnick Stadium in Iowa City, Iowa. Bryon Houlgrave/The Register
Fullscreen 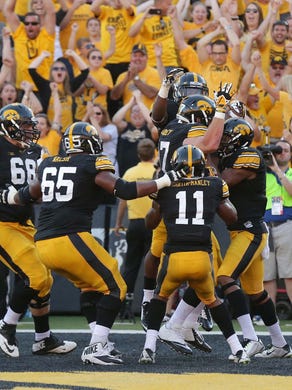 Iowa Hawkeyes defensive back John Lowdermilk (37) celebrates with defensive back Anthony Gair (12) after Gair intercepted the ball to end the game against the Pittsburgh Panthers at Heinz Field. The Hawkeyes won 24-20. Charles LeClaire-USA TODAY Sport
Fullscreen

Iowa Hawkeyes wide receiver Kevonte Martin-Manley (11) catches a ball against Purdue Boilermakers cornerback Antoine Lewis (23) which required being reviewed by the referred and was eventually awarded as a touchdown during the second half of the game at Ross Ade Stadium. Marc Lebryk-USA TODAY Sports
Fullscreen

Iowa's Akrum Wadley runs the ball against Northwestern during the second half of the game Saturday, Nov. 1, 2014 at Kinnick Stadium in Iowa City, Iowa. Zach Boyden-Holmes/The Register
Fullscreen

Iowa's Ben Niemann scores a touchdown on a blocked punt against Northwestern in the first half Saturday, Nov. 1, 2014 at Kinnick Stadium in Iowa City, Iowa. Zach Boyden-Holmes/The Register
Fullscreen

Iowa Hawkeyes running back Mark Weisman (45) rushes with the ball as Minnesota Golden Gophers defensive back Eric Murray (31) attempts to make a tackle in the first half at TCF Bank Stadium. Jesse Johnson-USA TODAY Sports
Fullscreen 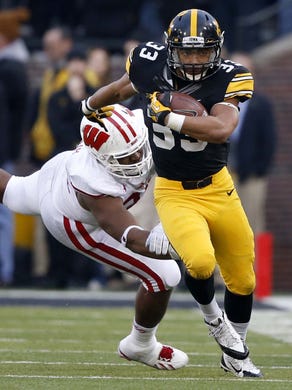 Iowa's John Lowdermilk (37) takes an interception in for a touchdown during an NCAA college football game against Nebraska on Friday, Nov. 28, 2014, at Kinnick Stadium in Iowa City, Iowa. Charlie Litchfield/The Register
Fullscreen

Iowa lineman Brandon Scherff carries the ball during a trick play at the end of regulation during an NCAA college football game against Nebraska on Friday, Nov. 28, 2014, at Kinnick Stadium in Iowa City, Iowa. Charlie Litchfield/The Register
Fullscreen

In other words, the perception of Iowa football needs a jolt, especially among those who buy the tickets. While Tennessee quickly sold out its 8,000-ticket allotment for the TaxSlayer Bowl, Iowa was struggling a week later to reach 4,000.

"They have a chance to excite the fan base again," Long said. "It's a game they need to do that. I think that's key for that staff and just to get back (momentum). And there's nothing like a bowl victory to do that."

Another thing beating Tennessee would accomplish is to square Iowa's Gator/TaxSlayer record to 1-1.

That importance is not lost on the most decorated quarterback in Hawkeye history.

"It's a memory I like to forget," Long said, "Hopefully they can correct it. Which is a beautiful thing."

Here's what Hawkeye reporter Chad Leistikow and columnist Rick Brown are looking for leading up to Iowa's Jan. 2 TaxSlayer Bowl game against Tennessee.