The son of head coach Kirk Ferentz will be the team's run-game coordinator, in addition to staying as offensive line coach. 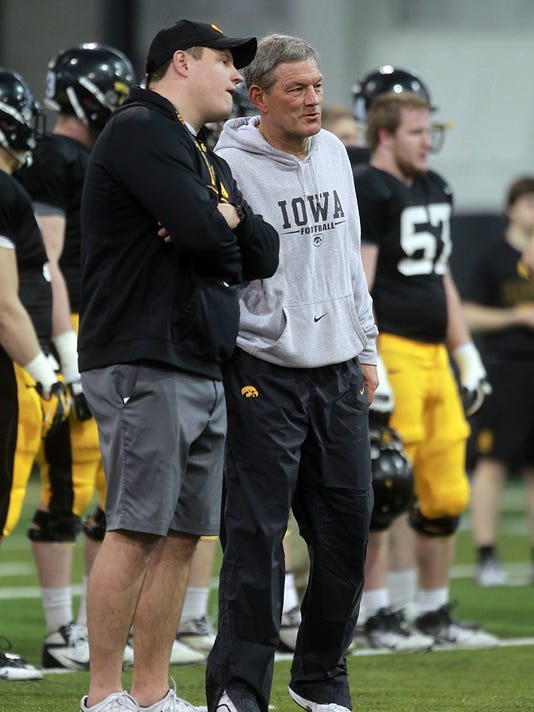 The Hawkeyes finished fourth overall in the Big Ten Conference last season at 417.2 yards per game, but were seventh in rushing (168.8 ypg) despite having Outland Trophy winner Brandon Scherff at left tackle.

Plain and simple, the 2014 rushing attack lacked explosiveness. Of Iowa's 514 rushes, one went for 40-plus yards — a 60-yard touchdown by Jonathan Parker on a jet sweep.

Kirk Ferentz hadn't assigned a run-game coordinator in his first 16 years as Iowa's head coach. He said last week that he didn't expect any assistant-coach firings, but "there might be some changes in seats" following a 7-6 season that athletic director Gary Barta said failed to meet expectations.

The run-game shakeup comes about a month after one in the passing game. On Jan. 8, six days after being routed by Tennessee in the TaxSlayer Bowl, Ferentz announced that C.J. Beathard would be the first-team quarterback entering spring practice over Jake Rudock, who has started 25 of Iowa's last 26 games.

There was no mention of offensive coordinator Greg Davis in Thursday's press release issued by the University of Iowa, meaning he and Brian Ferentz will likely team up to run the offense.

LeVar Woods will move from coaching Iowa's linebackers to tight ends. That leaves Jim Reid as the team's lone linebackers coach. D.J. Hernandez, who had been in charge of the tight ends as a graduate assistant, was not mentioned in the press release.

The changes are effective immediately.

"I believe these adjustments in coaching responsibilities will add to our efficiency and productivity as a staff," Kirk Ferentz said in a statement. "We have an outstanding group of teachers and we look forward to the challenge of building a strong 2015 Hawkeye football team."