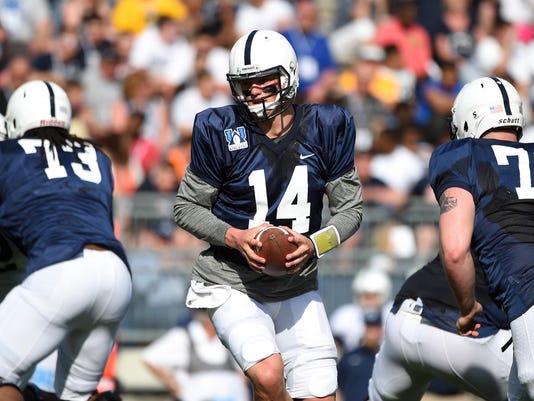 Penn State's defense was miles ahead of the offense in 2014. For most the season, at least.

The Nittany Lions did give up 34 points to Michigan State in their final Big Ten game, and 30 points to Boston College in a Pinstripe Bowl victory. Those are impressive accomplishments against a Penn State defense that finished the season second nationally in total defense, third in rushing defense and seventh in scoring defense.

Seven members of that defense return, including first-team all-Big Ten defensive tackle Anthony Zettel. He had 17 tackles for a loss and three interceptions in 2014. The other tackle, Austin Johnson, is also back. So defense should not be an issue in Happy Valley. The offense is another story.

Quarterback Christian Hackenberg returns for his junior year, hoping for more time to use his gifted arm to find potent receivers like DaeSean Hamilton. The offensive line was a major issue last season, and continues to be heading into 2015.

The Nittany Lions weren't better than 7-6 overall and 2-6 in the East Division because of the offense. Penn State was last in the Big Ten in scoring offense (20.6 points) and rushing offense (101.9 yards) and 13th in total offense (335.3). That was crucial in a season when eight of the Nittany Lions' 13 games were decided by one possession.

Hackenberg's 229 passing-yards-per-game ranked third best in the Big Ten, but he was just 10th in pass efficiency at 109.4. He also threw a Big Ten-high 15 interceptions. And a lot of times, he was running for his life instead of setting his feet and using his passing skills.

"We're way ahead of where we were at this point last year," coach James Franklin said. "It wasn't going to be like we were going to be able to flip a switch, and it's going to change overnight."

Their development will be key in Penn State returning to its running ways. Junior running back Akeel Lynch is expected to be the leading weapon on the ground. He finished with a team-best 678 yards rushing last season even though he started just two games.

Still to be settled

Hackenberg was not consistent as a sophomore, but guys like Hamilton will give him an opportunity to take advantage of his passing touch. Hamilton's 82 catches last season as a redshirt freshman were the most of any Big Ten player. He accounted for 899 yards and two touchdowns. Geno Lewis (55 catches, 751 yards, 2 TDs) is another threat.

Tight end looks to be another position of strength, with Kyle Carter, Mike Gesicki and Brent Wilkerson all experienced players. Adam Breneman, who missed the entire 2014 season to injury, is also back.

The defense should be a tough customer for Penn State opponents this season ... especially if the offense can avoid too many three-and-outs (Penn State had 42 of those last season). If that happens, it means the offensive line has taken a step forward. If it doesn't, and Hackenberg is running for his life back there, this could be an average season despite the defense and an uber-talented QB.

AROUND THE BIG TEN

In advance of the conference's media days July 30-31, Hawk Central is examining the prospects of each program in the league. Find the stories first at HawkCentral.com.