Around the Big Ten: Schedule, Beathard give Iowa chance to rebound

The Hawkeyes have a lot of primary plots in 2015: Fan unrest, Ferentz and C.J. Beathard. All of it hinges on winning.

Around the Big Ten: Schedule, Beathard give Iowa chance to rebound 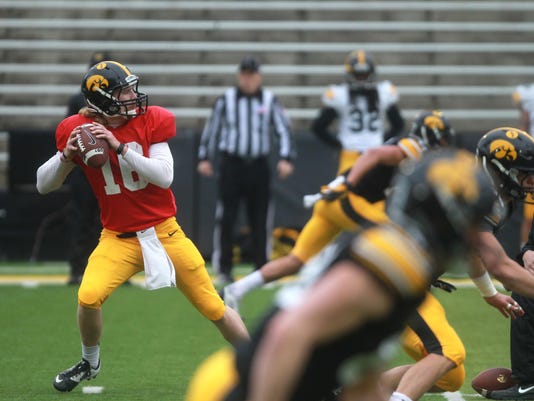 C.J. Beathard is the guy at quarterback for Iowa, with untested freshman Tyler Wiegers his backup. How he performs will be key to the Hawkeyes’ 2015 success.(Photo: David Scrivner/Iowa City Press-Citizen)Buy Photo

There are so many primary plots to the 2015 Iowa Hawkeyes football team, it’s hard to know where to start.

There’s the embattled 17th-year head coach facing a crossroads season and a friendly schedule. There’s the stunning quarterback shuffle. There’s the fan unrest, joined at the hip with the slumping season ticket sales.

Kirk Ferentz might have perfectly summarized all of those issues in a single quote following the spring game April 25, his most recent formal press conference.

“Fans in Iowa, they want to support the football team. I don’t think that’s changed. It’s our job to give them a reason to support it,” Ferentz said. “That’s where our focus is. We’ve got to put a team out there that they can be proud of, that they’re going to enjoy watching.”

Whether that happens hinges on the quarterback, offensive line development and (absolutely) the schedule.

As is Ferentz tradition, only Iowa seniors will be brought to Big Ten Media Days, which begin Thursday in Chicago. So, the most important and interesting player in the program — junior QB C.J. Beathard — won’t be fielding questions from local and national reporters.

Beathard, the free-wheeling, big-armed Tennessean, was anointed as the starter on Jan. 8 — on the heels of rumors he would transfer and six days after outperforming two-year starter Jake Rudock in the TaxSlayer Bowl defeat. Rudock instead became the disgruntled QB, and when he fled to Michigan, Beathard became entrenched as Iowa’s key-holder for not only 2015 but 2016.

You can’t read much into Beathard’s spring-game performance (17-for-32, 168 yards on a cold, windy day amid purposefully vanilla play calls), but there’s concern since the first-team offense only scored one touchdown — that coming late against a defense of second- and third-teamers.

The glass-half-full spring buzz was that this defense looked markedly improved from the TaxSlayer shredding (a 45-28 loss to Tennessee) in Jacksonville, Fla. Between experienced defensive ends in Drew Ott and Nate Meier, and starting sophomore linebackers Ben Niemann, Josey Jewell and Bo Bower, Iowa figures — and needs — to be more formidable against the outside running game.

Still to be settled

Between the spring game and open practice at Valley Stadium, Iowa’s offensive line rawness was on display in April. Replacing two NFL draft picks at tackle and getting the line to jell is perhaps the biggest challenge for Ferentz and his son, offensive line coach Brian.

If Iowa can’t run the ball or, worse yet, can’t protect Beathard, it could be a disastrous season. The Hawkeyes desperately need to keep Beathard healthy, with backup Tyler Wiegers considered a marked drop-off.

A big spring loss was the knee surgery to tight end Jake Duzey. He was probably going to be the No. 2 receiving option behind wideout Tevaun Smith, but how fast Duzey can recover (Ferentz was hopeful for September) and whether Henry Krieger-Coble, George Kittle and Jon Wisnieski can elevate their play will help the passing game.

Remember, Brian Ferentz this spring said Iowa’s program is healthy when it’s winning close games. The Hawkeyes’ health will be tested in 2015 by a lineup of beatable opponents (Ohio State, Michigan State, Michigan and Penn State don’t appear on the schedule), yet that fortuitous slate also offers more opportunities for unpalatable defeats.

Kirk Ferentz’s 17th team could be favored in as many as 10 out of 12 games (at Wisconsin, at Nebraska the likely exceptions). But, almost every game could fall in that toss-up category, making margins for error razor-thin, coming down to 1-2 plays here or there. Beathard’s importance here cannot be stressed enough.

The fulcrum of the Hawkeyes’ season could be going 2-0 vs. the ISUs — vanquishing dangerous FCS runner-up Illinois State in the home opener, then going to Ames and getting the annual Iowa State monkey off their backs. A 2-0 start means this Iowa team is beating opponents it should beat, and that’ll be a positive indicator that this will become Ferentz’s 13th Iowa bowl team.

Anything less? Fan unrest will swell, more Kinnick Stadium bleachers will go unused and the product will suffer.

AROUND THE BIG TEN: LET’S REVIEW

Iowa was the 14th and final team to be profiled in HawkCentral.com’s team-by-team previews over the past two weeks. Here are the 13 you may have missed: