Make sure to check out DesMoinesRegister.com for all the game coverage, action photos and post-game analysis as the University of Iowa takes on Iowa State at Jack Trice Stadium in Ames. 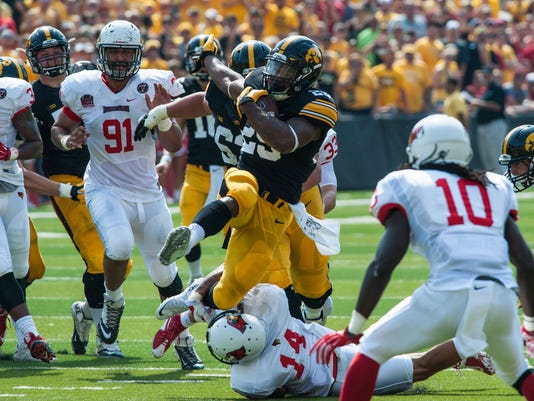 GROUND AND POUND: Iowa State runs a 3-4 defense, but Cyclones coach Paul Rhoads said this week they might deploy some 4-3 against the Hawkeyes. Part of the reason the 3-4 is the right choice for Iowa State is that the Big 12 Conference has become so pass-heavy, there's less emphasis on grinding out victories at the line of scrimmage — something Iowa traditionally wants to do.

Wondering if they'll face a 3-4 or 4-3 adds an extra layer of preparation for the Hawkeyes, as does the fact the Iowa State defense brings lots of new faces after an influx of junior-college recruits. That group collected 13 tackles for loss in a 31-7 season-opening win over Northern Iowa last weekend. One-time juco defensive end Dale Pierson, who will be matched up against left tackle Boone Myers, had three sacks and an interception Saturday.

"It's almost like preparing for a first game … just because those are players that we haven't seen on tape before and we're trying to figure that out," Iowa coach Kirk Ferentz said. "Not only that, but what they're going to do (4-3 or 3-4). So it's really an interesting study."

The best path to success for Iowa would be restoring their "Bullies of the Big Ten" image. Iowa wants to control the line of scrimmage and spring 225-pound junior LeShun Daniels Jr. (who ran for 123 yards on 26 carries in his first career start vs. Illinois State) toward another big day.

"It doesn't matter if they know the play's coming," said No. 2 running back Jordan Canzeri, who had 118 total yards last week. "We're going to run it and make it a successful one."

SELECTIVE HOME-RUN SWINGS: Against Illinois State, none of Iowa's 25 passing attempts were thrown deep. The longest pass play outside of a screen to Canzeri that went for 51 yards was a 20-yard quick-hitter over the middle to Jacob Hillyer. Quarterback C.J. Beathard explained that the running game was so effective on a hot day, "there was really no need to change anything up."

The iPad playbook could be flipped to a few long balls Saturday, perhaps to Tevaun Smith, after the running game sets up play-action. Beathard (6-2, 209) certainly has the arm for it.

"We have a big playbook, but depending on each week, we kind of go into it with a smaller game plan," Beathard said, "because we're just going to execute certain things against certain opponents from what we see on film."

DISRUPTING RICHARDSON, RECEIVERS: Iowa is facing a fifth-year senior quarterback for the second week in a row. This time, it's Sam Richardson, who went 21-for-29 for 233 yards vs. UNI. Richardson burned the Hawkeyes with key conversions a year ago, and he's got a multitude of targets at his disposal in 6-foot-6 D'Vario Montgomery, 6-5 Allen Lazard and 6-2 Quenton Bundrage.

It'll be up to Iowa's secondary and versatile outside linebacker Ben Niemann to knock those big bodies off their pass routes and disrupt timing. Meanwhile, the Hawkeyes' defensive front four needs to get pressure on Richardson without blitz help. The Cyclones are less of a threat at running back and tight end, so Richardson-to-receiver is the key connection to stop. It'll be an 11-man task on every play for Iowa, which has made a concerted effort to limit explosive plays that burned them in 2014.

"It always helps us when the D-line can control the line of scrimmage," cornerback Greg Mabin said. "Just making it hard on the quarterback — he gets frustrated, he gets flustered and makes a bad decision. And it's up to us to take advantage of it."

Iowa State quarterback looks back on the UNI game.

GOOD PUNTS, GOOD COVERAGE: You may have observed last week against Illinois State that Iowa changed its punt formation. Now, three blockers act as a shield for punt-rushers between the center and punter Dillon Kidd.

"We think that our guys can really get out and get down to the ball easier," said Cole Fisher, who is on all four kick coverage/return special teams for Iowa.

What you didn't observe was how effective it was. Both of Kidd's punts last week went for touchbacks. It was a change installed after Ferentz was irked by poor punt coverage that cost Iowa its regular-season-ending game to Nebraska. Iowa ranked 107th nationally a year ago in net punting.

Brown: Iowa's elevator must go up against Iowa State

This week presents a stiff test. Iowa State set a school record for punt-return yardage in a game against Northern Iowa, with Allen Lazard (four attempts, 100 yards) and Trever Ryen (four for 93, including an 81-yard touchdown) combining for 193 yards.

"They take a lot of pride in it, and they've gotten great production and results," Ferentz said of Iowa State. "That doesn't happen by accident, what they did the other night."

The new starting weak-side linebacker led Iowa in tackles in the opener vs. Illinois State.

RIDE THE EMOTION, HOIST A TROPHY: There will be a pregame moment of silence to pay tribute to former Hawkeye safety Tyler Sash, who was found dead in his Oskaloosa home Tuesday. Iowa will wear a gold number "9" decal on one side of its black helmet (the standard tiger-hawk on the other), too. Though none of the current Hawkeyes played with Sash (whose all-Big Ten career spanned 2007-10), there will be emotions flowing through the Hawkeye locker room.

There would be no better way to honor Sash than a victory at Jack Trice Stadium, where Sash in 2009 recorded three interceptions in one game. It would be a satisfying journey across the field to return the Cy-Hawk trophy to the Iowa sidelines — and into the brand new Iowa Football Operations Center after going 0-4 in trophy games last year.

Well after the conclusion of last year's 20-17 Iowa State win, Cyclone players were posing for photos and kissing the trophy on the Kinnick Stadium turf.

"Oh yeah, it sticks with you," Mabin said. "They've had that trophy the whole year, so until we get that back, it's going to stick with me."