Iowa-Pitt under lights is Beathard vs. Narduzzi

C.J. Beathard's mind will be put to the test as much as his arm and legs Saturday at Kinnick Stadium.

Iowa-Pitt under lights is Beathard vs. Narduzzi

University of Iowa is coming off a big win against Iowa State. Now they face Pittsburgh Saturday in a night game at Kinnick. 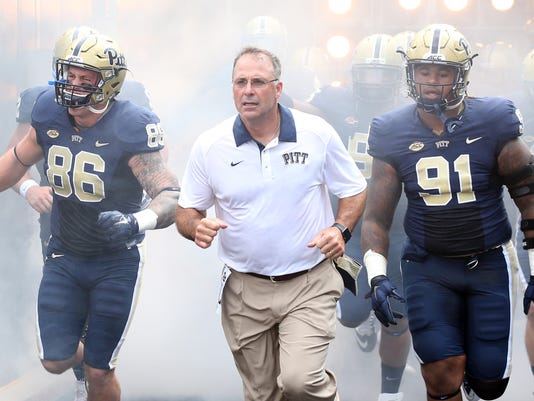 IOWA CITY, Ia. – C.J. Beathard deserves all the praise he’s received this week. Without his versatility, athleticism and arm strength, Iowa isn’t 2-0 and doesn’t load the Cy-Hawk trophy on the bus from Ames.

But to get the Hawkeyes to 3-0 and in the driver’s seat for an undefeated nonconference campaign, the junior quarterback must pass a rigorous, multiple-choices-on-every-play test of football IQ drafted by new Pittsburgh coach Pat Narduzzi.

Beathard has been immersed in film study to prep for Saturday’s first night game at Kinnick Stadium (7:12 p.m., Big Ten Network) since Iowa-Penn State in 2012. Narduzzi, the defensive architect for four Michigan State 11-win seasons in the past five years, likes to blitz and disguise coverages.

Beathard and the Hawkeyes have been cranking up their iPads and looking at video of Narduzzi’s defenses in East Lansing and from the Panthers’ first two games, both wins.

“Whenever I’m at home, right before I go to bed, I’ll watch some film,” Beathard said.

The junior quarterback met the media Tuesday after being named Big Ten offensive player of the week.

The Hawkeyes are expecting an aggressive attack from Pittsburgh, which held Akron to 110 yards in last week’s 24-7 win.

“They’ve shown (blitz) a lot in the first two games,” fifth-year senior center Austin Blythe said. “They like to pressure, and we’ve got to be focused and on top of our assignments to be able to pick that stuff up.”

Let’s get this out there: These aren’t the Pittsburgh Steelers. Atlantic Coast Conference media predicted the Pitt Panthers to finish sixth out of seven teams in the Coastal Division, and that was before all-American running back James Conner was lost for the season with a knee injury.

Iowa’s offense is predicated on being able to run the football; rarely are the Kirk Ferentz Hawkeyes able to win by being one-dimensional. Pitt’s rushing defense has allowed an average of 88 rushing yards against Akron and Bo Pelini-coached Youngstown State.

With Beathard using his legs to help, the Hawkeye piled up 210 rushing yards against Illinois State and 260 against the Cyclones. Going for three 200s in a row would be a big accomplishment, especially with No. 1 running back LeShun Daniels (right ankle) questionable to play at best.

“I’m smiling here, because we enjoyed those two weeks while we had our chance. These guys give up about 88 a game,” Ferentz said. “It may not be 200 this week, but we'll see what happens. They are going to come hard this week.”

“Big guys, especially inside,” Blythe said. We’re going to have to play with good leverage and come off the ball and get after them.”

The offensive line was probably viewed as the Hawkeyes' No. 1 preseason concern, with new tackles Boone Myers and Ike Boettger looking like sophomores in open scrimmages in spring and fall camps. But they got a passing grade in Games 1 and 2. Myers starred in the Illinois State win, and then it was Boettger and right guard Jordan Walsh gashing Iowa State’s defense on the right side.

This will be a new challenge though, with the various blitzes. The Panthers have nine sacks in two games. And that’s where Beathard’s mind comes into play. He can't miss anything, or he'll be hit. That’s why he’s glued to the iPad before hitting the pillow.

“The guys understand it’s not just the line, not just the backs (and) the receivers coming in,” Ferentz said. “It’s our quarterback getting us into the right plays, getting us out of bad plays. It's everybody just being coordinated, and I think right now we have a pretty decent vibe with everybody.” 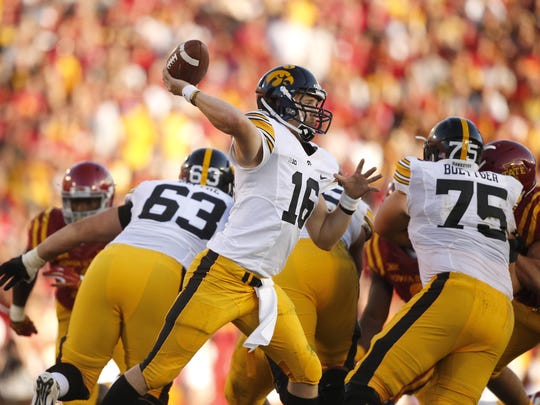 So how does Narduzzi see things? No. 1, he likes Beathard. Really likes him.

“The most impressive thing about him is he’s not giving up sacks,” Narduzzi said. “He’s not throwing interceptions.”

Beathard (30 of 49, 426 yards, four TDs, no picks) is given a lot of responsibility to read defenses and react on the fly. A great example came against Iowa State on third-and-21 from Iowa’s own 6. Offensive coordinator Greg Davis sent in the option to go deep, or play it safe. It was Beathard’s call.

Iowa State rushed only three, and Beathard was able to set his feet and scan the field from his own end zone. He zipped a long ball to Matt VandeBerg for maybe the game’s most important play for 48 yards.

Earlier in the game, Beathard hurt the Cyclones by uncorking runs of 44 and 57 yards.  No wonder he was Big Ten co-offensive player of the week and the Manning Award winner (a national fan vote for the week’s top quarterback).

“I think you can get hurt either way, whether you play base — obviously (Iowa State) lined up and ran a three-man rush against him, and he sat back there all day and picked people apart,” Narduzzi said, “or you can bring five or six guys, (and) he can make you miss.”

Narduzzi is “preparing for the big back” — 225-pound Daniels, whom he remembers Michigan State recruiting out of Warren, Ohio. If Daniels can’t go, it’ll mean Jordan Canzeri’s fourth career start, and we might see sophomore Derrick Mitchell Jr. for the first time, too. Ferentz said on his Wednesday radio show he wouldn’t hesitate to play Mitchell, despite a brief suspension over a code-of-conduct issue last week.

But back to Beathard. A lot of Iowa fans are wondering why he wasn’t the quarterback last year over Jake Rudock. The thing that held him back wasn’t talent, it was his ability to understand everything the QB has to do – from line calls to decision-making. Beathard got there during bowl preparation, and here he is – ready for whatever Pitt throws at him.

“I’ve got to put in a lot of time. Quarterback is a position you have to be in here. … I’ve got to watch a lot (of film) on my own every day,” Beathard said. “It is a quick turnaround. Our eyes are on Pitt. You want to know them inside and out by the time you get out there and play.”

The spread: Iowa is favored by 5.5