The junior who is 8-0 in his career as a Hawkeye starter provided an update on his injured right groin Tuesday. 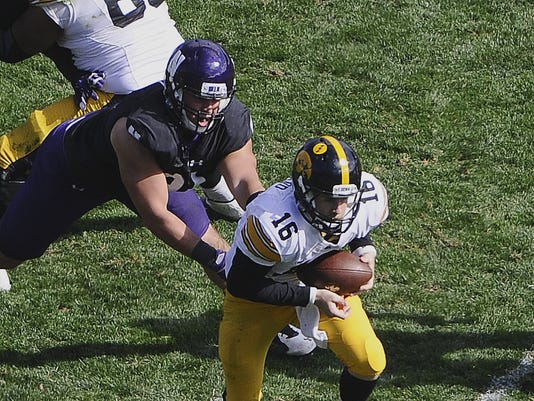 But, he’s making progress. Beathard said after a bye week filled with treatments, he’s been practicing in advance of Saturday’s 2:30 p.m. home game against Maryland.

“It’s not 100 percent yet,” Beathard said Tuesday. “But it’s continued to get better.”

Beathard led now-No. 10 Iowa to a 40-10 win at Northwestern on Oct. 17 despite an injury to his right groin that limited his mobility. On his last snap in that win, early in the fourth quarter, Beathard was knocked to the ground by Northwestern safety Godwin Igwebuike and was very slow to get up and return to the Iowa sideline.

“I think I’m a lot healthier. It was hurting after the Northwestern game,” Beathard said. “Luckily, we were up where I didn’t have to finish the game. The bye week was nice to get some rehab, get treatment all that stuff. It was nice to get off your feet and kind of rest it. By Saturday, it should be pretty good.”

Beathard is 8-0 as Iowa's starting quarterback, including 7-0 this year thanks in large part to his mobility. That elusiveness was limited at Northwestern, and during the Hawkeyes' lone bye of the regular season he spent a lot of time in the Iowa Football Performance Center's athletic training room.

“I was in here at least twice a day doing everything you can think of," Beathard said, "trying to get my leg back to working as good as it can possibly work.”

That's the key part of that answer: As good as possible is the goal. Beathard seemed to hedge on how effective he could be against the Terrapins, who are allowing 36.0 points and 413.3 yards per game. Improvement has been incremental. He realizes he might re-aggravate the injury, but he's not going to shy away from situational running.

The good news is that he's taking more reps this week than in the previous two weeks – leading up to the Northwestern game, then the bye. Beathard has said he doesn't need as many physical reps to prepare, that playing quarterback is as much about studying film and opponent tendencies.

"We gave him a majority of last week off, which was good for him, and a couple of other guys in that same category," head coach Kirk Ferentz said. "He's been working and he's throwing the ball well."