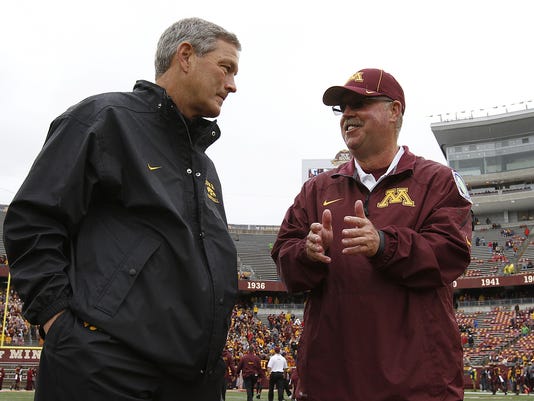 As the sad news broke Wednesday morning that Jerry Kill was retiring for health reasons, the Big Ten Conference's West Division football landscape was shaken up even more.

Through tears, Minnesota’s fifth-year coach ceded a profession he loves, effective immediately, to longtime assistant coach Tracy Claeys — who on Nov. 14 will become the third interim coach that 10th-ranked Iowa faces in a span of five games.

That startling stat underscores the stability and importance of what’s happening this season in Iowa City.

In the Big Ten West alone, Illinois and Minnesota are already seeking permanent coaches for 2016. (Minnesota needs an athletic director, too.) Purdue, with third-year coach Darrell Hazell now 1-18 in conference play, might be looking soon, too.

Of course, there’s the unrest in Lincoln with Nebraska first-year coach Mike Riley, off to an inglorious 3-5 start. The last time Nebraska lost five times in a season was 2007, Bill Callahan’s final year there.

Brown: As Iowa's coaching staff jells, an undefeated season is the reward

And even though Wisconsin seems to be doing OK under first-year coach and Barry Alvarez disciple Paul Chryst, the Badgers are on their third coach in four years.

That leaves Iowa (Kirk Ferentz, 17th year) and Northwestern (Pat Fitzgerald, 10th year) as the only West schools with programs on proven footing. Given the neighboring states’ uncertainty, the decision by athletic director Gary Barta to give Ferentz a vote of confidence following a disappointing 7-6 season in 2014 looks that much better.

A 7-0 record, the new $55 million Iowa Football Performance Center and the perception of New Kirk/Ferentz 3.0 have converged in 2015 to embolden the Hawkeye brand: a program that develops players and contends for championships.

The contrast between Iowa and many of its Big Ten counterparts will be tough to miss in the coming weeks, including Saturday when Maryland comes to town. Maryland has great inherent advantages — a major East Coast market and tens of millions in funding from Under Armour founder and ex-Terrapin Kevin Plank — but the football program lacks an identity. The Terps on Saturday (2:30 p.m., ABC/ESPN) will be guided by interim coach Mike Locksley, his second game at the helm after the in-season firing of Randy Edsall.

In two weeks, Minnesota comes to Iowa City without a permanent coach or athletic director. Minnesota didn’t win a Big Ten title under Kill, and it wasn’t going to this year either. But he certainly elevated the Golden Gophers’ program and leveled the playing field with Iowa and then some, achieving back-to-back eight-win seasons in Minneapolis — not to mention a 51-14 dismantling of the Hawkeyes last year.

How Hawkeyes deal with prosperity will define them

The circumstances surrounding Kill’s departure are heartbreaking. The man loves coaching, and is good at coaching. He seems to be an even better man.

"I have tremendous respect for the coaching job he has done at Minnesota," Ferentz said in a statement Wednesday, "and even more so for the manner in which he has done it."

But two seizures before Tuesday’s practice told Kill he needed to leave before things got worse. “I don't want somebody to worry if I'm going to drop on the field,” he said.

Minnesota will be hard-pressed to find a worthy successor to Kill, who assembled a 29-29 record. His predecessor, Tim Brewster, went 17-33.

Nationally, there are already eight known coaching vacancies — including one at North Texas, another Iowa victim this year, which jettisoned Dan McCarney in-season. There surely will be several more openings come December.

Making a good hire is tough in college football, something Illinois, Maryland and Minnesota will try to do in the coming months. The same challenge could be ahead for annual Iowa opponents Purdue and Iowa State, too. Who knows what the future holds at Nebraska?

Iowa doesn’t have those worries.

Under Ferentz, Hawkeye football has carried a what-you-see-is-what-you-get identity. That has drawn a fair share of praise (fundamentally sound) and criticism (too vanilla) in 16-plus years.

Right now, that identity is emerging as an advantage and something to embrace.