One the eve of the Big Ten Conference championship game, the Iowa quarterback's toughness was discussed. 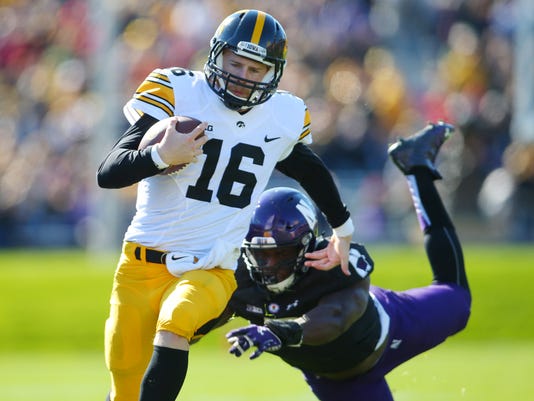 INDIANAPOLIS — C.J. Beathard’s health has been a hot-button topic all season. On the eve of the Big Ten Conference championship game, Beathard’s toughness was at the front of the discussion.

“The first thing I would say about C.J. is his degree of mental toughness and physical toughness,” Ferentz said. “I don’t know if I’ve been around a guy that can surpass it. He’s an amazing young guy. Soft-spoken, very humble. Just an unbelievable young man.”

Ferentz was asked how close he came Oct. 17 to using a different quarterback at Northwestern. Beathard was struggling to move with a painful groin injury, but he managed to throw for 176 yards in a 40-10 win in Evanston, Ill.  A bye week followed, and Ferentz was not optimistic Beathard’s health would improve much the rest of the season.

“We thought he’d be a little bit better moving forward,” Ferentz said. “But realistically — and I’m always looking at the bad side as a coach, the pessimistic side — I envisioned us maybe having him in the shotgun the entire month of November. Kind of like that one game, (Byron) Leftwich back at Marshall that one time.

“For whatever reason, he has gotten better. I’m not saying he’s 100 percent healthy right now, but he’s a lot healthier than he was in Chicago.”

Hawk Central presents the Iowa Nice Guy, Scott Siepker, on bias against Iowa Hawkeyes in college football playoffs ahead of the Big Ten Championship match up with Michigan State.

On that topic of toughness, Ferentz spoke of senior defensive end Nate Meier, who hurt his left arm against Maryland and then left last Friday’s win at Nebraska with a “soft-tissue” leg injury.

Meier practiced Friday for the first time this week.

“He’s going to play,” Ferentz said. “We’ll see how effective he is, how long he goes, but he’ll play.”

If Meier is limited, expect redshirt freshman Matt Nelson to get more time, as he did in the fourth quarter of last week’s game at Nebraska.

The news sounded a little better for outside linebacker Ben Niemann, who went through concussion testing after the Nebraska win. Niemann has been practicing since mid-week and will be cleared to start Saturday.

In his ninth year at Michigan State, Mark Dantonio is the third longest-tenured Big Ten coach. Friday, he got his first public opportunity to weigh in on “New Kirk” — who on Tuesday was named the league’s coach of the year for a fourth time in 17 years at Iowa.

“As far as the ‘New Kirk,’ hey, they're winning football games,” Dantonio said. “Looks to me they're doing it the same way they've always done it.

“Conceptually, there's little nuances I think there, but I think what you see is an Iowa program that knows how to win. If they haven't won to this level the last couple years, they found how to win. I believe it's always about relationships. I'm sure he has strong relationships with his players.”

Ferentz shared Friday that it was a recommendation from Detroit Lions coach Jim Caldwell, a former Iowa assistant and former head coach of the Indianapolis Colts, which led to the hiring of Greg Davis as offensive coordinator prior to the 2012 season.

“I remember being in the Philly airport coming back from (a New Jersey) clinic,” Ferentz recalled. “I called Jim Caldwell to ask him if he knew of any young guys coming up in the NFL — maybe the next Bill O'Brien, quite frankly, is what I was trying to find. He mentioned a couple guys in the NFL, but he also said would you consider Greg Davis? I was really taken aback.”

Davis, now in his fourth year at Iowa after replacing Ken O’Keefe, has had his best statistical year running the Hawkeye offense: 33.7 points and 404.2 yards per game. Ferentz compared his knowledge of the game to the late Norm Parker, Iowa's longtime defensive coordinator.

"Different in personalities, but I'll tell you, they are encyclopedias of football," Ferentz said, "and most importantly, they're really good people."

Ferentz got a lot of preparation questions Friday about a team the Hawkeyes haven’t faced since 2013.

On whether he contacted Oregon — which has former Hawkeye assistant Ron Aiken and former player Erik Chinander on staff — for intelligence on Michigan State (those teams have faced each other the last two years): “Somebody on our staff may have. If they did, it didn't come up in a staff meeting. They may have. Guys communicate all the time.”

On declining a Lucas Oil Stadium walk-through Friday afternoon (Michigan State did one): “That's just not what we do. We haven't done that for a long time (in opposing stadiums). … We wanted to stay with our routines, do what we do, do what we've been successful with this year.”

The Big Ten football championship will be decided in Indianapolis as Iowa takes on Michigan State.