A look back to Iowa's Rose Bowl history

A look back to Iowa's Rose Bowl history

University of Iowa students cheer as they arrive in Los Angeles for the 1957 Rose Bowl game against Oregon State. Register file photo
Fullscreen 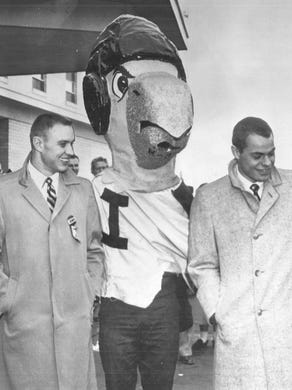 Hawkeye co-captains Don Suchy, left, and Dick Deasy get off the bus and greet Herky after arriving in California for the 1957 Rose Bowl game. Register file photo
Fullscreen

The University of Iowa marching band gets ready for the Rose Bowl parade on Dec. 31, 1956. Register file photo
Fullscreen 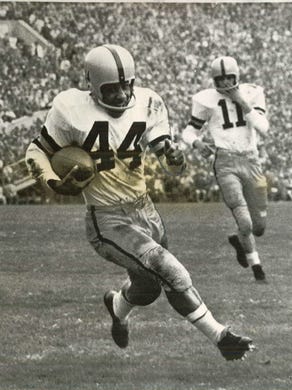 Katy Butler greets her friends Marcia McGovern, left, and Jean Niemier at Union station in Los Angeles on Dec. 30, 1956. The three girls rode on the University of Iowa float in the Tournament of Roses Parade in Pasadena, Calif. Register file photo
Fullscreen 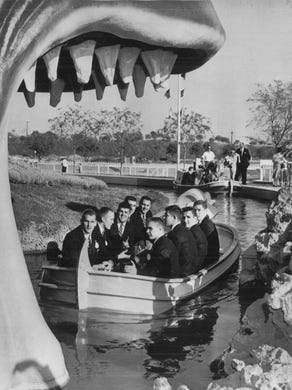 A boatload of Iowa football players cruise into a whale's mouth at Disneyland on Dec. 20, 1956. Register file photo
Fullscreen 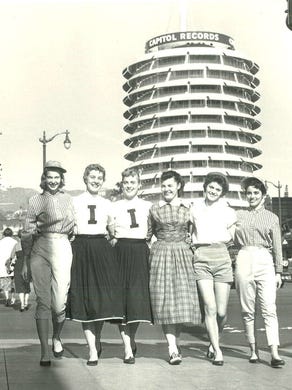 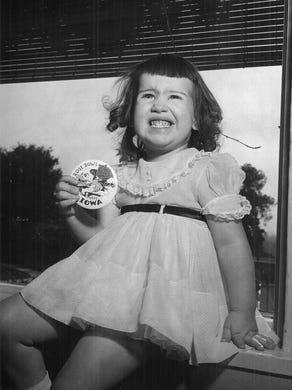 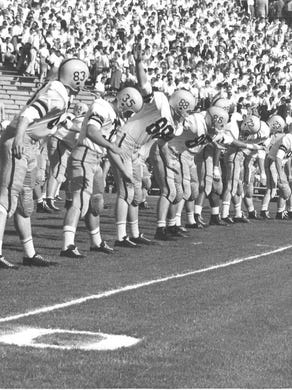 Iowa football players stretch before the start of the Rose Bowl game against California on Jan. 3, 1959. Register file photo
Fullscreen

The University of Iowa float moves along the route of the Tournament of Roses Parade on Jan. 1, 1959. Register file photo
Fullscreen

University of Iowa students Terri Svoboda, Margaret Weston and Carol Ryan perch on top of the car they drove from Des Moines to California for the 1959 Rose Bowl game. Register file photo
Fullscreen 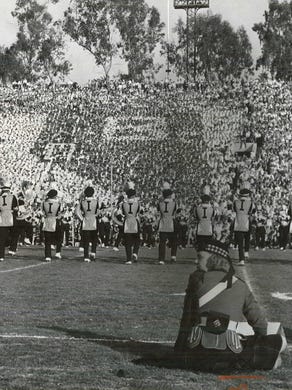 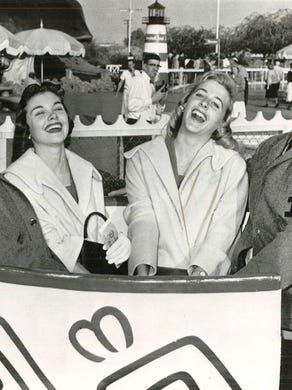 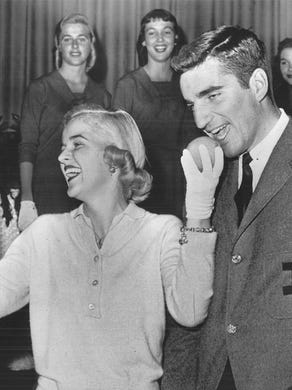 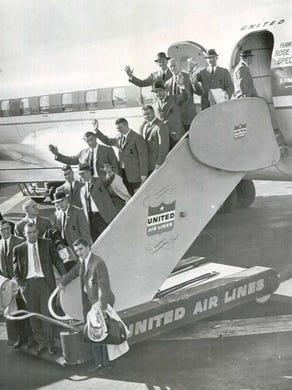 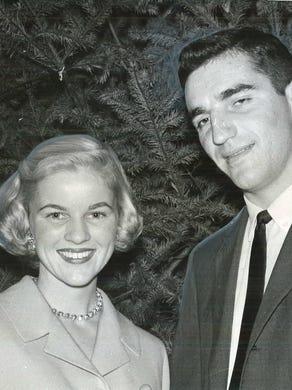 Iowa's Brett Miller receives a rose and an orange from members of the Rose Bowl queen court upon arrival at the airport for the 1982 Rose Bowl game. Register file photo
Fullscreen

Iowa's Andre Tippett is pleased with the turnout at a pep rally at Citrus College for the 1982 Rose Bowl game. Register file photo
Fullscreen

Members of the Iowa football team clown around with Disney characters before spending the day at Disneyland during the 1982 Rose Bowl trip. Register file photo
Fullscreen 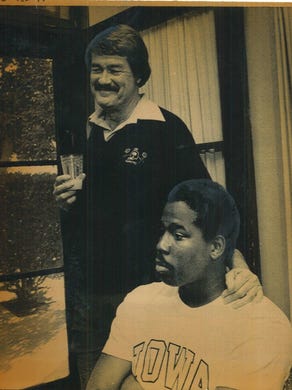 A smiling Hayden Fry and serious Reggie Roby stand together at a press conference in Pasadena, Calif. on Dec. 25, 1981. Register file photo
Fullscreen

The University of Iowa marching band practices on the UCLA campus during the 1982 Rose Bowl trip. Register file photo
Fullscreen 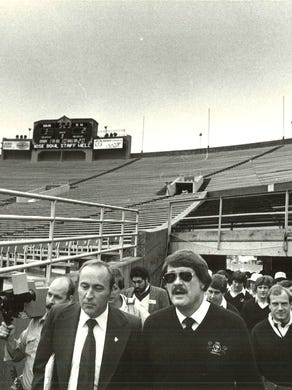 Herky the Hawk, backed by the University of Iowa marching band, leads a crowd in a cheer during the Iowa Bash before the 1986 Rose Bowl game. Register file photo
Fullscreen

From left, Flossie Droll, Erma Alberhasky and Flossie's daughter Lori Hamilton kick up their heels while waiting for the Hawkeye marching band to arrive at a pep rally for the 1986 Rose Bowl. Register file photo
Fullscreen

UCLA players and coaches pose for a group photo at the 1986 Rose Bowl while John Lee gets ready to take a photo of his own during the 1986 Rose Bowl. At right is UCLA head coach Terry Donahue and at left is offensive coordinator Homer Smith. Register file photo
Fullscreen 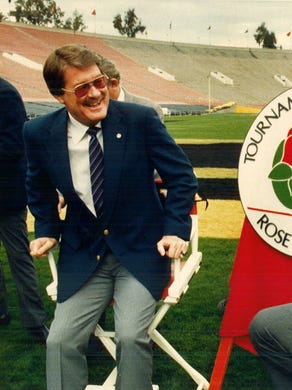 Iowa's Leroy Smith talks to a recruit from his hometown after practice for the 1991 Rose Bowl game. Register file photo
Fullscreen

Iowa running back Tony Stewart spins after catching a pass for more than 30 yards during the 1991 Rose Bowl game against the Washington Huskies. Register file photo
Fullscreen 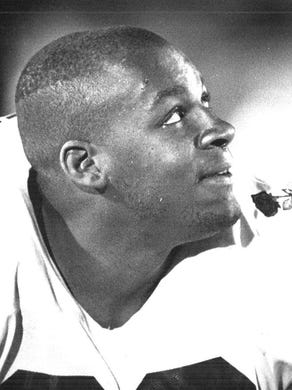 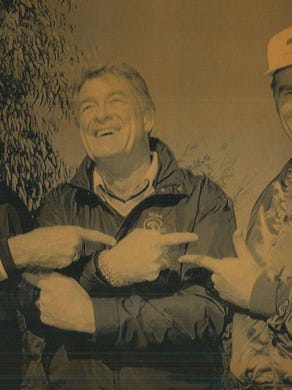 University of Iowa coach Hayden Fry, center, is joined by Craig T. Nelson, right, who portrays Fry in the television series "Coach," on Dec. 20, 1990. At left is Long Beach State coach George Allen. The trio got together at Long Beach State where Allen presented the Hawkeyes with a celebratory cake. Register file photo
Fullscreen 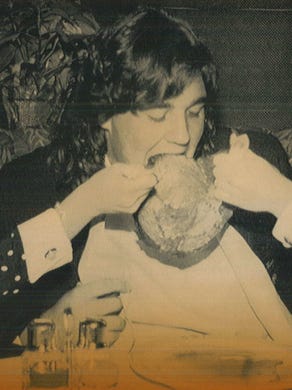 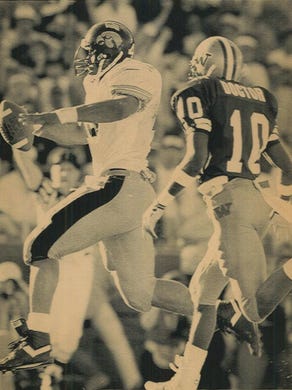 Coach Hayden Fry holds an Iowa helmet with an American flag decal that the team will wear in the 1991 Rose Bowl to show support for the military. Fry was showing the helmet at a news conference in Newport Beach, Calif. Register file photo
Fullscreen

Background: The Hawkeyes rocketed up the national rankings to No. 3 after capping an 8-1 regular season with a 48-8 throttling of Notre Dame. Iowa claimed its second victory of the season by downing Oregon State 14-13 in Iowa City and the two teams earned a rematch after claiming conference championships. Oddsmakers favored the Hawkeyes to win by at least a touchdown.

What happened: The Hawkeyes raced out to a 14-0 lead behind quarterback Kenny Ploen. The Rose Bowl MVP ran for a 49-yard touchdown to open the scoring and connected on 9-of-10 passing. Rambunctious Iowa fans ripped down the goal posts at one end of the Rose Bowl with four seconds still left on the clock.

Newspaper clipping: “Officers tried vainly to restrain the onrushing herd of Iowa fans as game time ran out. They didn’t come close to succeeding. The goal posts at the north end came down almost n came simultaneously as the end of the game. The fans quickly shattered the wood and seized fragments as souvenirs.” – George Mills

Newspaper clipping: The Hawkeyes were national championship contenders and ranked second in the country until they fell at home against Ohio State in the second-to-last game of the regular season. They bounced back a week later by beating Notre Dame. California dropped its first two games of the year before closing out the regular season with seven wins in its last eight games.

What happened: The Hawkeyes smashed four Rose Bowl offensive records, including 429 yards rushing. Iowa led 20-0 at halftime and piled on in the third quarter when Willie Fleming and Bob Jeter broke loose for touchdown runs of 37 and 81 yards, respectively.

Newspaper clipping: “They put Bob Jeter in the role of a warhead on a high-explosive menace and Jeter responded brilliantly by smashing two all-time records on his own and earning the unanimous vote of the Helms Foundation committee as the outstanding player.” – Bert McGrane. Hawkeyes in the Rose Bowl: Then and Now 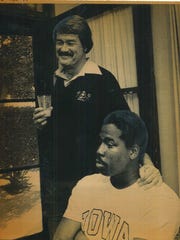 A smiling Hayden Fry and serious Reggie Roby stand together at a press conference in Pasadena, Calif. on Dec. 25, 1981. (Photo: Register file photo)

Background: Third-year Iowa coach Hayden Fry helped the Hawkeyes snap their string of 19 consecutive seasons without a winning record in stunning fashion. Iowa stunned No. 7 Nebraska in the season opener and No. 6 UCLA two weeks later and knocked off four more ranked Big Ten opponents on the way to Pasadena. Washington claimed Pac-10 invitation to the Rose Bowl after half the teams in the league finished with two losses.

What happened: The Hawkeyes turned the ball over five times and never recovered after failing to convert on a fourth-down try late in the second quarter and watching the Huskies capitalize with a touchdown in the closing seconds of the half.

Newspaper clipping: “The network announcers couldn’t have said it better, and they’re paid enormous sums to draw conclusions and form insights. Iowa just had been kicked in the pants, 28-0, Friday in the 68 th Rose Bowl, but Hayden Fry split the uprights from 50 yards out with his assessment of Washington’s victory. ‘Ladies and gentlemen,’ he said, ‘you’ve just witnessed an old-fashioned rump-kicking. Washington just put it to us in every phase of the game starting with the coaching on down.’” – Marc Hansen. 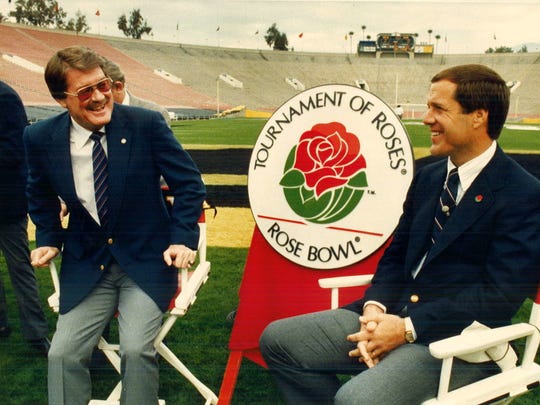 Background: Behind Heisman Trophy runner-up Chuck Long at quarterback, the Hawkeyes held the No. 1 spot in the national rankings for five weeks as they started 7-0 before a road loss to Ohio State. Iowa recovered the following week by obliterating sixth-ranked Illinois 59-0 and the No. 4 Hawkeyes arrived in Pasadena with an outside shot at a national championship. A tie against Tennessee and narrow losses to Washington and USC – all on the road – kept UCLA out of title contention.

What happened: Ronnie Harmon, Iowa’s dynamic tailback, lost four fumbles in the first half after losing just one the entire regular season. His first came on Iowa’s first offensive snap after the Hawkeyes took over at the UCLA 6. Combine the turnovers with coach Hayden Fry’s estimate of 20 to 30 missed tackles and Iowa had big problems. Freshman Eric Ball ran for 227 yards and four touchdowns for the Bruins. One silver lining for the Hawkeyes: Chuck Long threw a late touchdown pass to Bill Happel, making Happel and his father, Bill, the first father-son combo to score touchdowns in the Rose Bowl.

Newspaper clipping: “Everything couldn’t have gone better, Fry said, two days before the game. Workouts were crisp, accommodations were swell. The team was sound of mind and spirit. He had planned for every contingency. No detail was too small to be neglected. This time the Hawkeyes would be ready. Then Wednesday came, and Iowa went the way of all Big Ten Rose Bowl representatives. The Hawkeyes weren’t ready. They weren’t ready, 45-28.” – Marc Hansen

Background: The Hawkeyes opened the Big Ten season 5-0, winning on the road at No. 10 Michigan and walloping No. 5 Illinois 54-28. Iowa stumbled down the stretch, losing to Ohio State and Minnesota in the last three weeks to finish in a four-way tie for the league lead at 6-2 with Michigan, Michigan State and Illinois, all teams Iowa defeated. Washington lost two games by a combined nine points and annihilated three ranked opponents – USC, Oregon and Arizona – by a collective 96 points.

What happened: The Huskies buried the Hawkeyes early, bolting out to a 33-7 halftime lead and a 39-14 advantage at the end of the third quarter before Iowa rallied with three fourth-quarter touchdowns. The Hawkeyes racked up 454 yards offense, but they fumbled four times, threw four interceptions and Washington returned a blocked punt for a touchdown. With the nation’s top run defense, Washington held Iowa’s tailback tandem of Nick Bell and Tony Stewart combined for 85 yards rushing, a shade more than half of their combined season average.

Newspaper clipping: “For the longest time, it looked like the Rose Bomb III, the horrifying sequel to the horrifying sequel. It curled your hair. It gave you nightmares. It sent you screaming into the night. It made you want to cover your Iowa license plates. At halftime, it was Washington 33, Iowa 7. At the end of the third quarter, it was 39-14. Hayden Fry’s worst nightmare had come to life before a nation of bowl watchers. Then, miracle of miracles, the team that lost to Minnesota suddenly turned into the team that pounded Illinois.” – Marc Hansen