Leistikow: New appreciation for 'Win, Graduate, Do It Right'

Leistikow: New appreciation for 'Win, Graduate, Do It Right'

“Win, Graduate, Do It Right” didn't seem as hokey on Friday morning as it did last summer.

That’s the mantra now famously coming from the top of the University of Iowa athletics department. Gary Barta has compared the approach to a “three-legged milking stool,” and it is displayed in his Carver-Hawkeye Arena office as a daily reminder.

When Hawkeye fans were asked to complete a Black and Gold survey last summer and rank what was most important to them – winning on the field vs. student-athletes graduating vs. administrators playing by the rules – it was widely mocked.

Given the timing, after a disappointing 7-6 football season, the survey came across a little bit sanctimonious. It felt like, “Hey, even though we didn't beat any of our rivals, keep buying season tickets because we don't break the rules." (Insert thumbs-up emoji.)

When challenged on the substance and timing of the “Win, Graduate, Do It Right” survey, Barta said this in July:

"It's not just about winning, even though the most attention that's paid on a daily basis to how we're doing or how a coach is doing, is winning. I accept that. I understand that. And I believe in that. But I also quietly, or boldly I guess in some cases, say, I want a 10 in academics and I want a 10 in doing things the right way. … So it's just a constant reminder to our staff, and to our fans, that we believe it's 10-10-10, and the stool is going to tip over if you don't pay equal attention.”

After Thursday’s incredible circumstances surrounding Mississippi offensive lineman Laremy Tunsil at the NFL Draft and Friday's news that an Alabama assistant coach was resigning over recruiting violations, “Do It Right” carries a little more heft.

Tunsil confessed to media after his tumble down the draft board that he had been given money by a coach while at Ole Miss. Two leaked text-message threads appeared to show Tunsil asking Ole Miss assistant athletics director John Miller for money to pay rent and his mother’s electric bill. Tunsil, who served a seven-game suspension last season for accepting improper benefits (the use of three loaner cars), admitted that the text messages were real and that his social-media accounts were hacked.

Even though he’s beaten Alabama each of the past two years, I wouldn’t want to be Ole Miss coach Hugh Freeze going forward.

A man's integrity spans beyond his professional success. And while Iowa’s Kirk Ferentz isn’t perfect – no one is – the nation’s second-longest-tenured coach (by a few days to Oklahoma’s Bob Stoops) has a clean reputation in his 18 years here.

The 2011 rhabdomyolysis episode, in which 13 players were hospitalized following a week of grueling workouts, is probably the darkest stain on Ferentz’s watch. An investigation cleared Iowa’s trainers and coaches of wrongdoing in the rhabdo case. Changes were implemented to ensure it didn’t, or couldn’t, happen again.

Better to be accused of trying to gain an advantage through hard work than by cheating through illegal payment to players. 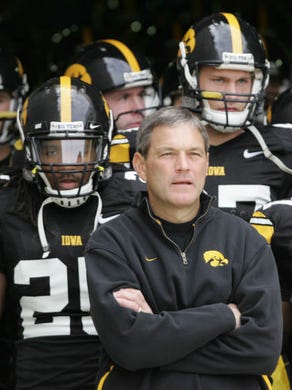 Iowa head coach Kirk Ferentz applauds with former Iowa coach Hayden Fry prior to kickoff between the Hawkeyes and Northern Iowa in 2009 in Iowa City. Fry was an honorary team captain for the season opener. Register file photo
Fullscreen 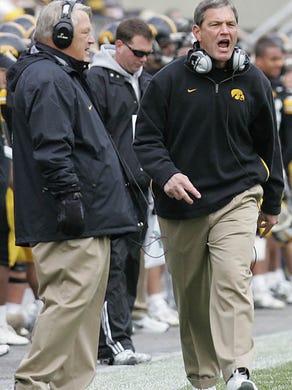 Iowa's Kirk Ferentz yells at a referee after a touchdown was called back due to an ineligible receiver in the 2nd quarter, of the Alamo Bowl Saturday December 30, 2006 in San Antonio, Texas. Matthew Holst/Iowa City Press-Citizen
Fullscreen

Iowa head coach Kirk Ferentz encourages his team from the sideline during a goalline stand in the second overtime on Sept. 9, 2006, in Syracuse, New York. Matthew Holst/Iowa City Press-Citizen
Fullscreen

Iowa head coach Kirk Ferentz talks with a referee while a call was under review during the 1st half, Saturday September 1, 2007, at Soldier Field, in Chicago. Matthew Holst/Iowa City Press-Citizen
Fullscreen

PC photo by Dan Williamson. 9-22-07. Iowa coach Kirk Ferentz, left, argues with an official after a controversial ruling during the second quarter of their game on Saturday, Sept. 22, 2007, in Madison, Wisc. Dan Williamson/Iowa City Press-Citizen
Fullscreen

Iowa coach Kirk Ferentz, left, argues with an official after a controversial ruling during the second quarter of their game on Saturday, Sept. 22, 2007, in Madison, Wis. Dan Williamson/Iowa City Press-Citizen
Fullscreen

Iowa head football coach Kirk Ferentz, left, stands with the team as they wait to run onto the field at Camp Randall Stadium for their game against Wisconsin on Saturday, Sept. 22, 2007, in Madison, Wis. Wisconsin won the game, 17-13. Dan Williamson/Iowa City Press-Citizen
Fullscreen

Iowa head coach Kirk Ferentz talks with an official during the second quarter of the game against Purdue at Ross-Ade Stadium in West Lafayette, Ind., on Oct. 20, 2007. Hannah van Zutphen-Kann/Iowa City Press-Citizen
Fullscreen

Iowa head football coach Kirk Ferentz reacts after the Hawkeyes were called for pass interference during the third quarter of their game against Northwestern on Saturday, Nov. 3, 2007, at Ryan Field in Evanston, Ill. Iowa won the game 28-17. Dan Williamson/Iowa City Press-Citizen
Fullscreen 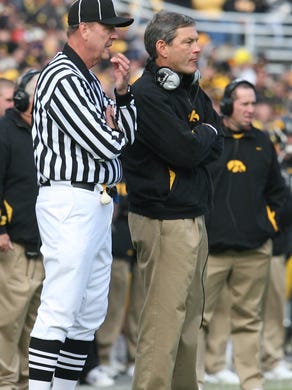 Kirk Ferentz stands in the tunnel with his team before taking the field against Pittsburgh, Saturday Sept. 20, 2008, at Heinz Field, in Pittsburgh, Pa. Matthew Holst/Iowa City Press-Citizen
Fullscreen

Iowa coaches Kirk Ferentz, left, and Erik Campbell yell instructions to the team during at time out in the third quarter of their game against Michigan State on Saturday, Oct. 5, 2008, at Spartan Stadium in East Lansing, Mich. Michigan State won the game 16-13. Dan Williamson/Iowa City Press-Citizen
Fullscreen 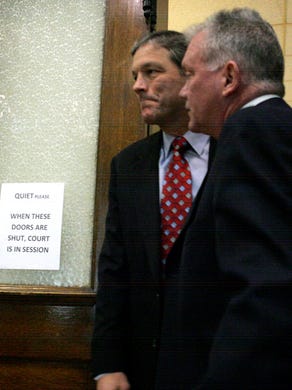 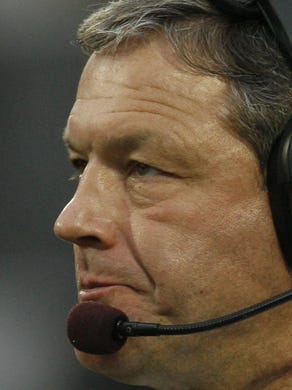 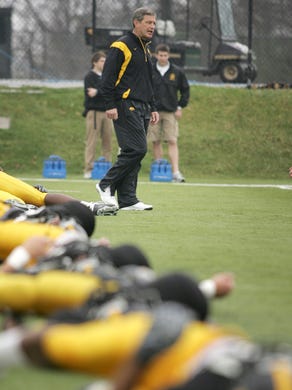 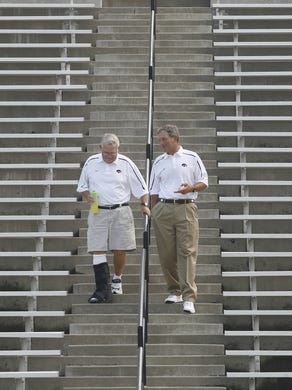 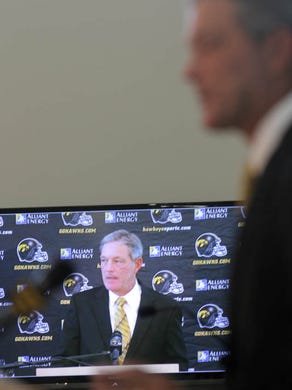 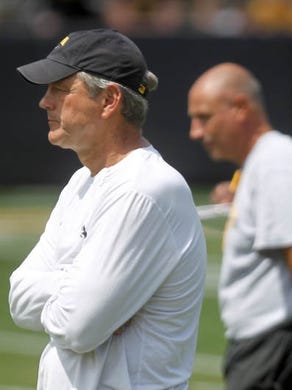 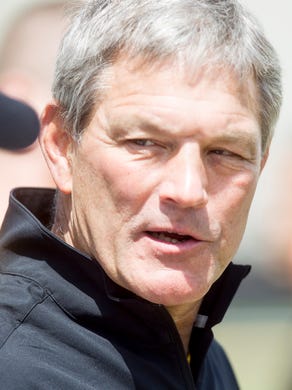 I can’t say with 100 percent certainty that all 24 athletic programs at Iowa are clean, even though open-records requests for years have revealed only very minor NCAA violations in the department. And I’m not turning a blind eye to the ongoing, serious federal investigation over whether Barta exhibited gender bias in circumstances surrounding the 2014 firing of field hockey coach Tracey Griesbaum.

But when it comes to Iowa football, I am confident in saying they do things right. On top of that, the recently released NCAA Academic Progress Rate for 2014-15 showed that football was one of five UI sports programs to post all-time high scores.

All that said, when my fingers are typing 12 to 15 postgame football columns this fall and winter, I won’t be opining about C.J. Beathard’s GPA or Ferentz’s ability to keep accurate phone records.

The "Win" factor is what we care about most in college sports.

But today reminds us that Graduate and Do It Right matter, too.