The quarterback of the best Iowa team ever and a No. 1 NFL draft pick, Duncan instead became a successful lawyer

Randy Duncan highlights from the 1950s 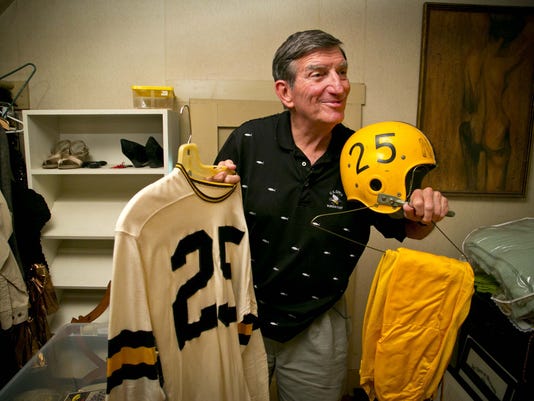 Randy Duncan, the quarterback of the greatest Iowa football team ever who walked away from the sport to build a successful Des Moines law firm, died Tuesday after a long battle with brain cancer. He was 79 years old.

His death was confirmed by the Duncan, Green, Brown and Langeness law firm. Funeral arrangements are pending.

Duncan is survived by his wife, Paula, and sons Scott and Jed. He was preceded in death by his son, Matt.

"The word ‘legend’ is so often overused in sports, but in the case of Randy Duncan, it fits perfectly,” Iowa coach Kirk Ferentz said. “He was one of the true Hawkeye legends, who served as an outstanding representative of Iowa football and the University of Iowa.  A great family man, Randy was humble and caring, and lived life to the fullest. He was passionate and dedicated to his work and a great friend of Iowa football. Randy was a true hero to those who knew him due to his selflessness and dedication to his family and profession."

Duncan led the Hawkeyes to the 1959 Rose Bowl, finished second in the Heisman Trophy voting (to Army’s Pete Dawkins) and was the No. 1 overall pick in that year’s NFL Draft. But the son of a lawyer was never fixated on achieving fame through football. Selected by the Green Bay Packers, he chose instead to play in the Canadian Football League, an unfathomable thought in the modern era.

Duncan was born in Osage on March 15, 1937, and moved with his family to Mason City at age 4 and to Des Moines five years later. There, he became a prep sports legend, starring in basketball and football at Roosevelt High School. The college recruiters took notice and Duncan was set to head to Colorado when he met Bump Elliott, then an assistant coach for the Iowa football team. Elliott was a charming salesman; Duncan became a Hawkeye.

“He made it on just hard work and determination. He had a desire to be a good player,” Elliott said. “He always was ready and knew what he was doing.  I had great respect for him.”

In Iowa City, wearing the No. 25 he would make famous, Duncan tried his hand at both quarterback and safety, in an era when the best athletes played both ways. It wasn’t always a smooth adjustment.

“I broke my nose eight times at Iowa, once in a touch football game,” Duncan recalled. “It was almost always making a tackle. They didn’t always have face masks … and then only a single bar … until my junior year.”

He wasn’t anointed the starting quarterback, either. Duncan had to sit behind Ken Ploen as a sophomore, but twice took advantage of opportunities to beat Oregon State when the starter went out with an injury. The second of those was in the 1957 Rose Bowl, when Duncan led the Hawkeyes to a second-quarter touchdown en route to a 35-19 victory.

Duncan had been battling Oklahoma native Olen Treadway just to be Ploen’s backup. It wasn’t until Treadway injured his knee that Duncan won that competition. 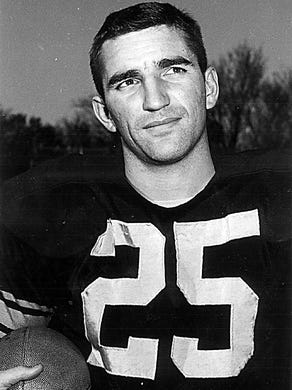 Randy Duncan holding a famous photo of him kissing Jayne Mansfield before the 1957 Rose Bowl game against Oregon State. Duncan said he had wanted her for his Christmas gift. Rodney White/The Register
Fullscreen 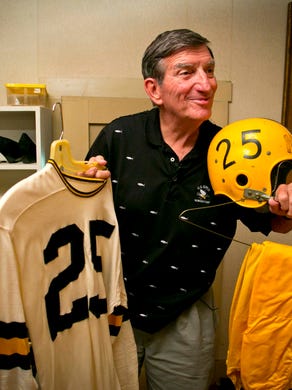 Randy Duncan in his attic holding a photo from an Iowa football game against Air Force. Rodney White/The Register
Fullscreen 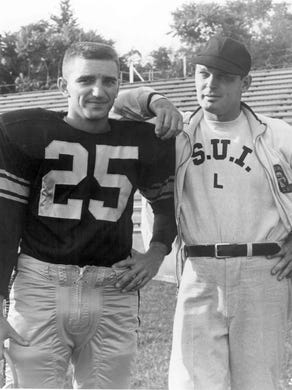 “I was lucky all the way through high school and college,” Duncan later asserted. “Being in the right place at the right time probably was more important than my ability.”

“He can say that. The results kind of speak for themselves,” Treadway said. “Randy had a lot of strength and he could throw the long ball. I didn’t have the speed. Randy wasn’t a burner. But he was certainly faster than I was, and stronger, and bigger.”

Duncan was just 6-foot, 180 pounds, unimpressive by today’s standards but plenty big enough in his era.

“None of us had ever seen a weight room,” Treadway said.

It was at the 1957 Rose Bowl that Duncan showed a flair for the audacious. The players were asked what their Christmas wishes were and he blurted out what his teammates no doubt were thinking:

"I said, 'I don't care about a Rose Bowl victory, I want to take a look at Jayne Mansfield and give her a kiss,'" Duncan recalled, speaking of the famous actress.

Bob Hope heard of Duncan’s quip and decided to make it happen, at the Dinner for Champions before the game. Duncan closed his eyes and puckered up, planting a kiss on Mansfield while his teammates roared their approval.

When Ploen graduated and went to play in the CFL, Duncan took over. In 1957, he helped the Hawkeyes finish 7-1-1 and was named first team all-Big Ten Conference.

His senior year was arguably the finest in Iowa football history and produced the school’s most recent Rose Bowl win. Duncan led the nation in both completion percentage and passing yards as Iowa cruised to the Big Ten championship and destroyed California 38-12 in the Rose Bowl to finish the season 8-1-1 and ranked No. 2 in the coaches’ poll. In Iowa’s lone loss, 38-28 to Ohio State, Duncan completed 23-of-33 passes for 249 yards.

The Iowa teams that Duncan quarterbacked included such football titans as Alex Karras, Jim Gibbons, Bob Jeter and Willie Fleming. There was never a question of who the leader was.

“He was a terrific player and he made everyone around him better,” said Bob Bowlsby, now the commissioner of the Big 12 Conference whose earliest childhood memories of attending Iowa games were when Duncan played. The two later became friends.

Duncan played two seasons for a losing British Columbia Lions team in the CFL, later regretting not joining the Packers at the beginning of the Vince Lombardi era. But a law career was dominating his plans anyway. He was studying at Drake in the off-season and signed with the Dallas Texans (now the Kansas City Chiefs) of the old American Football League because it allowed him take law classes at Southern Methodist University in the evenings.

After one year on the Texans’ bench, Duncan gave up football for good and finished his law degree at Drake. The choice didn’t surprise those who knew him.

“He was a student and he knew what he was doing and it was kind of natural,” said Elliott, who later became Iowa’s athletic director and still lives in Iowa City.

Bowlsby met Duncan as a graduate student at Iowa and the two struck up a friendship. They were investors together in a bank at one point. Bowlsby went into a career in athletic administration, including a time as Iowa’s athletic director, and continued to seek out Duncan for his level-headed advice.

“I just always knew that when I had a difficult topic that Randy had some experience with, I could always get the unvarnished perspective from him,” Bowlsby said. “Sometimes he would tell me things I didn’t want to hear, but I knew they were always well thought-out.”

Duncan was a philanthropist who remained involved in University of Iowa sports and in the law community in Des Moines throughout his life. He was diagnosed with brain cancer four years ago, and it resurfaced in June. This time, Duncan decided not to fight it.

On the opening day of the State Fair this August, Duncan was the honorary “Iowan of the Day.” He was too ill to attend. Paula and Scott accepted the award on his behalf.

"From Osage to Mason City to Des Moines and to Iowa City, dad has been a lifelong Iowan,” Scott told the crowd. “He has given so much back to this state because the people of Iowa have given him so much in his lifetime. And for that we thank you very much."

Duncan’s dual legacy will be as one of Iowa’s biggest gridiron stars, but also as a sharp lawyer and businessman who never strayed from his roots.

“He’s one of those iconic Hawkeyes,” Bowlsby said. “But Randy was a lot more than a football player.”