The Hawkeyes' quarterback continues to soldier on, even with unimpressive statistics.

MINNEAPOLIS — As Iowa tried to milk the clock nursing a seven-point fourth-quarter lead, C.J. Beathard once again hurtled his body in harm’s way for the good of the team.

Instead of throwing the ball away or stepping out of bounds on third-and-7, he tried rushing for a first down, knowing that’d keep the clock moving. He paid for that 4-yard gain, getting flipped by Minnesota’s Nick Rallis and Jaylen Myrick and crashing to the ground.

It was another example of Beathard’s toughness helping pull out a fourth-quarter road win. The quarterback improved to 8-0 as a road starter with Saturday’s 14-7 victory at TCF Bank Stadium.

The Iowa QB discusses a 14-7 win at Minnesota.

“That guy, he’s crazy,” fellow fifth-year senior George Kittle said. “Like I said last year, he’s the dude. He runs our offense. He’s the best leader we have. I don’t really want him to be doing that stuff because I don’t want him to get hurt. But he can do whatever he wants, because he’s the dude.”

Beathard took a number of hard hits; just another Saturday in his Hawkeye career. Fans certainly remember him spending much of last year’s 12-2 campaign powering through a torn groin muscle.

One of Saturday’s punishing blows came when he slid, rather ungracefully, for a 3-yard gain on third-and-1. The hard shot from Minnesota’s Jacob Huff, though, did the most damage to Beathard’s knee brace.

True freshman Nathan Stanley entered for one play — handing off to LeShun Daniels Jr. for no gain — before Beathard returned (to throw an interception).

Though Beathard’s statistics were pedestrian at best (17 of 31 for 142 yards with two interceptions), he soldiered on like he always does.

“I’ll definitely be sore,” he said. “But I actually feel better physically after this game than I did after (a pounding at) Rutgers, which is surprising.

“I think after a day or two, I’ll feel pretty healthy.”

Iowa’s senior cornerbacks haven’t been tested a lot this season, largely because opponents have been so successful running the ball.

But on Saturday, Desmond King and Greg Mabin were able to make big defensive plays.

Mabin was targeted repeatedly during Minnesota’s last-gasp drive. He gave up completions of 21 and 15 yards to Rashad Still (both of which were ruled catches after replay review), but bounced back to provide excellent coverage after Minnesota got to Iowa’s 13-yard line.

On Mitch Leidner’s fourth-down heave to Brian Smith, Mabin was right there. Incomplete. Game over. 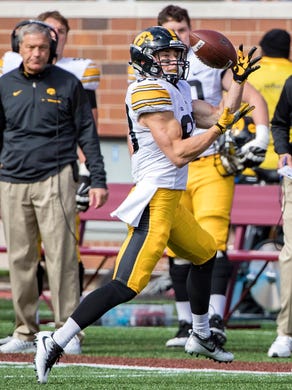 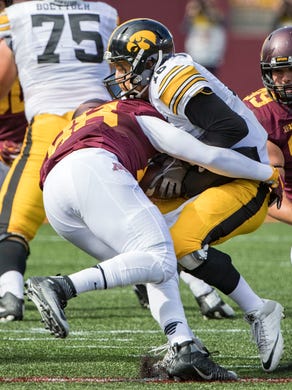 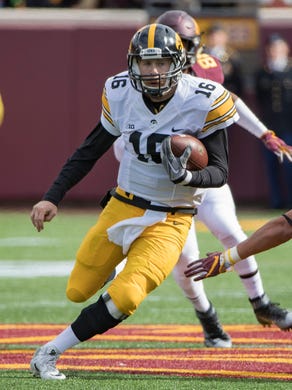 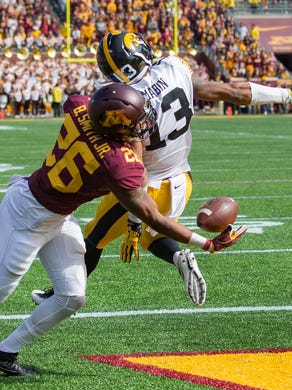 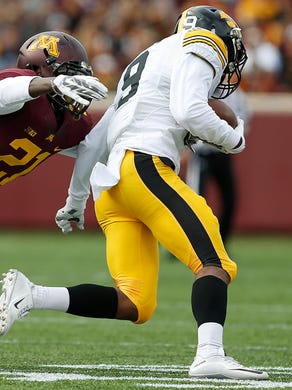 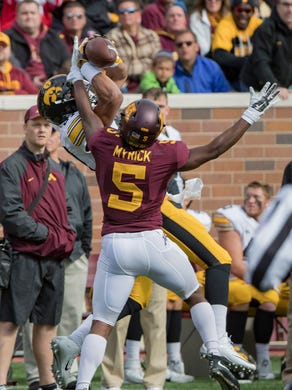 “They got those first two big ones. It was frustrating,” Mabin said. “But I had to put it behind me, and I just had to play my proper techniques and make a big play on the last play.”

“Their secondary is physical on our receivers,” he said. “We didn’t have as much space to catch the ball as we did on other teams.”

King, the all-American, was fantastic and suffocating as usual for the Hawkeyes. He enjoyed the fact that Minnesota scored 51 in the teams’ previous meeting here at TCF Bank Stadium, and just seven Saturday.

“Back in 2014 … all of us take ownership of that,” King said. “This year, we came up here with a different message. Play our hearts out, play the full 60 minutes.”

Several rookies had noticeable performances in Saturday’s win — a positive sign for the future.

Most notably, cornerback Manny Rugamba was regularly inserted as a nickel back and he picked off Leidner for his first career interception late in the second quarter.

“That’s what hard work gets you. You get rewarded for the things you do in practice,” King said of Rugamba. “We’ve got to keep him humble about it, and have him ready for his chance to come again.” Noah Fant was activated for season-high minutes as the No. 3 tight end. The true freshman from Omaha was targeted twice; mishandling one long pass but grabbing another for four yards.

“Noah’s a guy with special abilities. He’s going to be an incredible player,” starting tight end Kittle said. “Incredibly fast. He can do about anything he wants. We’re just trying to get him involved more, give him some reps. He did a really good job today with those reps. Just trying to build trust with him.”

Two other true freshmen were noticed on special teams. Safety Amani Hooker was active on kick coverage, and Keith Duncan was true on two field goals and remains perfect for the season — 21-for-21 on PATs, 4-for-4 on field goals.

Instead of having first-and-10 at Minnesota’s 46, the Hawkeyes were flagged for 15 yards when Akrum Wadley fired a low block on a Minnesota defender that was engaged with left guard Ike Boettger. 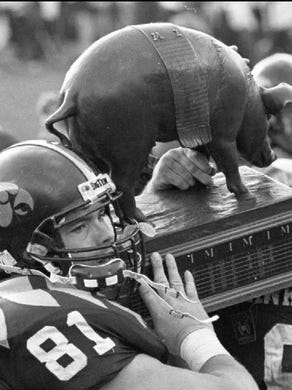 From 1995: Chris Knipper (81) and Jeremy McKinney of Iowa carry off Floyd of Rosedale, the spoils of the Hawkeyes' 45-3 victory over Minnesota. Baumert Harry Copyright 1995 Des Moines Register
Fullscreen 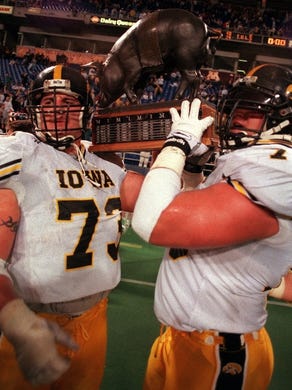 From 1996: Ross Verba, left, who happily hoisted the Floyd of Rosedale trophy with Iowa teammate Mike Goff after the Hawkeyes beat Minnesota, 43-24, says he is happy to play in the Alamo Bowl again. Neibergall Bill Copyright 1996 Des Moines Register
Fullscreen 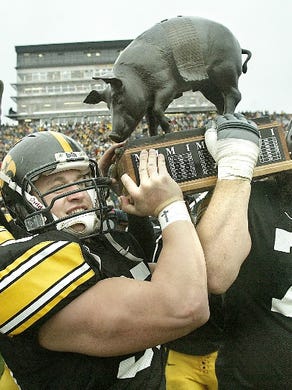 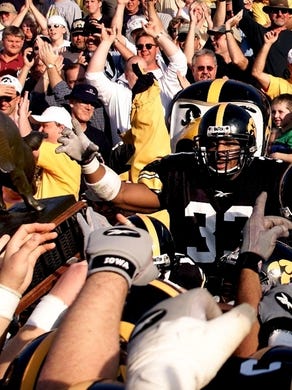 Bob Sanders (33) joins an emotional postgame ceremony in 2001 as the Hawkeyes reclaimed the Floyd of Rosedale trophy after a 42-24 victory over Minnesota for Iowa's sixth win this season. Register file photo
Fullscreen 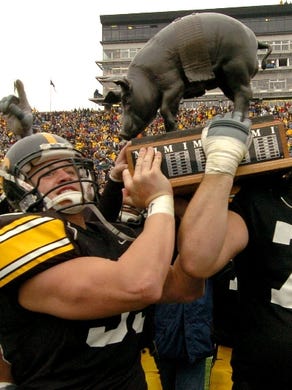 Minnesota's Steve Shidell (64) and John Shevlin, right, lead the pack with the victor's spoils as they carry Floyd of Rosedale, a bronze pig, around the field after beating Iowa 34-24 in a football game Saturday, Nov. 18, 2006 in Minneapolis. JIM MONE/AP
Fullscreen 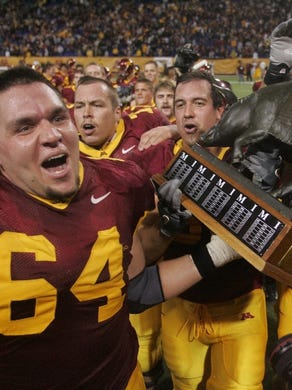 Minnesota players celebrate with the Floyd of Rosedale, Saturday November 18,2006 at the Metrodome in Minneapolis, Minn. after defeating Iowa 34-24. Matthew Holst/PC photo
Fullscreen 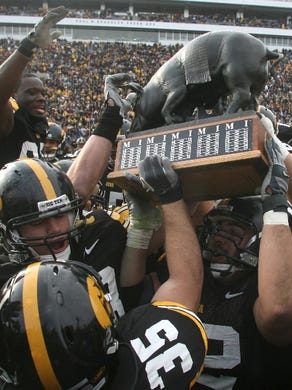 Rafael Eubanks (52) and the rest of the Hawkeyes celebrate with the Floyd of Rosedale trophy after defeating Minnesota 21-16, Saturday November 10, 2007, at Kinnick Stadium, in Iowa City, Iowa. Press-Citizen / Matthew Holst
Fullscreen

Iowa's Kenny Iwebema hoists the Floyd of Rosedale over his head as he leaves the field after Iowa defeated Minnesota 21-16, Saturday November 10, 2007, at Kinnick Stadium, in Iowa City, Iowa. Press-Citizen / Matthew Holst
Fullscreen

Iowa's Jayme Murphy and Chad Geary carry the Floyd of Rosedale off the field after the 12-0 victory over Minnesota, Saturday, Nov. 21, 2009, at Kinnick Stadium, in Iowa City, Iowa. Press-Citizen / Matthew Holst
Fullscreen 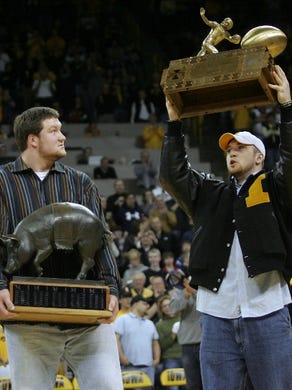 For the second consecutive year, the Minnesota Golden Gophers took Floyd of Rosedale off the field after defeating the Hawkeyes 22-21 at TCF Bank Stadium in Minneapolis. Benjamin Roberts / Press Citizen
Fullscreen

Unlike two weeks ago at Rutgers, when Ferentz was critical of low-blocking interpretations, this one was just an unforced Hawkeye error.

“Sloppy play, probably. It wasn’t malicious,” Ferentz said. “When I think of a chop block, I think of something malicious. As long as somebody’s got hands up above and cuts below … it’s a chop block. I’ve got no arguments on that one.”

Sophomore free safety Brandon Snyder continued his growing reputation as a turnover machine. He recorded two Saturday: a recovery of Rodney Smith’s fumble in the first quarter and an interception on Minnesota’s next-to-last drive.

“Just 11 hats to the ball, that’s what we focus on,” Snyder said. “Always just be around the ball.”

Snyder has accounted for a turnover in four straight games — an interception against North Dakota State; a key forced fumble and recovery at Rutgers; and a forced fumble last week vs. Northwestern.

Riley McCarron led Iowa in receiving for the second straight week, with six catches for 68 yards. But he dropped two passes and lost a fumble. Iowa misses Matt VandeBerg. … Wadley, with 14 carries for 107 yards, topped 1,000 rushing yards for his career. He now has 1,098 yards on 181 carries with 16 touchdowns. … Beathard surpassed 5,000 career yards of total offense in the win. ... A telling quote from Claeys: “This game is a pretty simple game. We got whipped up front.”