Keegan Render of Indianola got his second career start, which went far better than his first. 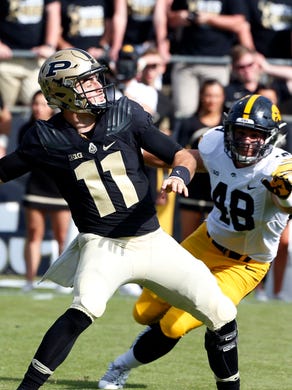 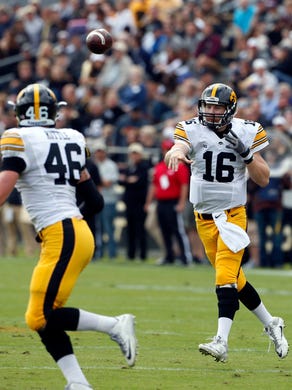 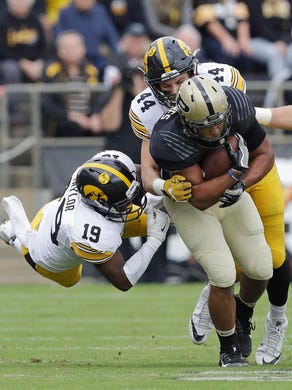 Iowa's Riley McCarron runs out of the tackle of Purdue's Antonio Blackmon during the first half of an NCAA college football game, Saturday, Oct. 15, 2016, in West Lafayette, Ind. Darron Cummings/AP
Fullscreen 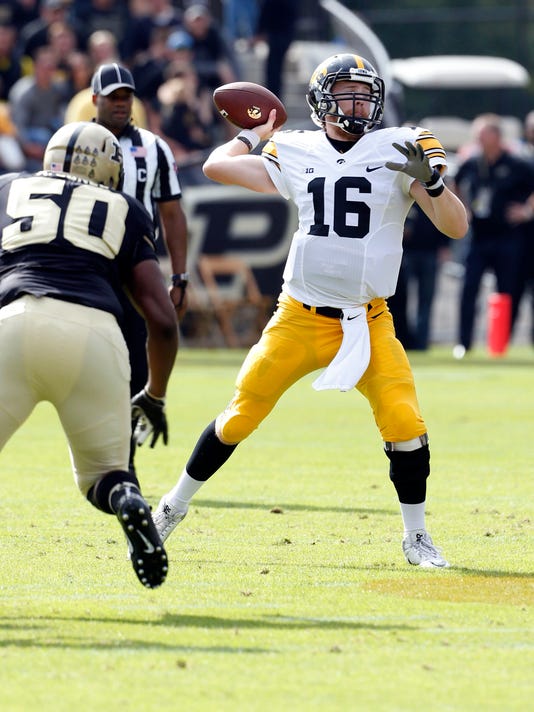 WEST LAFAYETTE, Ind. — The result of Keegan Render’s second career start was a lot better than his first.

The redshirt sophomore from Indianola got the call Saturday as Iowa’s starting left guard, a result of the latest offensive-line shuffle with right tackle Cole Croston unavailable because of a left leg injury.

With Croston (16 career starts) out, Iowa slid Ike Boettger from left guard (where he made his first career start last week) to right tackle (where he has 12 starts). That opened the door for Render, who was part of an offense that racked up 520 yards — including 365 on the ground — in a 49-35 win over Purdue at Ross-Ade Stadium.

AkShun aplenty as Hawkeyes toy with Purdue on the road

Render’s first start wasn’t as memorable. He started Sept. 17 at right guard in place of injured Sean Welsh against North Dakota State as Iowa was held to 34 net rushing yards in a 23-21 loss.

“A lot better. Just felt more confident, obviously, out there,” Render said. “As a team, I thought we played really well. Came off the ball and did what we wanted.”

Render said he prepared all week as the starter, so this wasn’t a surprise.

Iowa coach Kirk Ferentz categorized Croston as day-to-day and was hopeful he would return for Saturday’s game at Wisconsin.

Croston’s return would help, because starting left tackle Boone Myers hobbled off later in Saturday’s game with an ankle sprain. Again, Ferentz said “hopefully” he would return vs. the Badgers.

So the offensive line’s health — especially with tight end George Kittle’s uncertainty — will be a primary topic of discussion this week. “Three, four, five weeks ago, I wouldn’t have said anything about Levi,” Ferentz said. “I wouldn’t have mentioned he’d have been the next guy in. But he’s been quietly ascending in practice. He’s been working hard.”

King gets his pick … and six

Though the all-American cornerback experienced an afternoon of hiccups, his last play of the day felt awfully good.

King picked off David Blough, his first interception in 11 games, and returned it 41 yards for a touchdown to give Iowa a 49-28 lead with 1:44 left.

It was King’s 12th career interception and third pick-six.

“It felt really good,” King said. “It’s a blessing to have it, of course. Thanks to my defense turning into offense with their blocking.

The Thorpe Award winner got his first pick this season in his seventh game.

“(Coaches) probably wanted me to get down. I felt like I had the opportunity to go into the end zone.”

Earlier in the game, King — who entered the game having allowed just 70 yards on 22 opponent targets (10 receptions) — gave up his longest-gainer of the season. Purdue senior DeAngelo Yancey got behind him for a 38-yard reception up the left sideline in the second quarter.

A little earlier, King was flagged for a 15-yard personal foul on an unnecessary late hit. And he, along with safety Brandon Snyder, was in the vicinity of Blough’s 53-yard touchdown connection early in the third quarter that made it 35-14.

“Just a miscommunication in the back end, just giving up the big play,” King said. “Those are the kinds of things we want to eliminate each week.”

Ferentz took a timeout in the middle of the first quarter, solely to give officials an earful after a chop block was called on an Iowa second-and-goal running play from the 2.

As you probably remember, Ferentz was pretty vocal about officiating inconsistency on a new NCAA cut-blocking rule after the Sept. 24 win at Rutgers.

“The cuts are the ones that got me upset,” Ferentz clarified. “Not the chops.”

The Iowa coach saw good and correctables in a 49-35 victory.

On this one, though, Ferentz admitted that he probably jumped the gun on being upset after left tackle Myers and center James Daniels were flagged for a chop block, defined as one player performing a cut block on a defender that is already engaged by another offensive player.

(And it didn’t end up being significant, with Beathard running for a touchdown three plays later.)

“I’ve never seen that called in that situation, but they were in a defense that was unusual for that situation,” Ferentz said. “So when it was explained to me by our guys, I can see why it happened. I did apologize to those guys later on.”

It needs to be mentioned that the middle of Purdue’s defense was gashed even before Iowa started running plays.

Stud defensive tackle Jake Replogle, rated one of the top-five NFL prospects at his position, was withheld from playing because of concussion protocol. The 6-foot-5, 289-pound senior had made 29 consecutive starts and has 28½ career tackles for loss.

Also missing Saturday was middle linebacker Ja’Whaun Bentley. The Boilermakers were hoping to have the three-year player with 152 career tackles back for the Hawkeyes, but Bentley sat with an ankle injury.

Their absences were noticed: Iowa rushed for 269 yards in the first half alone, with Akrum Wadley bursting through the middle for a 75-yard touchdown that put the Hawkeyes ahead 35-7 at halftime.

“They were missed, but you can’t think like that,” Purdue defensive end Evan Panfil said. “We have a ‘next man up’ mentality and guys just have to perform.”

On offense, Purdue was without leading receiver Dominique Young. He suffered a season-ending knee injury in last week’s overtime win at Illinois.