The Hawkeyes have won a school-record nine straight on the road, but head into Beaver Stadium having not faced a crowd bigger than 50,000 this season

IOWA CITY, Ia. — At some point Saturday night, the sheer magnitude of Beaver Stadium will leave a few Hawkeyes in awe.

Mouths agape. Eyes up into the soaring lights. A deafening “white-out” crowd. Kirk Ferentz is counting on it.

“When you’re on the road and you’re hated, you can use it as your identity,” Iowa defensive end Parker Hesse said Tuesday. 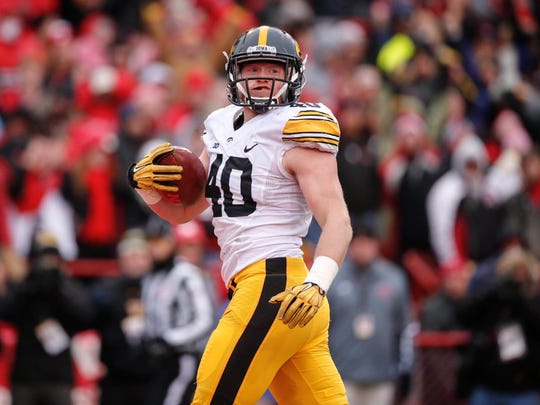 Iowa defensive end Parker Hesse intercepted a pass and scored in a win at Nebraska in 2015, the biggest road crowd the Hawkeyes have faced since 2013. (Photo: Bryon Houlgrave/The Register)

"When you’re on the field, there’s not much difference between 70,000 and 100,000. Even though you enjoy the noise, you realize nothing outside the white lines matters or has any effect on the game.”

The Hawkeyes have won a school-record nine straight road games, including three in conference play this season.

“It’s going to be loud, crazy, all that stuff,” Ferentz said. “But if you like college football, what more can you ask for than to go into a good environment?”

Iowa’s last chance to play in central Pennsylvania was in 2011. A 13-3 afternoon loss opened the Big Ten slate at the second-largest college football stadium in the country.

The Hawkeyes have played two games at six-digit venues since: a 2012 loss at Michigan and a 2013 loss at Ohio State, which featured appearances by freshmen LeShun Daniels Jr., George Kittle and Matt VandeBerg.

“If you love Big Ten football, you love going to places like this and getting to play,” Iowa left guard Ike Boettger said.

“It’s a once-in-a-lifetime opportunity for me.”

The Iowa coach is focused on his current players this month.

Iowa’s unblemished road record will go head-to-head with Penn State’s 5-0 home mark, which comes on the heels of an Oct. 22 upset of then-No. 2 Ohio State.

Third-year head coach James Franklin added to Saturday’s build-up by asking PSU fans on Twitter why they could only use their “white-out” for upsetting the Buckeyes. It should help the traveling Hawkeye fans stand out, as white shirts and towels will be on the home sidelines and throughout the massive seating sections.

“I was really talking about the mentality and what we need, in terms of an environment and excitement in the stadium,” Franklin said at his weekly press conference Tuesday. “But it kind of went crazy — went viral — and people ran with it.

“We need that stadium rocking on Saturday to make sure we have a true home-field advantage.”

All that matters is Iowa, Iowa, Iowa! We NEED the stadium sold out & rocking on Sat night! #107kStrong will make a huge impact on the game

While Penn State handled Purdue last week, the Hawkeyes were healing up and taking advantage of a bye week. The progress each team made will be telling as they enter the final third of the regular season.

Iowa has a historical advantage in Happy Valley, going 7-5 on the road and 9-7 overall since Penn State joined the Big Ten.

But this team will be focused on bowl eligibility while trying to put away a hot team and crowd.

“It’s the stuff you dream about as a kid,” Iowa quarterback C.J. Beathard said. “Going into a stadium like this, (for a) night game; it’s going to be awesome. You can bet we’ll be juiced for this game and ready to go.”

Weather: Around 50 degrees by kickoff, cool and clear, wind from 5-10 mph