CHAMPAIGN, Ill. — The wind was blowing so hard Saturday that it would have been cited for speeding in University Heights.

That’s why Iowa took the unusual step of winning the coin toss and immediately agreeing to kick off in both halves against Illinois. Coach Kirk Ferentz didn’t want the wind in the face of his offense in the first quarter.

The result, although no one could have predicted it at the time, was that the Illini never kicked off in a 28-0 Iowa victory at Memorial Stadium.

They sure punted a lot, though. So often that Illinois used two punters, with Ryan Frain getting eight attempts and David Reisner spelling him on two occasions. Maybe Frain was on a punt count.

Iowa compounded the weirdness early with three punts of its own, followed by two turnovers, a punt-return touchdown from Riley McCarron, another punt and a kneel-down to end the half. There was also some cutesy play-calling that seemed unnecessary against an Illinois defense that had allowed every Big Ten Conference opponent to rush for at least 171 yards.

Normalcy returned in the second half, at least for the Hawkeyes. The defense was playing another great game, throwing in a pair of turnovers of its own to go with those 10 forced punts and two stifled fourth-down attempts by Illinois.

The offense decided to do some pounding of its own. This has long been the recipe for successful November football in colder climes.

Take control of the lines of scrimmage. Run the ball until the defense gives up. Don’t worry about style points. Ultimately, the Hawkeyes turned to it, got the win they needed and flew home in the very headwind that defined Saturday’s game.

“It was ugly in the first half,” Iowa quarterback C.J. Beathard acknowledged. “I think we came out in the second half ready to go. We had a couple good drives going there in the first half and just hurt ourselves with big penalties and turnovers. I think we knew if we could step on the gas, we’d be all right.”

Iowa gained 182 yards rushing in the second half, getting two touchdowns from LeShun Daniels Jr. and one from Akrum Wadley. The Hawkeyes held the ball for 18 minutes, 8 seconds after intermission.

Beathard said the wind was a big factor in Iowa’s gameplan, but felt that it actually worked in the Hawkeyes’ favor.

“I think it helped us, if anything, just the fact that we’re a good run team,” he said. “I think we’re better running the ball than they are.” 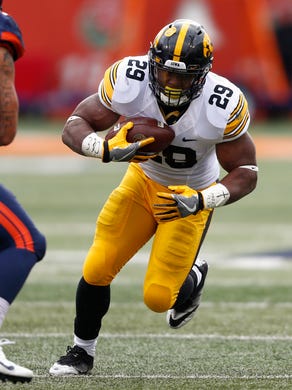 LeShun Daniels Jr. of the Iowa Hawkeyes runs the ball during the game against the Illinois Fighting Illini at Memorial Stadium on Nov. 19, 2016 in Champaign, Ill. Michael Hickey/Getty Images
Fullscreen

Iowa wide receiver Riley McCarron (83) is congratulated by defensive back Desmond King (14) after McCarron returned of a punt for a touchdown during the second quarter of an NCAA college football game Saturday, Nov. 19, 2016, at Memorial Stadium in Champaign, Ill. Bradley Leeb/AP
Fullscreen

Iowa running back LeShun Daniels Jr. (29) is knocked out of bounds by Illinois defensive back Stanley Green (17) during the second quarter of an NCAA college football game, Saturday, Nov. 19, 2016, at Memorial Stadium in Champaign, Ill. Bradley Leeb/AP
Fullscreen

Akrum Wadley of the Iowa Hawkeyes runs the ball and is tackled by Tre Watson of the Illinois Fighting Illini from behind at Memorial Stadium on Nov. 19, 2016 in Champaign, Ill. Michael Hickey/Getty Images
Fullscreen

Zach Grant of the Illinois Fighting Illini cradles the ball in his legs that would eventually be called incomplete as Ben Niemann of the Iowa Hawkeyes defends at Memorial Stadium on Nov. 19, 2016, in Champaign, Ill. Michael Hickey/Getty Images
Fullscreen

Beathard passed for only 80 yards and still it was Iowa’s best offensive showing in four weeks. That’s how dominant the offensive line was. That’s how potent Daniels and Wadley were.

Daniels gained 159 yards on 26 carries. Wadley added 82 on 13 touches. That’s an average of 6.2 yards per tote. That’ll work at any level in any weather. Against Illinois on this day, it felt like piling on.

“Frankly, we looked terrible in the first half. The defense was playing their tails off and we weren’t doing anything to help them,” Daniels said. “So we went into halftime, we got the offense together, like, ‘That’s not us. We’ve got to go out there. We’ve got to do what we do, play how we play.’”

Iowa kicked off to start the second half, its defense forced a three-and-out, and the offense responded with its best drive. Eleven of the 12 plays were rushes, with Daniels gaining 39 yards and ultimately scoring.

The result is remarkably similar totals for the Hawkeye duo. Wadley has 861 yards for the season, Daniels 855.

Iowa takeaways: Why Kirk Ferentz chose to kick off twice

“We’ve gotten to a point this year where we feel like we have two guys that are really strong football players, trustworthy, dependable and great attitudes. They’re just really good veteran players,” Ferentz said. “I was all for Akrum last week and I was all for LeShun this week. The bottom line is you really need both guys. They’ve really complemented each other very well.”

There was nothing fancy about it. There didn’t need to be.

“Just direct, straight runs,” offensive tackle Sean Welsh confirmed. “I think a big part of it too was just making up our mind that we were going to take control and we weren’t going to let it slip.”