Hawkeyes pack 1,812 pounds of key cargo on flight to Tampa

The Hawkeyes’ six core offensive linemen are probably as healthy as they’ve been in three months.

Hawkeyes pack 1,812 pounds of key cargo on flight to Tampa

Just how good are the Gators? Let Ike Boettger and C.J. Beathard explain. 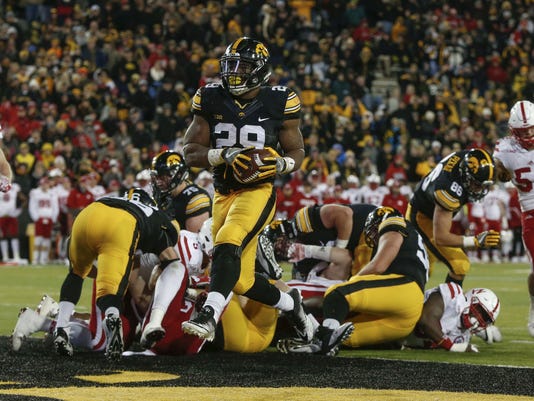 Iowa's LeShun Daniels Jr. runs past a pile of humanity created by his offensive line in the Hawkeyes' 40-10 win against Nebraska.(Photo: Bryon Houlgrave, The Register)Buy Photo

TAMPA, Fla. —  Packed on the Iowa football team’s flight Monday to Florida was the nearly one-ton key to victory in the Jan. 2 Outback Bowl.

The Hawkeyes’ six core offensive linemen are probably as healthy as they’ve been in three months. And they touch down on Florida’s Gulf Coast freshly minted winners of the Joe Moore Award  as the No. 1 offensive-line unit in the country.

“(The award) was really humbling for all of us, with Ohio State and Alabama (as finalists),” Boettger said. “To see us compared to those guys and come out with the award — that was awesome.”

They’ll have to be fundamentally crisp Jan. 2, just like they were in the final three games of the regular season.

A look back at Iowa's Outback Bowl history Leistikow: Hawkeyes' 12 games of Christmas, in their words

The Gators rank No. 6 overall in the country, allowing just 298.6 yards a game.

“They’re physical, fast, instinctive,” Boettger said. “They’ve got everything you look for in a good defense. They’ve got players who know how to play that defense, and they fly around.”

The Gators (8-4) are especially salty in the secondary. Starting cornerbacks Teez Tabor and Quincy Wilson are possible first-round NFL Draft picks in April; Tabor is being projected a top-10 choice.

“They’ve got everything you look for in a good defense — they’ve got players who know how to play that defense, and they fly around.”

And those who follow Iowa football know that passing the ball has been a bit of a chore this season. Even Hawkeye quarterback C.J. Beathard quipped, “We’re just not going to throw it at all. We’re going to run the ball on every play.”

Of course, he’s joking — but he might not be far off.

If Iowa is going to move the ball forward, the offensive line will have to start the moving — just like it did against Michigan to help turn the season around.

It was in that game that the line of Myers, Render, Daniels, Welsh and Boettger pushed the then-unbeaten Wolverines around just enough to scrape out a 14-13 win.

This Florida defense compares very similarly to Michigan’s in athleticism and talent.

For Iowa to win, the Hawkeyes will have to control the clock and the Gators’ replica of Iowa’s Jaleel Johnson.

The question leading up to the Outback Bowl will be: Which Iowa guys?

“I don't know if we have any chemistry — I mean, it seems like it’s been a different line every week.”

Croston (6-5, 307) is returning to health after missing most of the second half of the season with a lower-leg injury. He didn’t play on the line in any of Iowa’s final four games, with Render (6-4, 308) growing into a productive left guard.

Render’s progress was reflective of the banged-up Iowa line in that last three weeks — he just kept getting better and better.

The Hawkeyes rushed for 164 yards against Michigan, 262 at Illinois and 264 against Nebraska.

If Croston were to return — and it seems to be a growing possibility — that’d likely move Boettger (6-6, 307) inside to left guard and Render back to the bench, restoring a line combination that started once, at Minnesota in a 14-7 win.

As for the risk of breaking up a newly discovered chemistry in the offensive line, Iowa's head coach responds: What chemistry?

“I don't know if we have any chemistry,” Kirk Ferentz said. “I mean, it seems like it’s been a different line every week.”

True, Iowa's started seven different line combinations this season. But the Myers-Render-Daniels-Welsh-Boettger alignment was the most frequently used (including in the Purdue, Michigan and Nebraska wins).

Last year, Iowa went back to a once-used offensive line combination during bowl prep (the one that beat Northwestern, 40-10) — and it didn't work out too well. Stanford sacked the Hawkeyes seven times in a 45-16 win.

Hawkeyes columnist Chad Leistikow (@ChadLeistikow on Twitter) will be reporting live all week from Tampa, leading up to Iowa's Jan. 2 game against Florida (Noon CT, ABC).

Hawkeyes reporter Mark Emmert (@MarkEmmert) is following the basketball team to West Lafayette, Ind., for Wednesday’s game at Purdue, then he and photographer Bryon Houlgrave (@BryonHoulgrave) join the coverage team Thursday in Tampa.

As always, check back at HawkCentral.com and download the Hawk Central app for up-to-the-minute coverage.