Desmond King on possible position change, the NFL and returning for senior year

Though King lacks ideal measurables — 5-feet-10, 206 pounds — he has more toughness and better ball skills than most DBs.

Desmond King on possible position change, the NFL and returning for senior year 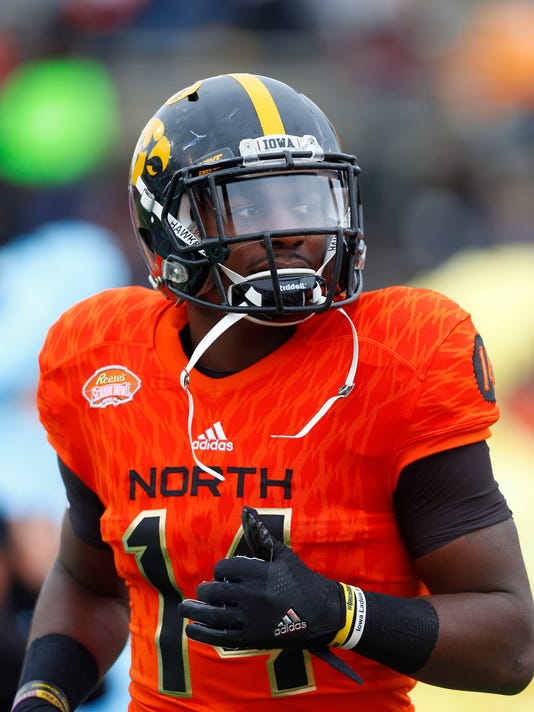 MOBILE, Ala. — Desmond King could have turned pro last year. In many ways, he was ready.

An Iowa cornerback who played his prep football at East English Village Academy, King led the Big Ten with eight interceptions in 2015 and won the Jim Thorpe Award as the nation’s best defensive back.

But when King sat down after the season to consider his options, he decided to return for his senior year for one particular reason: to get the degree he promised his mother he’d finish when he left home three years earlier.

King finished degrees in African-American studies and broadcast journalism and said he hopes to land an analyst job one day down the road.

For now, that dream will have to wait so he can pursue another one — the NFL.

At the Senior Bowl this week, King reaffirmed his place as one of the better defensive back prospects in the country.

Most analysts predict King will go somewhere in the first three rounds of April’s draft, though there is some debate over whether he’ll play cornerback or move to safety as a pro.

Iowa's Desmond King hypes up the crowd during the Hawkeyes' game against Maryland at Kinnick Stadium on Oct. 31, 2015. David Scrivner/Iowa City Press-Citizen
Fullscreen

A live ball falls into the arms of Iowa senior cornerback Desmond King for an interception in the first quarter of the Hawkeyes' 30-3 loss. Bryon Houlgrave, The Register
Fullscreen

Defensive back Desmond King and his Hawkeye teammates go through warmup drills during their first practice from Tampa on Tuesday. Photo courtesy of Brian Ray/University of Iowa Athletics
Fullscreen

One final time, Desmond King will walk out of the tunnel wearing his Iowa Hawkeye No. 14 uniform. The senior cornerback will play in the Jan. 2 Outback Bowl and then start concentrating on an NFL career. Hawk Central
Fullscreen

Iowa cornerback Desmond King bobbles the ball but is able to recover as he and Iowa cornerback Joshua Jackson (right) and MichiganÕs Brandon Watson go after the ball Saturday, Nov. 12, 2016, at Kinnick Stadium in Iowa City. Michael Zamora/The Register
Fullscreen

Iowa wide receiver Riley McCarron (83) is congratulated by defensive back Desmond King (14) after McCarron returned of a punt for a touchdown during the second quarter of an NCAA college football game Saturday, Nov. 19, 2016, at Memorial Stadium in Champaign, Ill. Bradley Leeb/AP
Fullscreen

Iowa cornerback Desmond King (14) and Iowa State receiver Allen Lazard will clash at Kinnick Stadium this Saturday, just as they did in 2014. Register file photo
Fullscreen

Iowa's Desmond King celebrates after forcing a fourth down during the Hawkeyes' game against Wisconsin at Camp Randall in Madison on Saturday, Oct. 3, 2015. David Scrivner / Iowa City Press-Citizen
Fullscreen

Iowa's Desmond King said he is 50-50 whether or not he will go to the NFL or stay with the Hawkeyes for his senior season. Bryon Houlgrave/The Register
Fullscreen 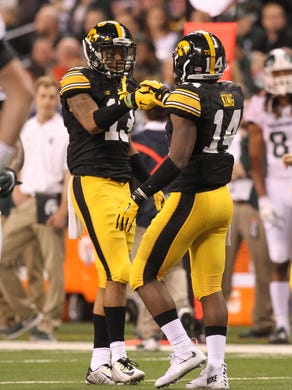 Iowa cornerback Desmond King announced on Tuesday that he was going to return to the Hawkeyes for his senior season. The Jim Thorpe Award winner caught a school-record tying eight interceptions and earned All-American honors. Zach Boyden-Holmes/The Register
Fullscreen 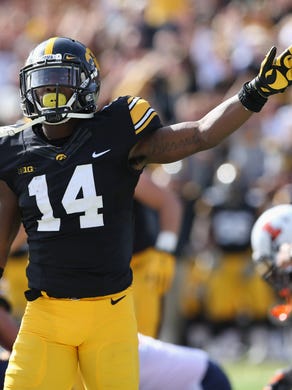 Iowa defensive back Desmond King waits for the ball as Minnesota prepares to punt on Saturday. Bryon Houlgrave/The Register
Fullscreen 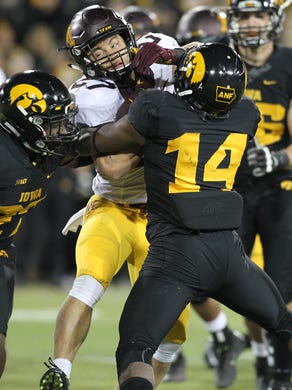 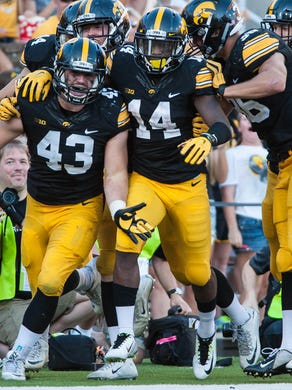 Josey Jewell (No. 43), Desmond King (No. 14) will see a lot of passes from Minnesota on Saturday. Jeffrey Becker/USA TODAY Sports
Fullscreen

Iowa's Desmond King runs an interception back for a touchdown during a game with Maryland at Kinnick stadium in Iowa City Saturday, Oct. 31, 2015. Zach Boyden-Holmes/The Register
Fullscreen

Iowa's Desmond King runs an interception back for a touchdown during a game with Maryland at Kinnick stadium in Iowa City Saturday, Oct. 31, 2015. Zach Boyden-Holmes/The Register
Fullscreen 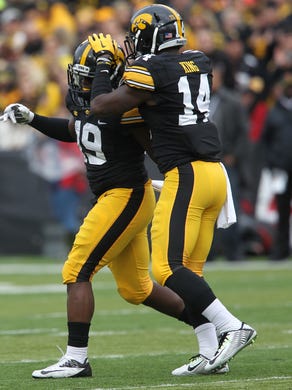 Iowa's Desmond King celebrates with Miles Taylor after forcing a fourth down during their game against Maryland at Kinnick Stadium on Saturday, Oct. 31, 2015. David Scrivner/Iowa City Press-Citizen
Fullscreen

Iowa's Desmond King celebrates after forcing a fourth down during the Hawkeyes' 10-6 win at Wisconsin on Saturday. David Scrivner, Iowa City Press-Citizen
Fullscreen

Iowa cornerback Desmond King intercepts one of his two picks in the first half against Pitt on Saturday, Sept. 19, 2015, at Kinnick Stadium in Iowa City, Iowa. Bryon Houlgrave, The Register
Fullscreen

Iowa cornerback Desmond King celebrates after nabbing one of his two picks in the first half against Pitt on Saturday, Sept. 19, 2015, at Kinnick Stadium in Iowa City, Iowa. Bryon Houlgrave, The Register
Fullscreen 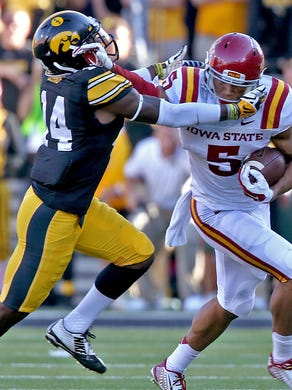 “My thoughts on playing the safety at the next level, it’s going to be tough,” King said. “That’s a part of it. But it’s going to be tough at every position, and it gives you a sort of accountability for the defense, whether putting people in different coverages and different positions. So it’s basically going to be on you. You’re like a quarterback in the back end. Playing safety is a real good task, and I don’t mind playing it.”

King spent the week in Mobile playing right cornerback, typically with the starting defense on the North team, where he played opposite Michigan’s Jourdan Lewis, his former Detroit Police Athletic League teammate with the Westside Cubs.

Though King lacks ideal measurables — he checked in at a shade over 5-feet-10 and 206 pounds at Senior Bowl weigh-ins — he has more toughness and better ball skills than most cornerbacks.

As a prep, King set a Michigan High School Athletic Association record with 29 career interceptions. At Iowa, he had 14 interceptions in four seasons as a starter.

At the Senior Bowl this week, King showed off some of his instincts and physical play. According to Pro Football Focus, he forced three incomplete passes in 10 one-on-one snaps during the first two practices (while allowing five catches) and graded out as the second-best North team cornerback behind Lewis in 11-on-11 drills.

“Just having a knack for the ball and being in the right position, that’s something that I really worked on,” King said. “Ball skills, instincts, things like that that help me on the field and in the classroom.”

King said he’s open to playing either cornerback or safety in the NFL, and he said it’d be “really awesome” to play for a Detroit Lions team that he grew up rooting for.

“The more you can do, the better,” King said. “It doesn’t matter where you’re at on the field. As long as you can come in and contribute as soon as possible and contribute to the team’s success, that’s what counts.”