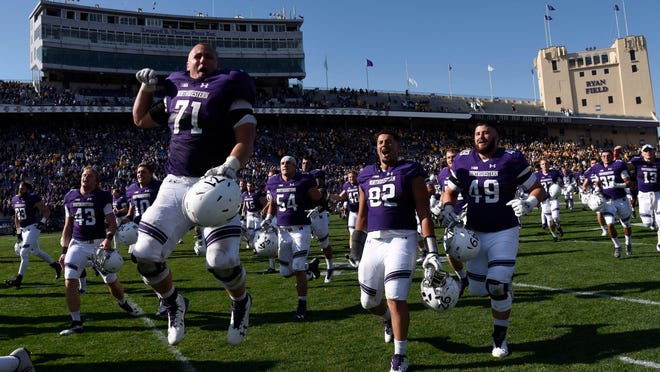 EVANSTON, Ill — Iowa finally got on the scoreboard with 40 seconds remaining in the first half at Ryan Field to take a 7-0 halftime lead over Northwestern.

Here's what we learned:

DEPLETED DEFENSE HOLDING UP: The Hawkeyes are playing without starting middle linebacker Josey Jewell and free safety Brandon Snyder, both out with injuries. But Iowa has held Northwestern tailback to 31 yards rushing and 1 of 7 on third downs.

BIG PLAYS FROM OFFENSE: Iowa quarterback Nate Stanley connected with wide receiver Matt VandeBerg on a 61-yard deep pass late in the half to set up the touchdown. That's an area Stanley has been criticized for throughout the season. The Hawkeyes also have a 26-yard reception by wide receiver Nick Easley, a 23-yarder by tailback Toren Young and an Akrum Wadley 22-yard rush.

More:Chat with us on our Hawkeye live blog!

BUT BOGGING DOWN: Still, the Hawkeyes have hurt themselves with an inability to finish drives. They turned it over on downs at the Northwestern 28-yard line on their opening drive, and then Miguel Recinos pushed a 37-yard field goal wide left on their second.

ALTERNATING PUNTERS: Iowa appears to be letting punters Ryan Gersonde and Colten Rastetter compete for the starting job during the game. Gersonde took the first and third punts, averaging 56 yards, although his first was returned 22 yards. Rastetter rugby-punted the second attempt, netting 55 yards after a good bounce.