Northwestern 17, Iowa 10 OT: What we learned

Northwestern 17, Iowa 10 OT: What we learned 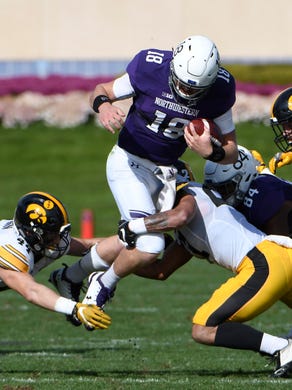 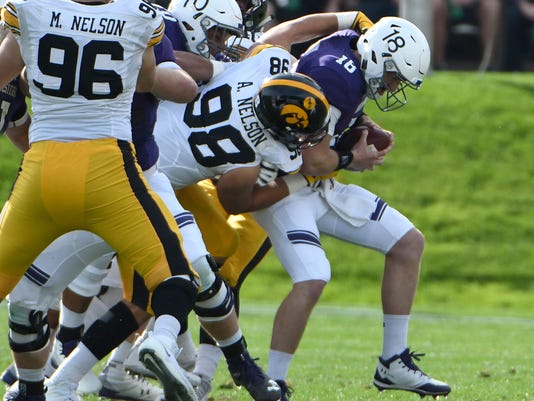 EVANSTON, Ill. — Iowa's offense struggled most of the day Saturday and fell to Northwestern 17-10 in overtime when tight end Noah Fant dropped what would have been a first-down catch.

It was that kind of afternoon for the Hawkeyes at Ryan Field. They gained only 74 yards in the second half while the Wildcats (4-3, 2-2 Big Ten Conference) did just enough to rally from a 7-0 deficit..

The loss sends Iowa to 4-3 on the season, but 1-3 in the Big Ten, all but ending any hope of a West Division title. Iowa hosts Minnesota at 5:30 p.m. next Saturday, and must set its sights on bowl-eligibility in the remaining five games.

Here's what we learned:

DEPLETED DEFENSE HELD UP: The Hawkeyes played without starting middle linebacker Josey Jewell and free safety Brandon Snyder, both out with injuries. But Iowa shut the Wildcats out in the first half before yielding a couple of scoring drives in the second half. The Hawkeyes were particularly impressive on third downs, allowing Northwestern to convert only 4-of-16.

BIG PLAYS FROM OFFENSE: Iowa quarterback Nate Stanley connected with wide receiver Matt VandeBerg on a 61-yard deep pass late in the half to set up the touchdown. That's an area Stanley has been criticized for throughout the season. The Hawkeyes also had a 26-yard reception by wide receiver Nick Easley, a 23-yarder by tailback Toren Young and an Akrum Wadley 22-yard rush in the opening half.

BUT BOGGING DOWN: Still, the Hawkeyes hurt themselves with an inability to finish drives. They turned it over on downs at the Northwestern 28-yard line on their opening drive, and then Miguel Recinos pushed a 37-yard field goal wide left on their second. In the second half, the offense was abysmal, gaining a mere 16 yards in the third quarter while Northwestern rallied. Wadley had 48 rushing yards in the first quarter, but only 42 after that.

GERSONDE LOOKS SHARP: With the Hawkeyes forced to punt six times, at least they could take solace in the fact that freshman Ryan Gersonde turned in a terrific afternoon. He punted five times, with an average of 52.6 yards.

RECINOS CLUTCH WHEN IT COUNTED: Iowa appeared to be passing up a chance at a tying field goal late in regulation on a fourth-and-inches play from the Northwestern 25-yard line. But the right side of the Hawkeye line jumped offside and so coach Kirk Ferentz sent Recinos out for a 48-yard attempt. The junior from Mason City, with the wind at his back, nailed it to force overtime. He is 7-for-9 on the season.