Minnesota coach P.J. Fleck on Hawkeye Wave: 'That's how you make a difference'

Minnesota coach P.J. Fleck on Hawkeye Wave: 'That's how you make a difference'

Iowa Hawkeyes fans began a heart-warming new tradition on Sept. 2 by standing to wave at the children who are watching from University of Iowa Stead Family Children's Hospital. 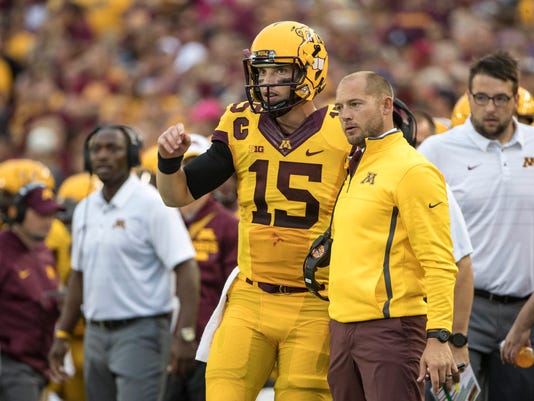 Chalk up one more person who is a big fan of the Hawkeye Wave: Minnesota football head coach P.J. Fleck.

And the 36-year-old first-year Minnesota coach is excited to participate.

“That’s my favorite tradition in college football," Fleck told reporters Tuesday at a press conference previewing the Golden Gophers' 5:30 p.m. Saturday matchup at Iowa. "I know it’s just started — that is my favorite, favorite one.

"For them to be able to do that, that’s special."

For much of the season this year, the Hawkeye Wave has been one of the most popular storylines in college football, and for good reason.

The recently finished University of Iowa Children's Hospital sits right next to Kinnick Stadium, with its top floor featuring the Press Box Cafe — a rotunda of sorts with floor-to-ceiling windows that provide a perfect view of Hawkeye games for patients and families.

After every first quarter this season, fans inside Kinnick Stadium turn around and wave up to the hospital. Inside, patients and their families wave back.

"Those are moments and memories, fans, players, the children in that hospital are going to remember the rest of their lives. ... I really look up to Iowa to do that. I mean, that’s something I would love to do if it hung over our stadium," Fleck said. "That’s how you make a difference. That’s why college football is really special ... for traditions like that.

"We’ll participate in that, as well, and we look forward to it."