For the children and families in the UI Stead Family Children's Hospital including 6-year-old Will Kohn, the end of the first quarter marks the beginning of their brief escape from the hospital walls. 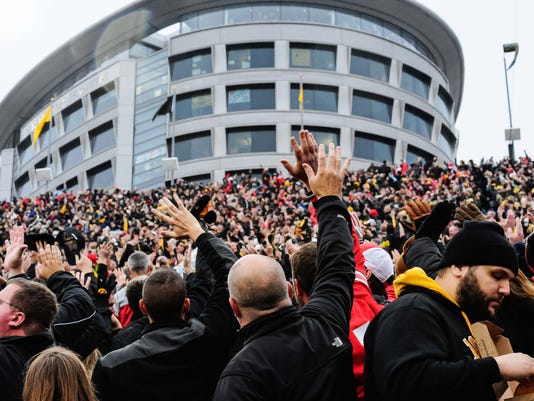 And everyone got to participate at least one more time, too.

"I think the best thing as a coach, it just reminds us all in college football how special we are," an emotional Kirk Ferentz told ESPN's Tom Rinaldi after the Hawkeye head coach, Iowa junior cornerback Josh Jackson and Kaden Kelso — a former University of Iowa Stead Family Children's Hospital patient —  made their way on stage to accept on behalf of the hospital.

The Iowa football program is the 22nd recipient of Disney's Spirit Award.

The best new tradition in college football is rightfully recognized.

At the end of the first quarter of every Hawkeye home game this year, everyone inside Kinnick Stadium tilts their heads up and waves in unison at the new University of Iowa Stead Family Children's Hospital built directly next to the stadium.

The hospital's top floor features the Press Box Cafe, a rotunda of sorts with floor-to-ceiling windows that provide a perfect view of games.

Patients and their families will pack the cafe and watch the Hawkeyes from one of the tallest vantage points in Iowa City. The touching moment has become of the most popular and favorite storylines this season.

Jackson was a finalist for the Jim Thorpe Award, which is given to the nation's best cornerback.

"Being able to play in front of the kids and be a role model to them and give them inspiration and hope, that really makes my Saturdays great to play," Jackson said.

Hear from Josh Jackson on the red carpet and Kirk Ferentz and Kaden Kelso on winning the Disney Spirit Award. pic.twitter.com/1g53yZHWpQ

During the presentation, ESPN re-aired Rinaldi's near-6-minute feature about the Hawkeye Wave. It first broadcast about two months ago during "College GameDay," when Rinaldi spoke with Kirk and Mary Ferentz as well as the patients and parents at University of Iowa Stead Family Children's Hospital.

The feature also took a look at the death of Savvy Ferentz — Kirk and Mary's granddaughter — and the Savvy Ferentz Program in Neonatal Research.

You can re-watch the feature here:

Ferentz again fought back tears while Rinaldi re-interviewed him Thursday. As did Kelso, who retold his own story and what the Hawkeye Wave meant to him as a patient. He was at UI Children's Hospital for 17 days and later got to experience the Wave from within Kinnick.

He received a roaring round of applause when announced he was cancer-free.

"It was just really amazing," Kelso said of being able to do the Wave from inside the stadium. "It was really emotional to be able to look back over there and wave at the children.

"I'm just happy that they chose me to represent them."

The Iowa wave has taken the hearts of the college football world.

Kaden Kelso has experienced both sides of it. And his perspective is amazing. pic.twitter.com/MLyJXFvZNa

At the end of the presentation, Ferentz, Jackson, Kelso and Rinaldi — joined by everyone at the awards ceremony — raised their arms and waved once more to those at UI Children's Hospital.

You can watch the full segment here: