Another day, another round of accolades for Iowa's two defensive stars.

Iowa MLB Josey Jewell says he challenged the team after a 24-15 loss to Purdue.

Iowa's Josh Jackson (15) breaks up a pass intended for Purdue's Jarrett Burgess (80) during the first half of their football game at Kinnick Stadium on Saturday, Nov. 18, 2017, in Iowa City. The Hawkeyes take a 9-7 lead into halftime(Photo: Brian Powers/The Register)Buy Photo

Another day, another round of accolades for Josey Jewell and Josh Jackson.

The Iowa defensive stars were named all-Americans on Thursday by Sports Illustrated, marking yet another outlet that has highlighted Jewell and Jackson’s outstanding 2017 play.

The two were given Walter Camp first-team all-American honors Thursday as well.

On Wednesday, Jewell was named the Associated Press’ Big Ten defensive player of the year, and Jackson was pegged as a first-team all-American by Pro Football Focus. Both players also made the AP's first-team all-Big Ten squad and were selected as first-team Walter Camp all-Americans. 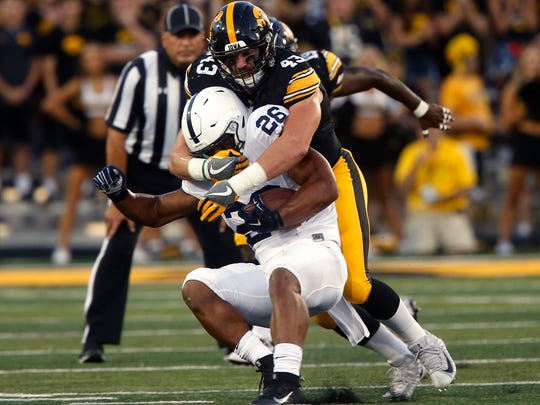 Despite missing a game, Jewell led the Big Ten in tackles (125) and ranked third nationally at 11.4 tackles per game. He was also named the Jack Lambert Award winner as college football's top linebacker. Jackson, meanwhile, racked up seven interceptions and led the country with 25 passes defended.