Four months ago, the 20-year-old center was told he might have a shot at heading to the pros early. Now, he's a potential first-round pick. 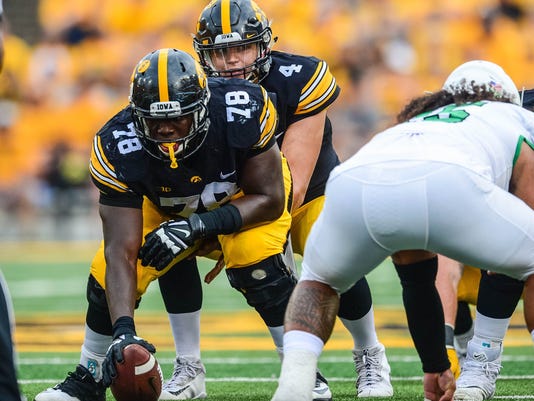 James Daniels has 24 career starts for Iowa, most of them at center, and has played in 35 games in a three-year career.(Photo: Jeffrey Becker, USA TODAY Sports)

INDIANAPOLIS — James Daniels is 20 years old and has formal interviews lined up with 20 NFL teams this week.

If you think the former Iowa center had 20/20 vision in seeing this coming, think again.

“Before the season, there was a whole bunch of stuff that said I was good enough (for the NFL). I never really read that,” Daniels said Wednesday at the NFL Scouting Combine, where he is one of the most intriguing prospects.

His journey here started after the Hawkeyes blew out Nebraska in their regular-season finale. It was then that Iowa coach Kirk Ferentz brought Daniels in for a discussion, telling him he’d have the chance to jump to the professional ranks after his junior year.

Daniels was shocked by the timing of that conversation but not necessarily what the NFL draft advisory subsequently committee told him.

Daniels received a second-round draft grade. And that may have been low.

Notre Dame’s Quenton Nelson is viewed as the best interior offensive line prospect in the 2018 draft. There is growing consensus that Daniels might be chosen right behind him, potentially in the second half of the first round.

“It’s pretty cool,” Daniels said of his whirlwind rise in NFL Draft rankings. “Every time I played in college, I would always take a chance during the game and look into the crowd and just realize how blessed I am to be there, especially with the children’s hospital that’s right outside Kinnick Stadium. You look up halfway through a game and see the children’s hospital and realize how important football is to those kids who have diseases that wasn’t their choice to have.”

Daniels was the subject of much media attention Thursday and handled it like the pro he soon will be. He had thoughtful answers for every question.

On his weight, up to 306 pounds on his 6-foot-3 3/8 frame: “In college, you’re not blocking 320-, 330-, 340-pound defensive linemen, so there’s no point in being 300-plus. Now, I’m making that transition to the NFL, and I decided to gain weight. For me, it was pretty easy. You just eat like a peanut butter-and-jelly sandwich and a protein shake every night and you can gain 10 pounds in a week, two weeks easily."

On his impressive 80 ¼-inch wingspan, which suggests he could play guard or maybe even tackle at the next level: “My freshman year I got thrown in at right tackle, so I can do it all. … My entire true freshman season, I played right and left guard. I didn’t play center my true freshman year. Transition to guard wouldn’t be a problem for me.”

On his ability to think on the fly during games, something former Iowa teammate Sean Welsh pointed to as a Daniels strength: “You have to be able to act quickly. Defenses don’t play one front the entire game. They can do anything. You have to look at tendencies. If they have a linebacker in who’s a good pass rusher, he’s not going to drop into coverage. He’s going to pass-rush 95 percent of the time, so you need to be able to know personnel and know who you’re playing.”

RELATED: Wadley packs on pounds, gets ready to show his speed at NFL Combine

Daniels is in competition with a strong group of prospects one year after the worst NFL Draft ever for offensive lineman, when only 33 got drafted and just two in the first round. It is believed that Daniels, Isaiah Wynn (Georgia), Will Hernandez (Texas-El Paso) and Billy Price (Ohio State) are all potential first-round picks, after Nelson. But one or more of them could also slide to early in the third round.

The good news for Daniels is that NFL decision-makers are valuing offensive lineman who are exceptional athletes, like him.

“When I say playmakers, I’m not just talking about skill players,” said new Colts coach Frank Reich, whose team needs plenty of help after a 4-12 season. “That’s one thing that we learned is that playmaking is at every level. Offensive linemen make plays.”

Daniels proclaimed himself ready to make an NFL impact. But he also revealed that he has kept attending classes at Iowa, even with a million-dollar paycheck in his immediate future. He plans to get his degree next spring and then go on to earn a master’s in public health.

“You can’t play football forever,” Daniels reasoned. “Playing college football, I didn’t expect to be here. After I’m done playing, I actually want to do something.”

That is one mature 20-year-old. The NFL teams lining up to interview Daniels have undoubtedly noticed that as well.