Last fall, Northwestern and Purdue each handed the Hawkeyes stinging defeats; that can't happen this year if Iowa wants to catch Wisconsin. 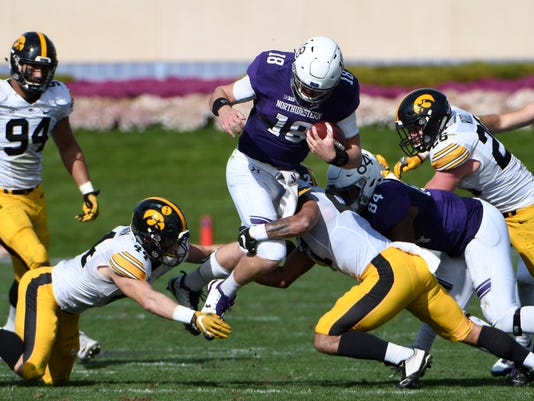 The Iowa defense will likely have to contend one more time with star Northwestern quarterback Clayton Thorson this fall. It's a battle the Hawkeyes can't afford to lose.(Photo: David Banks, David Banks-USA TODAY Sports)

CHICAGO, Ill. — Wisconsin is the target of every football team aspiring to climb to the top of the Big Ten West Division this fall.

Iowa’s coaches and players have not been shy in talking about it all spring after a 38-14 loss in Madison last year raised questions about the competitive gap between the rivals.

But there were two other football teams present at Big Ten media days here Monday that can’t be overlooked — by the Hawkeyes or anyone.

Iowa also lost to Northwestern and Purdue a year ago, both games that easily could have been (and maybe should have been) victories. So when looking at potential usurpers of Wisconsin’s throne, start with the Hawkeyes, Wildcats and Boilermakers. Iowa needs to dispatch of the latter two foes if it seriously wants to think about catching the Badgers.

And how’s this for a coincidence? Northwestern opens the season Aug. 30 with a trip to Purdue. Both teams will enter that with questions at quarterback but also reasons for optimism. Here's a closer look at both teams:

Northwestern waits on QB Thorson, looks for new lead back

The Wildcats won their final eight games last season, one of them a 17-10 home overtime victory against Iowa. They have won 27 games over the past three seasons. Iowa has 28 victories in that stretch.

In other words, these have been the most consistent Big Ten West teams not named Wisconsin lately.

Northwestern coach Pat Fitzgerald believes his alma mater has upped the ante with a $260 million practice facility overlooking Lake Michigan that will open next month. It’s the finest in the nation, he said repeatedly Monday.

“It shows we’re all in, as a program,” Fitzgerald said. “It's one thing to be consistently a bowl team, consistently successful on the field. It's another thing to consistently compete for championships. And we're not there yet, but I believe this commitment to our facilities — but, most importantly, to our student-athletes — gives us every opportunity to do that.”

Fair enough. But first comes that opening game in West Lafayette, Indiana, and the uncertainty that star quarterback Clayton Thorson will be healed enough from a January ACL surgery to participate.

“From the minute he walked out of the locker room in Nashville (after the Music City Bowl) to the minute he walked in here today, he’s inspired our team tremendously ... with the way he’s attacked his rehab,” Fitzgerald said of Thorson, a player he thinks will be a first-round NFL Draft selection. “Those are the things that are in his control. What’s out of his control? Time.”

While waiting for that medical decision to be made, Fitzgerald didn’t hesitate to bring Thorson to media days, where he was certain to face a fresh round of questions about his health.

“I think he’s already been asked a million, so what’s another 100?” Fitzgerald said. “It’s part of the deal with being a quarterback — you’d better get used to being asked a lot of questions about a lot of things.”

The other big question surrounding Northwestern is how to replace running back Justin Jackson, who graduated with 5,440 rushing yards and 41 touchdowns. Fitzgerald knows there’s no one on his team who can provide that production, which will put even more pressure on Thorson, whenever he returns.

Fitzgerald expressed confidence in both Monday. Even better, he said, is that Northwestern returns all five starting offensive linemen, a unit that made strides after some bumpy moments during a 2-3 start to 2017.

Fitzgerald eagerly wants to avoid a repeat of that slow start this year, which will mean beating Purdue — with or without Thorson.

One player that could help make up for the absence of Thorson is sophomore linebacker Paddy Fisher, whose 113 tackles a year ago were the most for any first-year FBS player. He’s a handful.

The Wildcats come to Kinnick on Nov. 10. Circle that one on your calendars, Hawkeye fans.

Purdue coach Jeff Brohm was inspired by his defense last year, and feels it could be quite good again Hawk Central

The Boilermakers are a much trickier outfit to handicap this season. They won their final three games a year ago to finish a surprising 7-6 under first-year head coach Jeff Brohm. That run started with a 24-15 road victory over the Hawkeyes.

What was even more surprising for Purdue in 2017 was that its success was driven in large part by its defense, 24th in the nation at 20.5 points per game allowed. When was the last time you could say that?

“Last year at this time, I was excited about defense and no one else believed it either,” Brohm told reporters Monday.

Seven of those defensive starters have graduated, so he will rebuild the unit around junior linebacker Markus Bailey. Brohm, an offensive guru, called Bailey the best player on his team. Period.

“I think we have some guys that have worked hard as a group and give us a chance,” Brohm said of his defense.

Brohm is looking for an offense that can strike for big gains. Last year, he said, that only happened on kick returns or when he called trick plays.

Toward that end, Brohm is asking more from his wide receivers. He wants to get his tight ends more involved in his offense. He is intrigued by what true freshman Rondale Moore, a one-time Texas commit, can bring to his offense. A video of Moore squat-lifting 600 pounds recently went viral.

Brohm raised eyebrows by bringing both of his quarterbacks — senior David Blough and junior Elijah Sindelar — to Chicago. They both helped the team win games last year and deserved to be here, Brohm explained.

Blough missed time after ankle surgery but was cleared about halfway through spring practices. Sindelar played despite a knee injury last year, but Brohm expects him to be ready to go once fall camp begins.

That’s when he’ll have to make a decision: whether to anoint one as a starter or, perhaps, rotate both of them in games this fall. Brohm said he was willing to do the latter, but seemed to prefer the former.

“Hopefully, about a week-and-a-half before the first game, when you start to concentrate on your first opponent, we'll maybe have a starter ready to go — the other guy on deck ready to step in when we need him,” Brohm said.

It’s a daunting challenge for a team seeking an identity at quarterback and on defense.

“It's important for us to play great competition. And while we may not win as many as we would like, it will help our team get better,” Brohm said bluntly.

Iowa visits West Lafayette on Nov. 3, about the same time the Boilermakers found a winning rhythm a year ago. The Hawkeyes can’t afford to be victimized again if they want to win the West.