Hawkeyes redshirt senior Dalton Ferguson, who became a father of twin daughters on Sept. 7, waved at his two girls Saturday as part of the Hawkeye Wave. 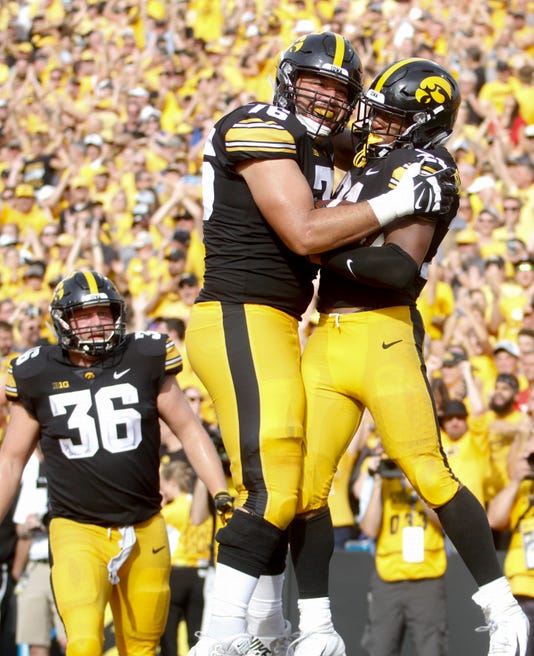 Hawkeyes redshirt senior Dalton Ferguson (76), who became a father of twin daughters on Sept. 7, waved at his two girls for the first time Saturday, after the opening quarter concluded against Northern Iowa.(Photo: Matthew Holst, Getty Images)

IOWA CITY, Ia. — Saturday’s in-state showdown at Kinnick Stadium marked the Hawkeye Wave’s 10th appearance. But for one Iowa player, it was the first chance to wave at his newest family members.

Hawkeyes redshirt senior Dalton Ferguson, who became a father of twin daughters on Sept. 7, waved at his two girls for the first time Saturday, after the opening quarter concluded against Northern Iowa.

Ferguson and his girlfriend, Rachael, gave birth to girls at 6:25 and 6:26 a.m. on Sept. 7. One weighed 5 pounds, 8 ounces, the other was 3 pounds, 4 ounces. Their daughters were five weeks premature, which resulted in an extended stay at the University of Iowa Stead Family Children's Hospital’s neonatal intensive care unit.

CHAT WITH US: Hawkeyes vs. Northern Iowa live blog

"What I had been doing this whole time as a football player here was preparing myself to be a dad, as weird as that sounds," Ferguson told HawkeyeSports.com this week. "It is not easy, but coach (Kirk) Ferentz has given me the tools to be a successful father."

Ferguson also got the start Saturday at right guard, filling in for the injured Cole Banwart.