From special teams action to getting stuck behind Josey Jewell, Jack Hockaday has had a winding career. But the Iowa linebacker has stuck with it and is now a pivotal piece in his senior season. 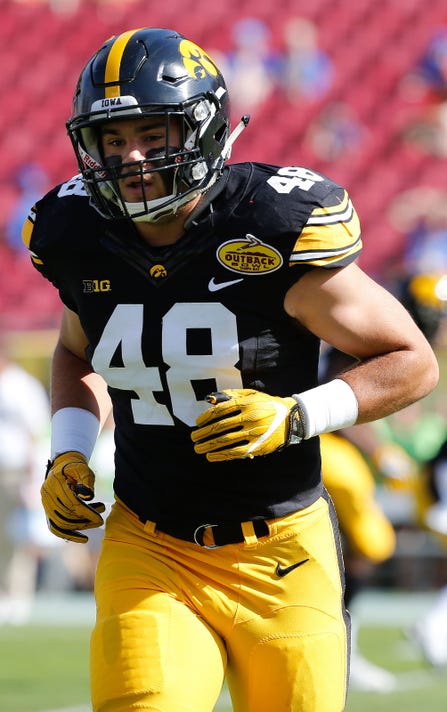 Jack Hockaday got stuck behind Josey Jewell for three years and was mostly limited to special teams action. But in his senior year, the Iowa linebacker has broken three as a key defensive piece.(Photo: Kim Klement, USA TODAY Sports)

IOWA CITY, Ia. — He recounts the pivotal moment with such brevity and nonchalance, almost downplaying the significance. Pluck the words out of conversation and let them stand alone. Is this a Kinnick Saturday description, or something from a Tuesday drill in March?

That Sept. 1 dialogue carried more impact than its simplicity might indicate, finally injecting life into a winding career on its last leg. But Jack Hockaday has never been high on accentuation. Those around him say he’s wired differently — no situation too dramatic, no moment too overwhelming — even if its uncharted ground. It’s one day at a time and nothing more.

Highlight that as to why Hockaday is still standing.

After three years spent grinding away on special teams while Josey Jewell’s shadow loomed overhead, the Hawkeyes’ senior linebacker has broken through on his final attempt.

He’s planted in the middle of Iowa’s thriving defense, signaling in the calls as the team’s co-leading tackler through three games. Hockaday will be there again Saturday night, when the Hawkeyes (3-0) look to prove their worth in a massive home showdown against No. 16 Wisconsin (2-1).

In college football's climate of instant gratification these days, cases like Hockaday’s are vanishingly rare. Not in a meaningful role by your sophomore year? Bye — out the door as a transfer. Stuck behind a linebacker legend who didn’t leave the starting lineup for three years? Gone — somewhere else offering more playing time.

Even this year didn’t begin with a guarantee, as evidenced by Wallace’s in-game command. It took Amani Jones’ Week 1 meltdown against Northern Illinois for Hockaday’s door to swing open. Many in his shoes wouldn’t have been around to barge through.

“His number got called early on in that first game,” safety Jake Gervase said, “and he hasn’t looked back.”

But we will. Answers to why Hockaday hasn’t budged lie in the past.

Maroa, Illinois, only surfaces on the map after clicking “zoom” a few times, but this small town just west of Champaign is engulfed in Hockaday lore.

Before Jack emerged, there was Luke, Rachel, Joe and John — his three siblings and father. All came before the future Hawkeye, helping set the precedent for Hockaday athletic dominance.

John quarterbacked for Maroa-Forsyth High School in the mid-70s and was on staff there for more than a decade. Luke was the oldest — and one of the most decorated under center in program history. He led Maroa-Forsyth to a state title in 2006 and signed with Eastern Illinois before transferring to Division-III Millikin University.

Next came Rachel, an all-state volleyball player who delivered a strong career at Iowa State. Third in line was Joe, a 1,000-yard receiver for Maroa-Forsyth in 2010. For a town that barely exceeds 1,500 people, those are hefty credentials for any one family.

And then in steps Jack, with expectations abundant the minute he arrived on the prep scene.

That could be overwhelming to anyone at 14.

But not for this one.

“That didn’t bother Jack at all,” John says. “The way he’s made, he’s not looking at what others think about him — I don’t think that influences him very much; he’s just not made that way.

“I don’t think he ever looked at it as, ‘I want to be better than Luke or Rachel or Joe.’ He just wanted to be the best that he can be.”

Which was pretty ridiculous.

Even with the legacy up ahead, the youngest Hockaday left town as the family’s crown jewel. He started both ways all four years, racking up state records for most career yards from scrimmage (11,506) and games played (54).

A high school football cheat code at Illinois’ Class 1A and 2A levels, Jack’s versatility made him impossible to shake at any point. He played wide receiver and quarterback, linebacker and safety. Punter, kicker, punt returner and kick returner were quality side jobs.

“Jack was the best player on the field in every game he played in high school,” says the veteran Maroa-Forsyth coach who’s led the program for nearly two decades. “A lot of people in our area will tell you, ‘That kid was here forever.’” 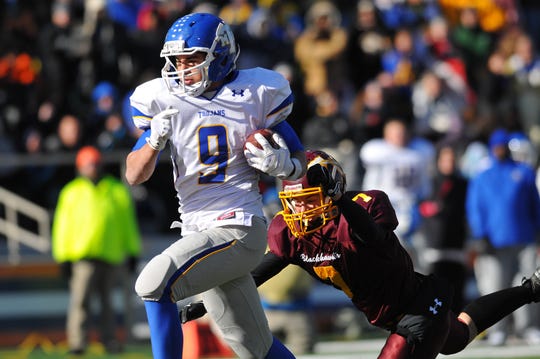 Jack Hockaday was an all-around force at Maroa-Forsyth, setting state records for most yards from scrimmage and games played in a career. (Photo: Bradley Leeb, Associated Press)

The Hawkeyes got in first, offering Hockaday after his sophomore season in which he powered Maroa-Forsyth to the 2012 state title with an absurd championship game performance. Brian Ferentz led the recruiting charge.

Other sizable offers rolled in — Missouri, Nebraska, Illinois, Indiana and others — but there wasn’t much deliberating. Hockaday pulled the trigger in March of his junior year, becoming Iowa’s seventh 2015 commit.

The class went four-deep at linebacker — although 247Sports listed Hockaday as a safety and Rivals pegged him as an athlete — but those closest to the high school phenom never doubted his fortitude.

“He’s just one of those guys who was wired differently,” Jostes said. “There are people who are just different. And Jack has always been one of those.

“The reason why I felt Jack would be successful is he was always ready to compete, even as a freshman playing against kids who were 18 years old and he’s 14. I never thought he would shy away from competition, which I’d imagine the Iowa coaches would tell you has been the case since he got there.”

Blend together all the resources at a college football coach’s disposal, and even the legends aren’t perfect at career predicting. Can’t-miss prospects transform into flops. Lowly rated guys ascend into stars.

The unknowns remain even once guys enter the program. Young standouts can hit a wall after a strong opening just as easily as no-name upperclassmen capitalize on a fleeting chance.

Hockaday uniquely covers both ends of the spectrum. His senior revival started with freshman promise, after cracking various special teams units during Iowa’s magical 2015 season. He made the Rose Bowl roster, one of just a few first-team guys to do so.

At the same time, a legacy was growing.

Jewell’s Iowa career rocketed forward that season, as he became the first sophomore under Kirk Ferentz to be named a permanent team captain.

He was the Hawkeyes’ leading tackler in 2015, garnered second-team all-Big Ten honors and jumpstarted a run as one of Iowa’s greatest. From then on, only once did Jewell leave the starting lineup — against Northwestern in 2017 because of a shoulder injury.

Jack Hockaday (48) has had a winding collegiate journey and got stuck behind Josey Jewell (43) for three seasons. But the Iowa linebacker is making a difference in his senior year. (Photo: Brian Powers, The Des Moines Register)

That left Hockaday spinning tires as Jewell’s overlooked backup. He did what he could on special teams and in mop-up duty, but the stat sheet remained pretty bare. Sixteen tackles in three seasons (2015-17) is a far cry from those high school days. An injury-plagued junior year, which included a dislocated elbow and an appendectomy, didn’t help matters.

No one would’ve blamed Hockaday if he'd chosen to venture elsewhere, given this circumstance was more unfortunate timing than lack of program buy-in.

But that route was never seriously considered. A grounded attitude, unwavering effort and a patient approach kept frustration to a minimum. Sure, there were moments of questioning — only natural when you’re talking about a three-year period — but Hockaday’s level-headed traits made him more adaptable than most to the situation.

“In this day and age, everyone expects to be the guy right away,” defensive tackle Sam Brincks said. “For some of us, it just takes some patience and some stick-to-it (attitude). That’s what he’s demonstrated.”

Kirk Ferentz has seen this story before. The grizzled coach of more than four decades leans on his history, such as it is — almost in a comical way, sometimes — but the past has illustrated valuable lessons.

“You learn from your history that if a guy has a good attitude — if he's giving good effort — you don't give up on him,” Ferentz said this week. “As long as they're trying and doing things the way they ought to be doing them, you just never know how it's going to turn out. That's one of the beauties of sports.”

Even afar from meaningful snaps, Hockaday checked all those boxes during his first three seasons. You could see a crease opening up at linebacker this season following the departures of Jewell, Bo Bower and Ben Niemann — and Hockaday’s hard-nosed style kept him at least in the conversation.

Nothing was guaranteed. It’d be a fight through spring ball and fall camp. But a level playing field had reemerged, providing hope and opportunity for one final shot.

Standing calmly against the wall, images of Iowa greats plastered behind him, Hockaday’s calmness reverberated as he took questions about his strong — but somewhat unexpected — 2018 debut.

The Iowa linebacker discussed his readiness when Wallace gave him the go-ahead, even though much of the preseason chatter had focused on Jones’ reliability in the middle. When that hadn't translated to the game field, it was Hockaday the team looked to for stability.

"Surprised or not, I knew I had to be ready," Hockaday said after the Northern Illinois win. "That's really what my thinking was — 'Going into this game, just be ready. If your number’s called, go in there and do what you need to do to help the team.'"

It sounds simple enough, but for a player who’s had to fight and claw for every collegiate chance over a four-year span, one last opportunity could generate heavy pressure on someone who's unprepared. 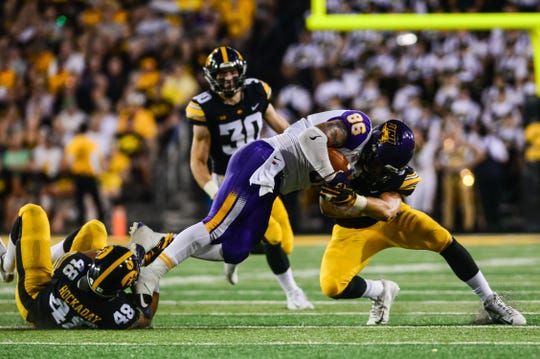 But Hockaday isn’t one to get caught up in the external muck. Things haven’t unfolded perfectly, but that doesn’t matter much now.

“He’s just one day at a time,” John says. “That’s just the way he’s been built. Even though it’s not been easy, we talked about looking at this as a marathon. It’s not a sprint.

“Just take your time and have a long approach on it.”