Jake Gervase has stood tall at safety while those around him shuffle in and out and change roles. The redshirt senior is one of the biggest reasons why Iowa is 6-1.

Jake Gervase breaks down his consistency, steadiness at the back of Iowa's defense Hawk Central 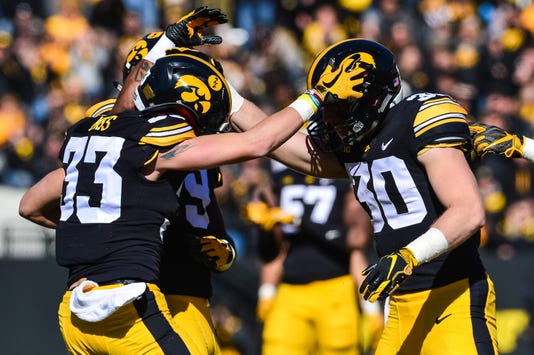 Jake Gervase (30) has been huge in providing stability on the defensive backend, while also bringing along newcomers like freshman cornerback Riley Moss (33). Gervase is a big reason why Iowa is 6-1.(Photo: Jeffrey Becker, USA TODAY Sports)

Inside the Hawkeyes football complex, the Iowa safety stands against the wall as reporters ask away. Fall Tuesdays are media friendly in Iowa City. A dozen or so players talk each week, and Gervase is almost always selected as a program spokesperson.

He’ll break down Iowa’s mental approach one minute, then dish out praise on newcomers the next. When it comes to player access in college football, schools don’t trot out loose cannons who’ll venture off the rails. There’s reliability and trust in those who speak publicly.

Consider that among the many reasons why Gervase is one of most respected Hawkeyes on a team that’s tiptoeing toward greatness. Steadiness and consistency define the redshirt senior, whether it be with a recorder or defender in front of him. No. 18 Iowa (6-1, 3-1 Big Ten Conference) will need plenty of Gervase on Saturday, when the Hawkeyes travel to No. 16 Penn State (5-2, 2-2) for a pivotal road showdown.

“His role as a leader has been tremendous throughout the season,” linebacker Kristian Welch said. “If you have confidence to go out there and be able to execute your job, that’s obviously very important. He’s just bringing it every day.

“He’s a centerpiece who guys can get behind.”

That dependability has been paramount on a defense that — while dominant through this 6-1 start — has been full of moving parts. A peek back at Iowa’s season-opening starting back seven illustrates how much shuffling there’s been around Gervase.

Against Northern Illinois, the Hawkeyes began with Amani Jones, Nick Niemann and Welch at linebacker, Matt Hankins and Michael Ojemudia at corner and Amani Hooker alongside Gervase at safety.

Jones lasted a couple series before fading out of contention. Welch and Niemann — as well as senior Jack Hockaday — have all missed at least one game with injuries, causing massive shifting among the linebacker unit. Also dinged up are Hankins and Ojemudia, neither of whom are expected to start for the fourth straight week. Hooker hasn’t left the main rotation, but he’s now morphed into a linebacker/safety hybrid as Iowa goes with more dime and nickel ooks on defense.

Through it all, Gervase hasn’t budged. It’s not only been what Iowa’s needed, but what’s been expected.

“If we were banking on two things coming into the season, it was that we'd be solid up front … and being solid at that safety position,” Hawkeyes coach Kirk Ferentz said. “Jake has really been good back there. A lot of times I talk about the center having a lot on his plate — free safety, too. A couple things maybe he got nailed on last year because of inexperience, those are things he's now anticipating. He's not making some of those same mistakes. That's a big part of football — anything you do — not making repeat mistakes. That's the benefit of experience. There are some players who are experienced who just don't learn. Jake certainly has done that.

“On top of that, … he's a real active participant in that (leadership) role. He's eager to take ownership back there. The guys look towards him because he’s an elder statesman, if you will.” 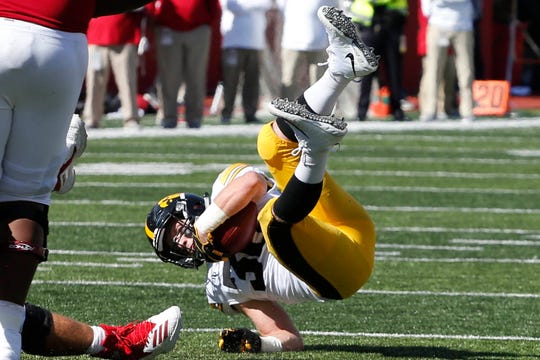 Iowa Hawkeyes defensive back Jake Gervase (30) gets tripped up after intercepting the ball against the Indiana Hoosiers during the fourth quarter at Memorial Stadium. (Photo: Brian Spurlock / USA TODAY Sports)

Then, oh-so-slowly, Gervase started the long climb up the walk-on ladder. Special-teams work dominated the 2015 and 2016 seasons, resulting in six combined tackles over 18 games.

Brandon Snyder’s torn ACL in April 2017 opened the door, and Gervase busted through. He snagged three interceptions in that month’s spring game, helping him eventually crack the starting lineup to begin his redshirt junior season. Gervase briefly lost the lead job during Iowa’s three-game stretch against Penn State, Michigan State and Illinois, but he took back the reins for the final seven contests.

That strong finish spilled into Gervase’s final go-round. He co-leads the team with 40 tackles and has one interception and two pass breakups. Adjusting coverages, barking out defensive signals and calming everyone amid the chaos stand as chief responsibilities.

“I’ve just tried my best to bring younger guys along, make sure everyone in the lineup —whether its linebacker or people in the secondary — are geared up and ready to go for Saturday,” Gervase said. “It’s our job to have trust in one another, have trust in the coaches and understand that we have that next-man-in philosophy. I’ve just tried to do my job back there and have confidence in the guys who are playing with us.”

The insertion of new faces, particularly in the secondary, has accentuated Gervase’s importance. Saturday’s Penn State showdown will likely mark the fourth straight game Iowa will start two freshman cornerbacks in Riley Moss and Julius Brents. Geno Stone, a sophomore safety without much experience, has seen his role grow as well.

Those newbies and others look up to Gervase. When things break down, Iowa’s bearded veteran is there to right the ship.

“He makes most of the checks on the back end when it’s needed, so if I really don’t know something, I go to Jake,” Stone said. “He knows the defense more than me. Jake’s been here for five years, so he knows basically everything.”

Win or lose Saturday, Gervase will almost certainly be in his usual spot next Tuesday, fielding questions and providing quality, articulate answers on the latest Iowa buzz.

He’ll then go about his week preparing for the next challenge, consistent and steady as always.