Stuck in a three-game losing streak that changed the season's narrative entirely, Iowa must find some late-season motivation against two winnable teams.

Iowa head coach Kirk Ferentz discusses the big-picture fork in the road ahead after three losses by a combined 12 points. Hawk Central 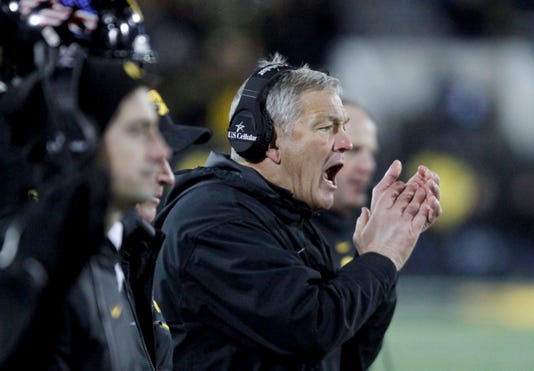 Head coach Kirk Ferentz the Iowa Hawkeyes yells from the sideline during the second half against the Northwestern Wildcats on November 10, 2018 at Kinnick Stadium.(Photo: Matthew Holst, Getty Images)

IOWA CITY, Ia. — Mekhi Sargent stood calmly inside the Iowa football complex lobby, offering up his take on a Hawkeyes football season that’s covered every part of the emotional spectrum.

“We’re writing our own story,” the Iowa running back said. “We can’t be the team that looks back and is like, ‘Man, I wish I could’ve or I wish I would’ve.’”

Given what’s unfolded the past three weeks, the 2018 season will involve plenty of pondering when it officially enters the Hawkeye archives. To what degree, though, is still undetermined.

These next two — at least on paper — should be get-right games before heading into bowl prep. Even though considerable disappointment has filtered through the Iowa program and fan base throughout a three-game losing streak, the scrutiny will only intensify if the Hawkeyes suffer another stumble.

With a nine-win season still salvageable, no one in black and gold wants to see embarrassment piled on top of missed chances when it comes to cementing the 2018 narrative. Consider that among the driving factors as Iowa pushes forward.

“I think it’s a pretty big motivator,” right tackle Tristan Wirfs said. “A nine-win season is still decent, so I think we’re all just trying to go out and get another win.

Given the total investment college football players must make year-round, one can see why most are able to find motivation amid frustration. Too much time, too much effort are involved to suddenly give up Saturdays, even if the loftiest goals are ripped away.

Even so, achieving perfect mental alignment on a roster of 120 is a herculean task, especially given how quickly Iowa's season has shifted — from playoff dreams, then to division-title aspirations, and now to constant questions and drama-filled storylines, all in a month’s time.

Everyone must find his own incentive.

“We prepare, work year-round and prepare all week going in. To lose three games in a row is really tough,” senior defensive end Parker Hesse said. “But it takes mental toughness to put it behind you and realize that nothing you can do now can change that fact.

“You’ve got to stand up right now and say, ‘I’m going to make a change and go out and get this next one.’”

For players such as Hesse and Iowa’s other 11 healthy seniors, one source of motivation is simple. Just 12 quarters remain in their Hawkeye tenures — and for some, their entire football careers.

Visions of a magical last season have faded, but the opportunity to leave one final impact hasn’t. No one wants to conclude on a sour note.

“As a senior, you know you’re coming down to your last few chances,” linebacker Jack Hockaday said. “And the goal is always to win the game and play your best football. That doesn’t change from here on out. Things haven’t gone our way, but our goal moving forward is to just play our best football and win every game we’re playing for the rest of the season.”

Added senior left guard Ross Reynolds: “You work 12 months out of the year. It doesn’t really make sense to give up. This is what you work for all the time. I feel like that’s motivation enough, along with you want to be in the locker room after a game celebrating.”

The Hawkeyes don’t want to see their 2018 story venture down a darker road.