One MAC team and one Mountain West team, both of whom had winning records in 2018, are on the future docket.

The Iowa football program has now rounded out its 2023 football schedule, announcing on Friday the additions of Western Michigan and Utah State to that year's home docket.

Western Michigan will visit Kinnick Stadium for the Sept. 2 season opener in 2023.

The Broncos have hardly been a historic pushover for Iowa, having won two of the three meetings — all coming against current Iowa coach Kirk Ferentz. They beat the Hawkeyes in 2000 and, infamously, in the 2007 season finale that took Iowa out of a bowl game. Iowa returned the favor with a 59-3 rout in 2013.

Western Michigan is a solid Mid-American Conference program that hasn’t had a losing season since that 2013 campaign.

Utah State, meanwhile, will be Iowa’s third opponent in 2023, on Sept. 16. The Aggies are a rising program, having just completed an 11-2 campaign that resulted in a final No. 21 ranking in the Amway Coaches Poll. Iowa is 2-0 all-time vs. Utah State. 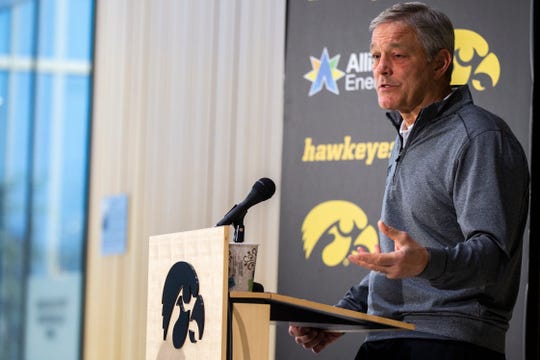 If Kirk Ferentz is still Iowa's coach in 2023 (he is under contract through the 2025 season), he would be 68 years old. (Photo: Joseph Cress/Iowa City Press-Citizen)

Iowa is under contract to play Iowa State through 2023, plus nine-game Big Ten Conference schedules. That’s already 10 Power Five opponents on a 12-game schedule. The scheduling philosophy under Ferentz has been to add two non-Power Five opponents, as well, and now those are nearly set for the next five seasons. Only one opening, in 2022, remains.

The non-Power Five future opponents are Miami of Ohio and Middle Tennessee State in 2019; Northern Iowa and Northern Illinois in 2020; Kent State and Colorado State in 2021; and South Dakota State in 2022.