Nick Easley has gone from junior-college walk-on to an NFL roster. The wide receiver headlines a list of outgoing Iowa seniors to find an NFL home.

Once the NFL draft ends, the flurry begins for undrafted free agents. And several draft-eligible Iowa Hawkeyes were snapped up quickly Saturday night.

And there may be no better story than Nick Easley’s.

A junior-college walk-on whose only college interest out of Newton High School was as a Division II punter was signing a priority free-agent deal with the NFL’s Buffalo Bills. His brother, Matt, confirmed the deal to the Des Moines Register. 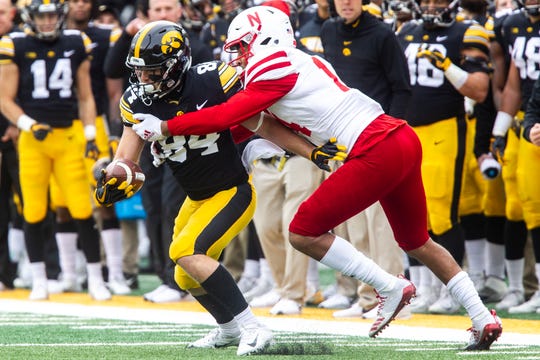 Nick Easley, left, racked up 52 catches for 494 yards in his senior year with the Hawkeyes, often proving to be a clutch option on third down. (Photo: Joseph Cress/Iowa City Press-Citizen)

And it’s quite a fit. The Bills didn’t choose a wide receiver among the eight players they drafted. Easley (5-foot-11, 203 pounds) should have an excellent chance to make the 53-man roster as a slot receiver.

Easley, who owns Iowa's program record in the pro-agility drill, at 3.77 seconds, exhibited fantastic route running, reliable hands and toughness while leading Iowa in catches in each of the past two seasons (with 103 total) after transferring as a walk-on from Iowa Western Community College.

A weight-room fanatic, Easley was the Outback Bowl MVP of Iowa’s 27-22 win against Mississippi State. He caught eight balls for 104 yards and two touchdowns against the nation’s No. 1 defense.

Interestingly, Easley’s Iowa debut came against Bills starting quarterback Josh Allen. He had four catches for 77 yards and a touchdown in that 24-3 win against Wyoming on Sept. 2, 2017. According to the Houston Chronicle, Easley is receiving a $13,000 signing bonus.

Other Hawkeyes who have latched onto NFL teams…

Ross Reynolds just hit 225 for 27 reps on the bench pic.twitter.com/9mKxo22ugl

Offensive lineman Ross Reynolds (6-2½, 304) was signing with the San Francisco 49ers as a priority free agent, the Register confirmed. Reynolds was Iowa’s top-graded run blocker in the 2018 season and plays with a nasty streak.

We have ourselves a Detroit Lion!!! pic.twitter.com/BPliLL1juh

And how about this? Matt Nelson, a four-year defensive lineman at Iowa, is signing with the Detroit Lions as a developmental offensive lineman, the Register confirmed. He's certainly got the size (6-7, 296) and the athleticism, as a former Division I basketball prospect, to become a capable offensive lineman at the next level. The question is how much time he'll have to make the transition.

Nelson played two seasons as a defensive end and two as an oversized defensive tackle for the Hawkeyes. A gritty, selfless player, Nelson will be joining Iowa teammate T.J. Hockenson (the No. 8 overall pick in the draft) in Detroit.

Can’t wait to get started in Philadelphia!! Fly Eagles Fly 🦅

Offensive lineman Keegan Render posted on Instagram that he was signing with the Philadelphia Eagles. Render (6-3, 305) brings position flexibility to the next level. He was a starter at guard in the 2017 season, then became Iowa's No. 1 center in 2018.

Four-year starting defensive end Parker Hesse will have tryouts with the Kansas City Chiefs and Detroit in the next two weeks, he told the Register. Among others landing tryouts were safety Jake Gervase (Oakland Raiders) and defensive tackle Sam Brincks (Green Bay Packers).