Larry the Cable Guy on Nebraska football: We're not the guy who's 'got two broken legs' anymore

Following a late surge to end favorite son Scott Frost's first season in Lincoln, there's no wavering in his mind about the Huskers' football future.

Larry the Cable Guy on Nebraska football: We're not the guy who's 'got two broken legs' anymore

Dan Whitney, better known as comedian Larry the Cable Guy and a Nebraska native, played a round of golf with new Nebraska basketball coach Fred Hoiberg on Wednesday. Hawk Central

That, after the 2018 season, the Hawkeyes' recent run of dominance over the Cornhuskers would be coming to an end.

Following a late surge to end favorite son Scott Frost's first season in Lincoln, there's no wavering in his mind heading into this fall.

"We've got our legs back," he said, finishing with a laugh after his shortened Principal Charity Classic Pro-Am round Wednesday with new Nebraska basketball coach (and Iowa State favorite son) Fred Hoiberg. 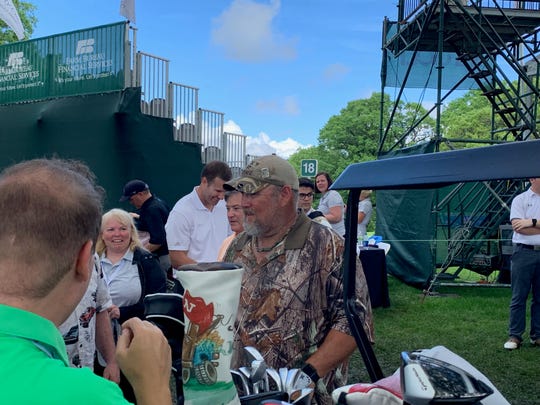 "Everybody doesn’t like Nebraska because we had beaten everybody in football all the time. Now we’re down 17 years, so it’s kind of like the guy that used to beat everybody and now he’s got two broken legs and everybody’s taking a chance beating on him while they can."

Nebraska won four of its final six games after losing its first six to send a wave of optimism about the former Central Florida coach's chops in the Big Ten West. Those two defeats were both against top-25 opponents — by five on the road at Ohio State and by three on a last-second field goal at Kinnick Stadium after erasing a two-score, fourth-quarter deficit.

Whitney is also optimistic about Nebraska men's basketball, a program that is somehow without an NCAA Tournament win to their credit.

"Everybody’s excited with Fred. Fred’s a great coach, and respected everywhere in college and in the NBA," he said. "He got a raw deal with the Chicago Bulls. He goes to the Bulls, and they get rid of all their players … So hey, we’re excited. He’s got some good recruits coming in.

And stay calm, state-of-Iowa sports fans: He and an entire state may be rooting against you, but it's just sports.

Although for 3½ hours or so come this Black Friday, no promises.

The former Iowa State coach and current man in charge of Nebraska men's basketball was in Des Moines for a pro-am day at the Principal Charity Classic. Des Moines Register