Just like that, more than half of Iowa's 2019 football schedule has been assigned kickoff times.

For the first time in 12 years, Iowa’s home football opener will be played under the lights.

The university announced kickoff times for seven of the 2019 Hawkeyes’ 12 regular-season games on Thursday. And it’ll all begin with a 6:30 p.m. matchup against Miami of Ohio on Aug. 31 at Kinnick Stadium.

The last time Iowa’s first home game was played at night was in Week 2 of the 2007 season, against Syracuse. The Hawkeyes opened that year against Northern Illinois at Soldier Field in Chicago. 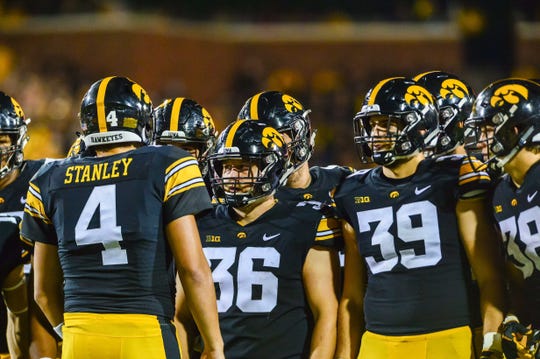 Some other notes about the Hawkeyes’ Thursday-announced kick times:

The Cy-Hawk matchup is at 3 p.m. in Ames on Sept. 14, an across-the-board win for everybody.

The Iowa athletics department has long said feedback is overwhelmingly favorable for mid-afternoon kick times — giving fans from across the state time to commute and get home without having to worry about overnight accommodations. Plus, those 2:30 and 3 p.m. kickoffs allow an ideal amount of time for pregame tailgating.

The Iowa-Iowa State game, which will air on Fox Sports 1, hits that sweet spot for both feverish fan bases. It should be a fun, festive day. (Iowa State, by the way, is an early 2-point favorite.)

That includes the earlier-than-usual Big Ten Conference opener against Rutgers, on Sept. 7 at Kinnick, as well as Iowa's Oct. 19 Homecoming game against Purdue.

The Hawkeyes' road trips to Michigan (Oct. 5) and Northwestern (Oct. 26) are also morning kickoffs and Homecoming games for those schools.

There’s time for (some) Black Friday shopping before the Iowa-Nebraska game.

The Hawkeyes and Cornhuskers will close their regular seasons at 1:30 p.m. on Nov. 29 at Memorial Stadium in Lincoln. And in a new twist, Big Ten Network will televise the game. This has typically been an ABC or Fox broadcast.

There’s a decent chance that, for the first time since these teams have become conference rivals in 2011, this matchup could decide a Big Ten divisional title. Iowa and Nebraska are expected to be among the favorites in a wide-open Big Ten West race in 2019.