San Francisco 49ers tight end George Kittle says it's what he does on the plays where the ball doesn't come his way that are most gratifying.

SportsPulse: Every year there's roughly 50% turnover in playoff teams. Trysta Krick predicts 6 teams that will be in and out of the playoffs as well as who's winning it all in Miami. USA TODAY

SANTA CLARA, Calif. — No tight end has ever been as prolific with the ball in his hands as George Kittle was for the San Francisco 49ers last season when he used his speed and ability to run after the catch to record the most yards receiving ever in a season for a tight end.

But for Kittle, who lasted until the fifth round in the 2017 draft after being mostly as a blocker at college in Iowa, it's what he does on the plays where the ball doesn't come his way that are most gratifying.

"I think I've said it a bunch of times, there's nothing better than to move a man from point A to point B against his will," he said. "And so when you do that, and you can do it multiple times, it's a blast. So there are things that I don't think I'll ever let go away from me. The run game is something I take a lot of pride, because it's a way to separate yourself from other people."

Kittle separates himself both as a blocker and receiver. He also had 88 catches for 1,377 yards and five TDs as a receiver, breaking the single-season record for receiving yards by a tight end that Kansas City's Travis Kelce had eclipsed earlier on the final day of last season. Rob Gronkowski had held the record of 1,327 yards in 2011 before being passed by Kelce and Kittle. 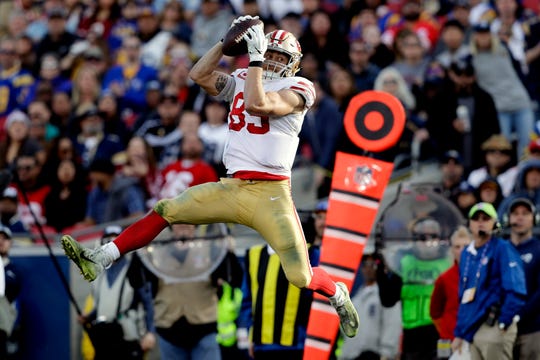 Kittle also graded out as one of the best blockers at the position and was a key part on San Francisco's running game, although his coach doesn't quite believe his star player enjoys that aspect the best.

Kittle is a perfect fit in Shanahan's offense, where receivers often get schemed open in space where they can make plays after the catch. Kittle gained 870 of his yards after the catch, the most in the NFL since SportRadar began tracking that stat in 2010, even eclipsing running backs who make many of their receptions closer to the line of scrimmage.

Kittle showed little of those skills in college when he was used mostly as a blocker. He caught just 48 passes for 737 yards in 25 games at Iowa, leading to questions about whether he could be a dual-threat tight end in the pros and contributing to his lasting until the fifth round of the draft. Iowa senior George Kittle celebrates with the Heroes Trophy after beating Nebraska, 40-10. Kittle had two short TD receptions in the game despite playing through a mid-foot sprain that limited him in the second half of the football season. David Scrivner, Iowa City Press-Citizen
Fullscreen 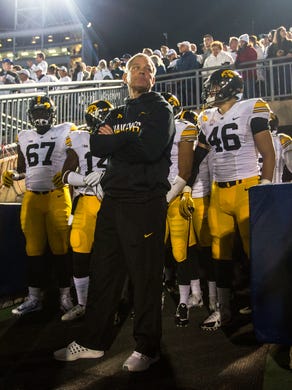 Iowa coach Kirk Ferentz leads his players out of the tunnel at Penn State on Nov. 5. Pictured are three Hawkeyes expected to be drafted in the first four rounds in Jaleel Johnson (67), Desmond King (14) and George Kittle (46). Special to the Register
Fullscreen 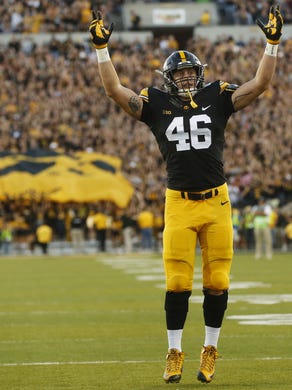 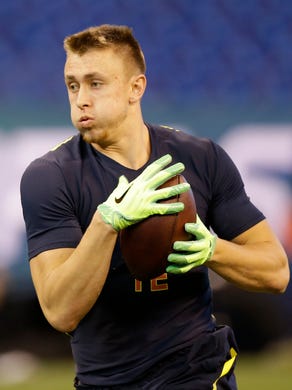 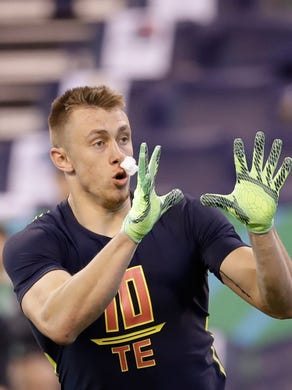 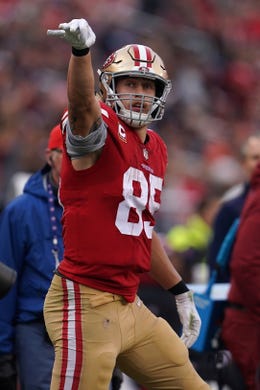 Iowa wide receiver George Kittle (46) runs the ball as he breaks away from the North Dakota State defense Saturday, Sept. 17, 2016 during the Hawkeyes game against the Bison at Kinnick Stadium in Iowa City. Michael Zamora/The Register
Fullscreen 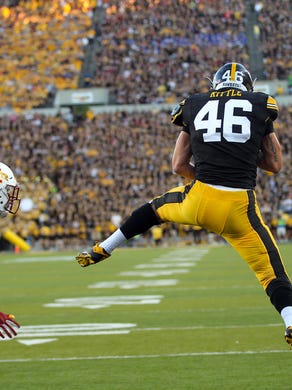 Iowa's George Kittle (46) and Greg Mabin (13) get set to come out of the Beaver Stadium tunnel on Nov. 5. That was the last time either has played for the Hawkeyes; on Tuesday, each discussed their injury situation. Special to the Register
Fullscreen 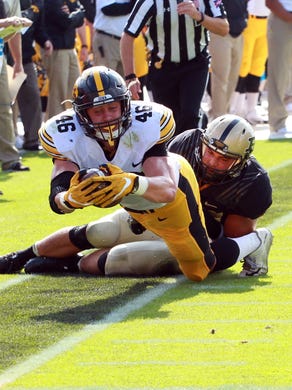 This is the first-quarter play in which Iowa tight end George Kittle was injured during the Oct. 15 win at Purdue. Brian Spurlock, USA TODAY Sports
Fullscreen 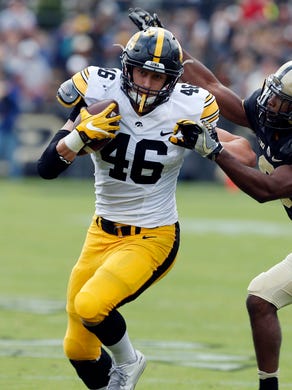 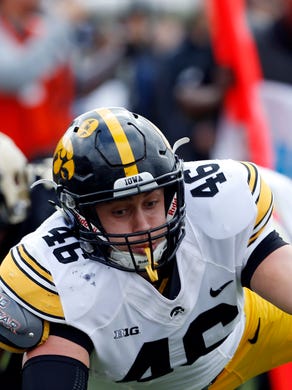 George Kittle lunges for the end zone for a 22-yard gain during the first quarter of Iowa's win Saturday at Purdue. Kittle earlier this week was named to the midseason watch list for the Mackey Award, given to the nation's top tight end. Brian Spurlock, USA TODAY Sports
Fullscreen 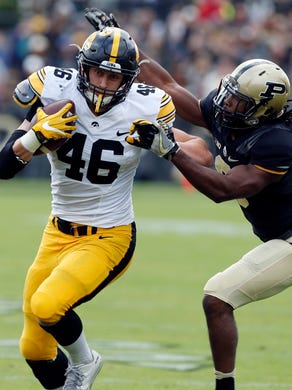 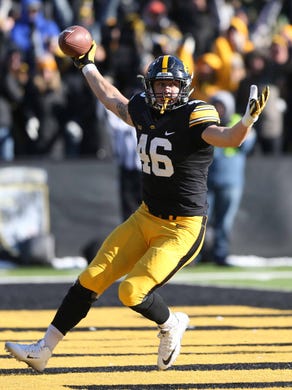 Iowa's George Kittle glances back as he runs in for a 35-yard touchdown during the Hawkeyes' game against Purdue at Kinnick Stadium on Saturday, Nov. 21, 2015. David Scrivner / Iowa City Press
Fullscreen

SANTA CLARA, CA - DECEMBER 16: George Kittle #85 of the San Francisco 49ers is tackled by Tedric Thompson #33 of the Seattle Seahawks after a catch during their NFL game at Levi's Stadium on December 16, 2018 in Santa Clara, California. (Photo by Ezra Shaw/Getty Images) Getty Images
Fullscreen 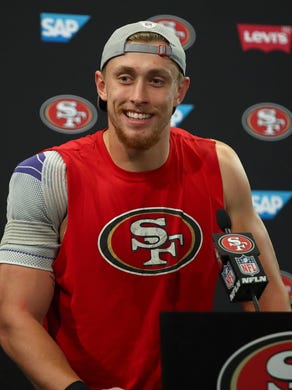 FILE - In this Nov. 1, 2018, file photo, San Francisco 49ers tight end George Kittle speaks at a news conference after an NFL football game against the Oakland Raiders in Santa Clara, Calif. Now heading into the final game of the season, Kittle is in a battle with Kansas City's Travis Kelce in a race for the most productive season ever for a tight end. (AP Photo/Ben Margot, File) The Associated Press
Fullscreen
San Francisco 49ers tight end George Kittle holds off Los Angeles Rams cornerback Marcus Peters during the second quarter at Levi's Stadium. Kelley L Cox, USA TODAY Sports
Fullscreen 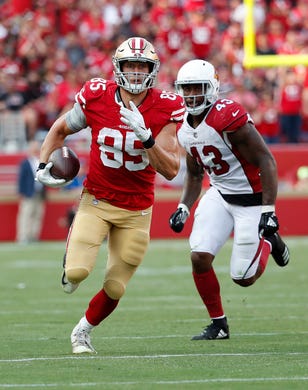 But he showed flashes as a rookie with 43 catches for 515 yards and then burst into stardom last season, despite playing the second half of the season with fractured rib cartilage.

Kittle turned that success on the field to opportunities off it, whether it was going to wrestling events, taking part in a promotional tour to Canada or filming commercials.

"I'm just a happy guy," he said. "I'm 25 years old and I'm doing what I dreamed of doing when I was a kid. It's hard for me ever to be upset. Losing is not fun, but the fact that I get to play football and that's my job makes it easy for me to get out of bed every day."

But Kittle knows the off-field opportunities are secondary to what he does on the field.

His teammates have no fear that success will go to Kittle's head. He remains one of the hardest workers and his love of doing the little things like sealing the edge as a blocker or drawing coverage that creates open space for other receivers make him one of the more popular players on the team.

"You see his mindset," receiver Marquise Goodwin said. "He's just an all-around great dude. ... He's not worried about getting the ball. He's worried about getting open and being productive for the team. He has the right mindset. That's why he's blessed with that opportunity. I can't say enough good things about him. I can't wait to see what he can do for this team."

Arguably the greatest tight end in Iowa history, Dallas Clark (1999-2002) won the John Mackey Award in 2002 as the nation's top tight end and was a first-round draft choice of the Indianapolis Colts. A native of Bode, Iowa, Clark retired from professional football in 2013 after amassing 505 receptions for 5,665 yards and 53 touchdowns. He won a Super Bowl with the Colts in 2007. PHOTO BY HARRY BAUMERT.
Fullscreen

Kyle Trippeer (1996-2000) was one of the earliest tight ends to play for Kirk Ferentz when he was hired as head coach ahead of the 1999 season. Trippeer is pictured here congratulating Tavian Banks after he scored a touchdown on Sept. 20, 1997, against Iowa State. David Peterson/The Register
Fullscreen 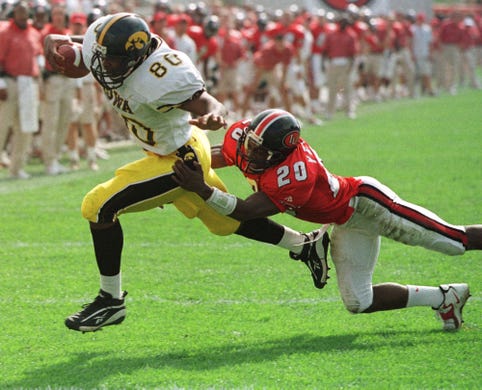 Zeron Flemister (1996-1999) is pictured scoring on a 14-yard pass from Randy Reiners in an Oct. 17, 1998 game against Indiana. The touchdown was the only one of FLemister's Hawkeye career. He went on to play in the NFL with the Washington Redskins and Oakland Raiders before retiring in 2000 with 38 career receptions and four touchdowns. Michael Conroy/The Register
Fullscreen 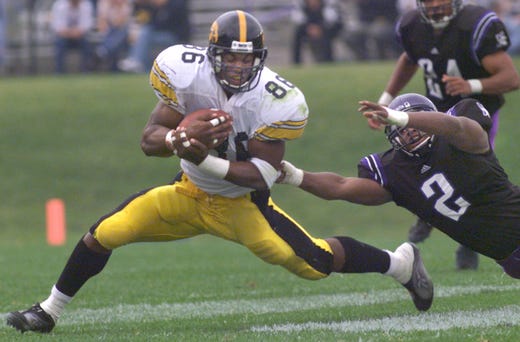 Austin Wheatley (1995-1999) is pictured hauling in an 11-yard pass from Randy Reiners in an Oct. 16, 1999, game at Northwestern. As a senior, Wheatley caught nine passes for 103 yards. He was drafted in 2000 by the New Orleans Saints and played in the NFL until 2002. Harry Baumert/The Register
Fullscreen

Mike Follett was a former West Des Moines Valley standout who played for the Hawkeyes during Kirk Ferentz's early years. Follett is pictured trying to haul in a pass during a Sept. 6, 2003, game against Buffalo at Kinnick Stadium. Matthew Holst/Iowa City Press-Citizen
Fullscreen

Champ Davis (2003-2007) finished his career at Iowa with 19 receptions for 141 yards and a touchdown. Deb Barber/Iowa City Press-Citizen
Fullscreen 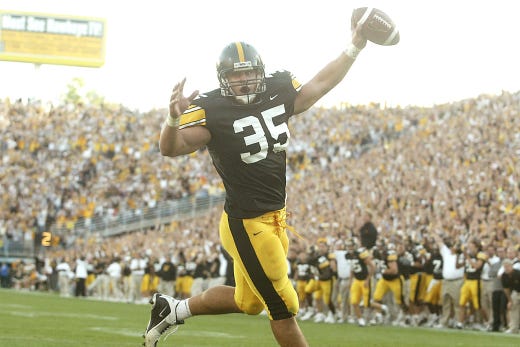 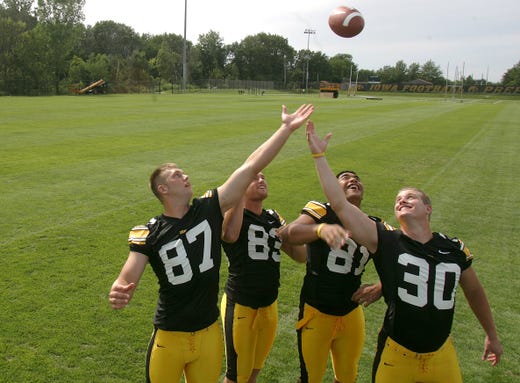 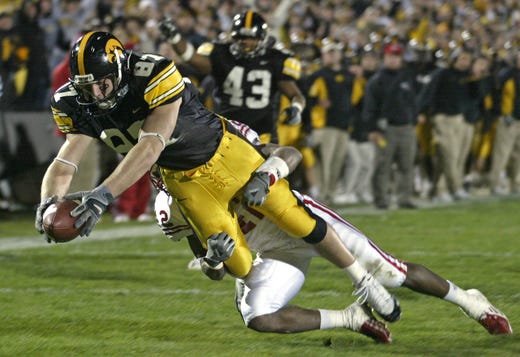 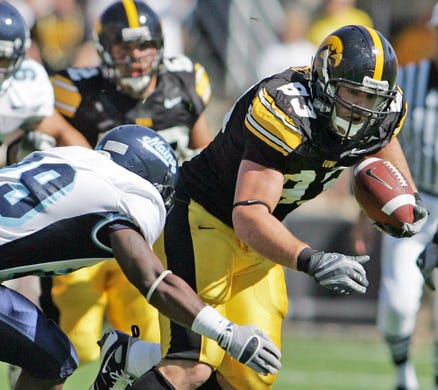 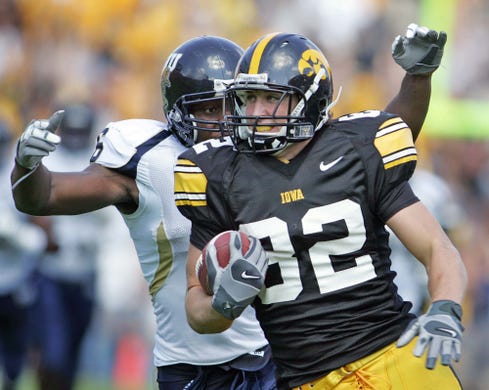 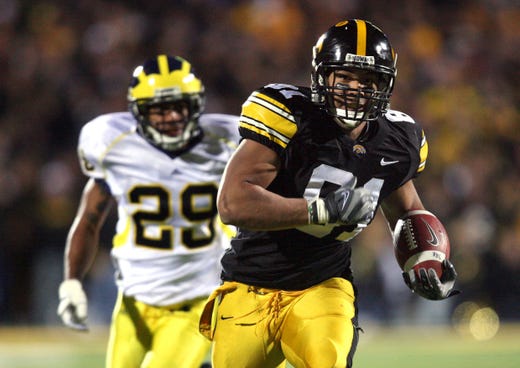 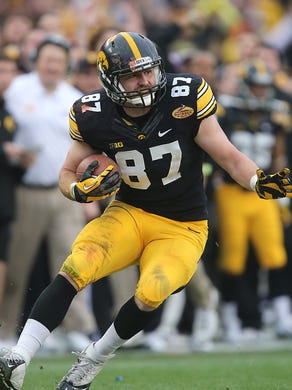 Jake Duzey is shown during the Outback Bowl on Jan. 1, 2014. His last full game was Jan. 2, 2015, in the TaxSlayer Bowl. The former Iowa tight end missed most of his senior season, save a few snaps, with recovering from surgery to repair a torn patellar tendon in his left knee. Bryon Houlgrave, The Register
Fullscreen

Iowa wide receiver George Kittle (46) runs the ball as he breaks away from the North Dakota State defense Saturday, Sept. 17, 2016 during the Hawkeyes game against the Bison at Kinnick Stadium in Iowa City. Michael Zamora/The Register
Fullscreen 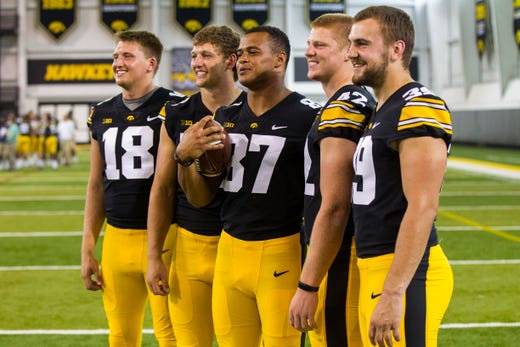 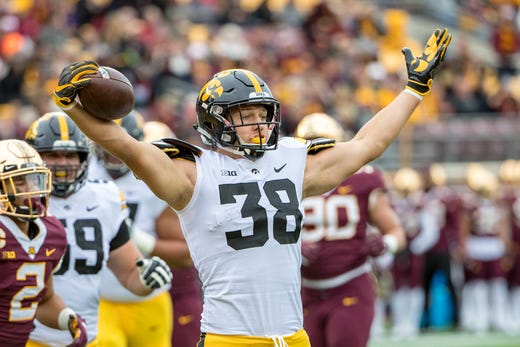 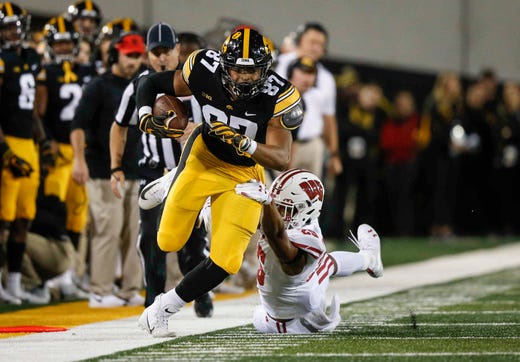 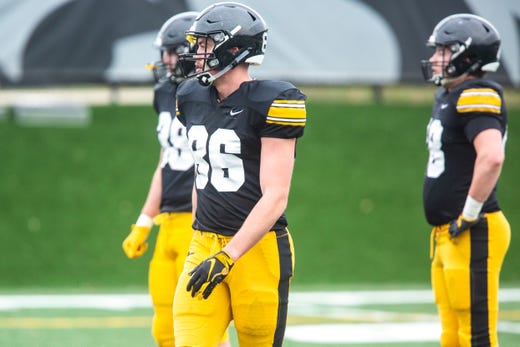 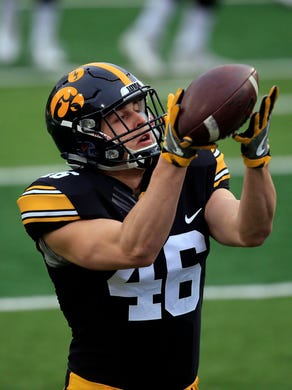 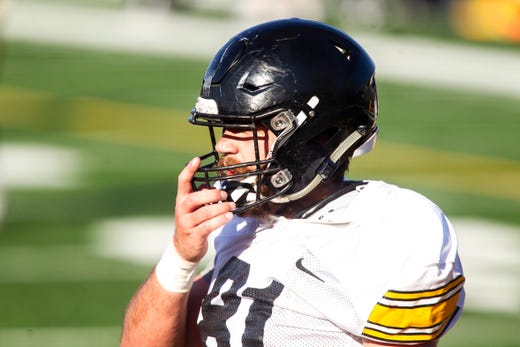 Senior Tight End Drew Cook leads a pack of campers to a drill during a spring camp on Saturday, May 4, 2019, in Johnston. Brian Powers/The Register
Fullscreen