Kirk Ferentz said maturity is the biggest key to winning on the road. Iowa has a huge test Saturday. That and more from Tuesday's press conference.

IOWA CITY, Ia. — As much that is established with Iowa's 2019 team, this unit hasn't had a road test yet. That will change Saturday in a raucous environment.

In all of Kirk Ferentz's years, thriving away from Kinnick Stadium has come down to a simple virtue:

"The ability to really focus in on what counts and ignore the rest of it," Ferentz said at Tuesday's press conference when asked what comes down to succeeding on the road. "There's going to be a lot of rest-of-it." 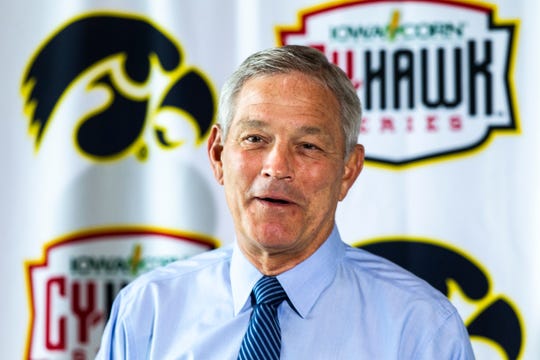 This year's Cy-Hawk matchup carries added elements than years prior. The annual Iowa-Iowa State showdown always garners in-state attention. But with one team ranked and the other just outside the poll — along with "College Gameday's" first-ever trip to Ames — there's a national feel to the 2019 edition.

"The game on the field is really important to everyone involved," Ferentz said. "... When we win, it's a really good thing. When we lose, it's awful."

Ferentz said he doesn't anticipate GameDay's presence to affect the outcome. ESPN's premier college football show last visited the state of Iowa in 2006, when the No. 13 Hawkeyes hosted top-ranked Ohio State. The buzz vanished quickly as the Buckeyes rolled, 38-17.

"He's given them a great boost," Ferentz said.

On the injury front, free safety Kaevon Merriweather (sprained foot) is out as expected. Offensive lineman Cole Banwart, who dressed against Rutgers but didn't play, should be rotated in on Saturday.