Iowa's secondary has taken hit after hit in the early going. Veterans Michael Ojemudia and Geno Stone have helped the Hawkeyes survive on the backend.

Iowa coach Kirk Ferentz is within a win over Middle Tennessee State of finishing September with an undefeated record. Hawk Central

IOWA CITY, Ia. — The secondary losses have piled up week by week, leaving the Hawkeyes with questions and depth issues as Big Ten Conference play looms. Iowa’s two most veteran defensive backs have handled the shuffling as best they could. 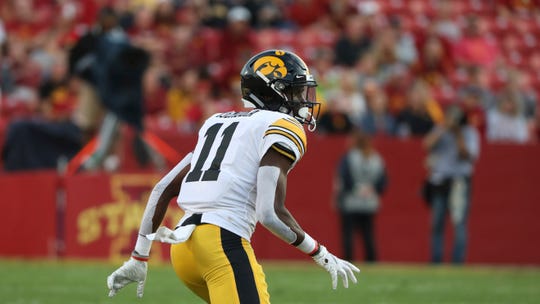 Much was expected from Michael Ojemudia and Geno Stone, anyway. But their leadership and assertiveness have only been amplified, given the Hawkeyes’ back-end status. Those two are the only secondary starters still standing in their Week 1 role, as No. 14 Iowa (3-0) readies for its final nonconference test against Middle Tennessee State at 11 a.m. Saturday.

“It’s really been OJ and me staying on the younger guys, telling them that when they go out there and compete, they’re here for a reason,” Stone said. “I’m just happy that everyone is out there competing, not giving up that many big plays. We’ve given up a few, but everyone locking down at the end of games has helped us a lot.

A quick injury rundown, for those who’ve lost track:

With some concern in his voice, Kirk Ferentz provided little clarity on when that quartet may return. It won’t be Saturday, even after a well-timed bye week. Perhaps at least one piece is back when Iowa travels to Michigan on Oct. 5. Which one, though, firmly remains to be determined.

The Hawkeyes will lean on who they have for now.

“During the season, crazy things happen,” Ojemudia said. “So when we get our older dudes and more experienced dudes back, that’ll be even better. But having depth in the back end is definitely a plus.”

Still, the secondary depletion hasn’t caused massive problems the way many anticipated. Iowa State burned the Hawkeyes on two emphatic touchdowns, covering 51 and 73 yards, respectively, on Sept. 14. Remove those, though, and Iowa barely surrendered 200 yards through the air. That total will work, given the current situation.

Credit Ojemudia and Stone for aiding the transitions. Both have had inexperienced players slide in alongside: walk-on Jack Koerner next to Stone at free safety, and redshirt freshman D.J. Johnson opposite Ojemudia at the other corner spot.

Numerous teams couldn’t sustain such a blow to one area and keep pushing. Iowa’s two healthy veterans have made it work.

“That's part of their role,” Ferentz said. “Help the younger guys come along and better understand the tempo we need — the things you need to do on the practice field and in meetings — those type of things. Good teams function that way.

“… Certainly, Geno and OJ have done a really good job. They are both veteran guys. They play with some confidence, and they are also good about sharing their expertise, their knowledge with their teammates. We are going to have injuries every year. It's not a new phenomenon. You deal with it and keep moving.” 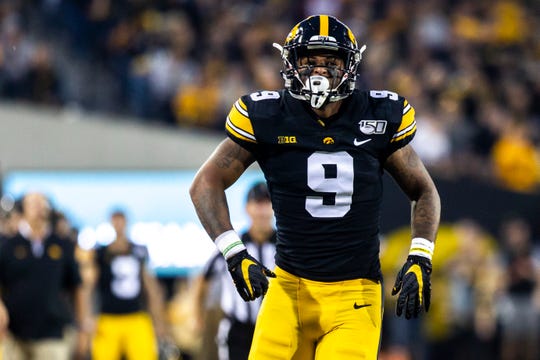 Aside from the season’s first quarter, the Hawkeyes have tabled their 4-2-5 look that garnered headlines last year and throughout the offseason. Johnson, who opened as Iowa’s starting “cash” defensive back, has since slid in for Hankins, leaving little trust in anyone still standing.

Even if just one more corner was healthy, the Hawkeyes likely would’ve went 4-2-5 in sporadic situations.

“I feel like my leadership has improved a lot, just telling the younger guys to be ready and talking to coach (Phil) Parker about who should be in the game. Really just telling everyone how I feel being out there, what coverage we should be in. Just helping everyone get in the right situation.”

Injuries unfold regularly in this grueling game, yet rarely does one position group feel this much pain this early in the year.

Point to Ojemudia and Stone if the Hawkeyes ultimately survive this secondary conundrum.