The Iowa defense will need to bring the noise again against a vaunted Nittany Lions offense. That and more from Kirk Ferentz's Penn State presser.

IOWA CITY, Ia. — It got overshadowed by the final result, but Iowa's defense delivered a solid performance in the Hawkeyes' 10-3 loss at Michigan. It'll need to spill that confidence into Saturday with a heftier challenge on deck. 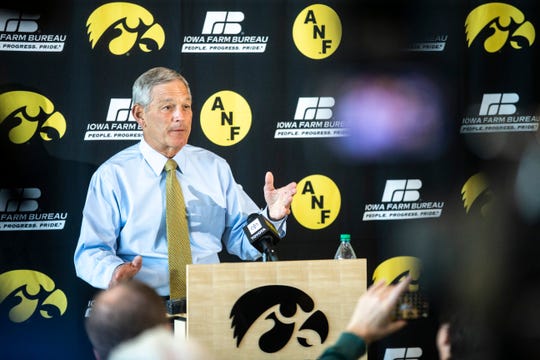 The Nittany Lions rank fifth nationally in scoring offense (50 points per game), 16th in passing offense (316) and 14th in total offense (509.5) through five games. Penn State tussled with Pittsburgh in a 17-10 win, but no other game has been closer than 28 points.

"They've always been able to recruit really well," Ferentz said. "... I can't think of a reason why Penn State wouldn't be good."

The Nittany Lions are doing it with new pieces, at least to the Hawkeyes. Iowa has felt the wrath of Saquon Barkely, Trace McSorley and Miles Sanders in recent challenges. Those weapons have moved on, but Penn State has kept on rolling under the direction of quarterback Sean Clifford.

Clifford ranks 21st nationally and second in the Big Ten in passing yardage. He has 12 touchdowns to just two interceptions.

"It just seems like things are going right along," Ferentz said. "That what's you want in a quarterback."