IOWA CITY, Ia. — Tristan Wirfs had frustration painted on his face following Iowa's 17-12 loss to Penn State. He was candid as he spoke with the media after the Hawkeyes' second straight poor performance on the ground.

A reporter asked: What do you think is missing in the run game?

"I couldn't tell you," Wirfs said with an exasperated honesty. "It could be a lot of things."

That was a common theme among the Hawkeyes during postgame interviews: There aren't any easy fixes for an uncharacteristically sputtering ground attack.

But, with two straight losses and fading Big Ten title hopes, it needs to be fixed. 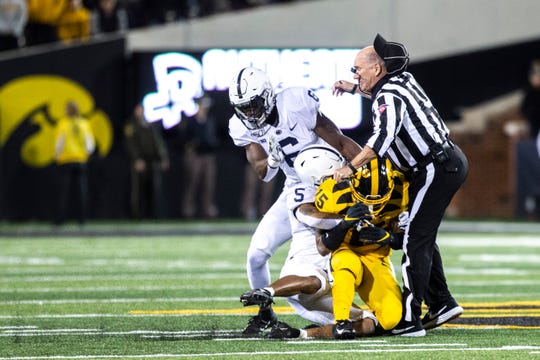 Iowa mustered 70 yards on 30 rushes against the Nittany Lions, coming out to 2.3 yards per carry. Last week, against Michigan, the Hawkeyes netted only 1 yard on 30 carries. Take out Nate Stanley's eight sacks for minus-65 yards and Iowa's running backs still gained only 66 yards on 22 carries.

Wirfs and Mark Kallenberger, who got his first career start at right guard, both shouldered much of the blame on behalf of the offensive line.

"I know all of us aren't happy. It stings," Wirfs said. " ... It’s a big thing for us, establishing the run game. I think it’s kind of like a snowball: Once we get the run going, everything else kind of goes. And that’s how it is for the o-line. If we’re rolling, everybody else is rolling, too. So it’s on us to come out and set the tone and get the run game going.

"And we didn't do that today."

Toren Young said the running backs must be more disciplined. Tyler Goodson led with 42 yards on eight carries, although 29 of those yards came on one run. Young added 26 yards on seven carries and Mekhi Sargent had 19 yards on nine attempts.

"Are our tracks where they need to be? Are we reading the right keys? Are we seeing where the safeties and backers are playing?" Young said. "Small details. We showed, in both games, that we can run the ball at times. It just comes down to small details."

While not satisfied with his team's execution, Kirk Ferentz showed faith in his ground attack during his postgame press conference. He was quick to point out that Iowa has played two of the country's best defenses in these past two weeks.

Still, even against stout defenses, Iowa's numbers from the past two weeks aren't what we're used to seeing from a run-first group whose offensive line and running backs can usually battle toe-to-toe with the country's best defensive fronts.

These past two weeks most closely resemble Iowa's performance in its 14-10 loss last season to Northwestern, when it gained 64 yards on 22 carries for 2.9 per carry.

"Really, no magic formula to it. It's a matter of executing a little bit better, doing some things that are going to be helpful. Field position could help us, too. We didn't benefit from that very much tonight. Some of that was self-inflicted, some of it by their punter, too, special teams. We just have to find a way to get over the hump here a little bit."

Kirk Ferentz knows the offense needs to score more points after back-to-back losses by scores of 10-3 and 17-12. Hawk Central

One thing that could help Iowa's ground attack? More time for the offensive line to adjust to life without Cole Banwart. With Banwart gone for the season, Kallenberger became the fourth Hawkeye to start at right guard this fall. Redshirt freshmen Cody Ince and Jack Plumb also rotated in against Penn State.

"It doesn't help. It makes it a little bit of a challenge," Ferentz said of his shuffling offensive line. "We'll just keep pushing forward. I think we have enough to win with; we just have to get a little bit better with our execution."

Iowa's schedule briefly lightens up over the next two weeks: Purdue's rush defense ranks 79th in the country and Northwestern's is 53rd. Those games could provide bounce-back opportunities. But after that, the Hawkeyes again face high-level defenses in Wisconsin and Minnesota — must-win games for their conference title hopes.

► More Sunday: Leistikow: Only one way left for Hawkeyes to prove they're a really good football team

Wisconsin has the country's No. 1 rush defense, allowing just 44.7 yards per game. Minnesota is No. 36 in the country, with 119.8 yards allowed per game.

"It’s a little frustrating when the run isn't working, especially (because) we have a lot of guys that are good with the run," Kallenberger said. "We have a lot of returners. It’s frustrating, definitely. But we’ll come back next week, work in it throughout practice and fix up what we need to."