Starting linebacker Kristian Welch is out against Purdue. Look for two in-state products to help mask his absence.

Kirk Ferentz hits on several angles of his offensive line that allowed 10 sacks and was held to 71 rushing yards in losses to Michigan and Penn State. Hawk Central

IOWA CITY, Ia. — Iowa got a wave of injured players back last week against Penn State, but the Hawkeyes will be without a key piece Saturday afternoon. 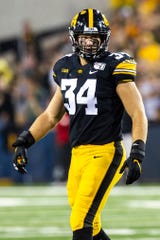 Linebacker Kristian Welch will miss the 11 a.m. game against Purdue after getting "nicked up" against the Nittany Lions. Welch wasn't dressed pregame and didn't go through warmups.

Iowa coach Kirk Ferentz was optimistic earlier in the week that Welch would return, even naming him a captain and saying "we expect him to play." But that tone changed Saturday morning. It's clear Welch didn't progress the way Iowa thought he might this week.

Iowa City West product Dillon Doyle finished the Penn State game in Welch's place — and Ferentz indicated in his pregame report that Doyle will see extensive action again. Pregame warmups showed Doyle will likely get the start. Another in-state face could help fill in as well.

"I'm not sure Kristian will be able to go. But Dillon finished the game Saturday, and he'll be in there," Ferentz said. And also Jack Campbell will get a chance to work too if Kristian can't go."