Keith Duncan's body of work shows that he deserves to be among the three finalists for the Lou Groza Award.

As for Keith Duncan, the guy that’s actually going to attempt the kick?

“I don’t even know where Keith is,” Woods said, “before his kicks.”

And that’s by design. 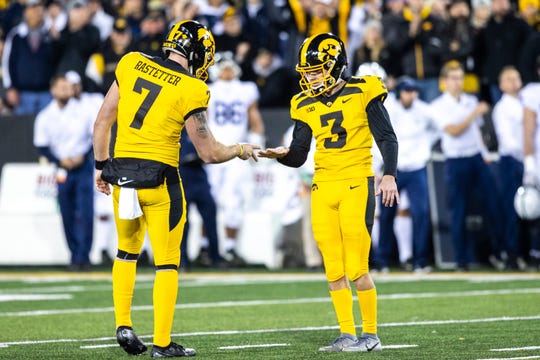 Junior kicker Keith Duncan (3) has converted 22 of 25 field-goal attempts this season and has made a routine out of playing rock-paper-scissors with holder Colten Rastetter after makes. (Photo: Joseph Cress/Iowa City Press-Citizen)

Now in his third season as a full-timer with Iowa’s special teams, Woods explained on his Wednesday appearance on Hawk Central radio (on KxNO in Des Moines) that his specialists are passionately into the mental side of football. He doesn't want to disrupt their routines.

“(Kickers) don’t need me giving them any pep talks or anything,” Woods said. “Those guys are ready to go. As I call them, they’re trained killers; trained assassins. They know what they’re doing.”

Whatever Duncan is doing without Woods seeing him … it’s working.

The junior walk-on has arguably been the best placekicker in college football this season. His 22 field goals ties him with East Carolina’s Jake Verity (who has played 10 games, to Duncan’s nine) for the most in FBS. Duncan’s 22 successes already is a single-season Iowa record.

Up next: How about a Big Ten Conference record?

Duncan needs just three successful field goals — something he’s done four times this season in one game — to tie three kickers for the most in a Big Ten season. Iowa (6-3) has three regular-season games, plus a bowl, to go.

Duncan’s 22-for-25 success rate (88%) is even more impressive when you consider he has done so in less-than-ideal conditions. He went 4-for-4 on a rain-soaked field to deliver a clutch 18-17 win at Iowa State. He punched a 47-yarder against Penn State through a 20 mph wind. He went 2-for-3 on a wet, windy day at Northwestern. Of the five FBS kickers with 19 or more field goals this season, he’s the only one in the Midwest.

“He has his own routine that he goes through,” Woods said. “A lot of that has come through a lot of hard work and preparation. He spends a tremendous amount of time, as all our specialists do, on the mental side of football: visualizing things before they happen, so that they’re not surprised.”

Duncan is one of 20 semifinalists for the Lou Groza Award, given to the top kicker in college football. He is certainly deserving of being among the three finalists that will likely be announced a few days before Thanksgiving.

Woods told the amusing story of watching film and noticing that Duncan and Rastetter were playing rock-paper-scissors after successful field goals or PATs. Everyone notices that now.

Most field goals in a Big Ten season