Illinois' defense will gamble. They'll go for interceptions, they'll chop at the ball. Avoid turnovers, and you can burn them.

IOWA CITY, Ia. — If you’ve got a defense that can take the ball away, you’re never out of the game.

If you’ve got a defense that can score, even better.

Illinois’ football revival has centered around Lovie Smith’s signature ball-hawking defense that has turned the Fighting Illini into the Believing Illini. That’s the biggest difference between the Illinois team that was thrashed a year ago by Iowa, 63-0, and the one that’s marching into Kinnick Stadium on Saturday with a four-game winning streak. 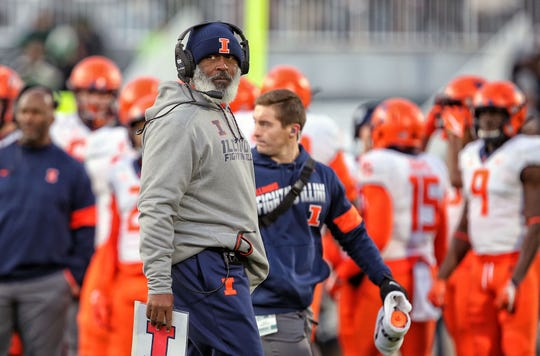 Lovie Smith's Illinois defense has generated a national-best 26 turnovers from opponents, a trait he mastered as a defensive guru for the St. Louis Rams and Chicago Bears. (Photo: Mike Carter, USA TODAY Sports)

The Illini have found an identity, and that’s to ruin whatever you’ve got going offensively by abruptly ending your possession.

“If the ball’s in the air, they go get it,” Iowa quarterback Nate Stanley said. “If somebody’s held up, they’re ripping at the ball.”

Study how the Illini have won four in a row, and it all starts with turnovers.

College football’s biggest upset of the season happened against Wisconsin because, with the Badgers up nine and marching in for an apparent nail-in-coffin touchdown drive, Jonathan Taylor fumbled and the Illini recovered. Another Wisconsin turnover and an Illinois touchdown and field goal later, and history was made. Illinois had won, 24-23, as 31-point underdogs.

A 3-0 game against Purdue quickly turned when Illinois’ Tony Adams grabbed an interception and ran it into the end zone. Illinois rolled, 24-6.

Then came lowly Rutgers, which was a 10-10 game at one point. But two defensive touchdowns and a plus-3 turnover margin sent Illinois to a 38-10 rout.

Finally, there was the Michigan State game. Down 31-10 entering the fourth quarter, Illinois rallied behind two turnovers — including a 76-yard interception-return TD by Sydney Brown with 4:53 remaining — for a 37-34 win.

So even though Illinois (6-4 overall, 4-3 Big Ten) has been outgained by more than 1,000 yards in conference play, it’s become bowl-eligible for the first time since 2014.

The full-season statistics are staggering.

“First guy there, he’ll wrap him up. Next three guys are pulling at the ball, trying to get the ball out,” Iowa tight end Nate Wieting observed. “They’re opportunistic. … These guys are competitive. They’re ballhawks.”

Illinois is coming here fearless, willing to ruin Iowa's senior day at Kinnick. It's won back-to-back Big Ten road games in a season for the first time since 2007.

"Good football teams have to go on the road and win, and I feel we are equipped to do that," Smith said. "We run the football on the offensive side, we put an emphasis on ball security and taking the ball away on defense."

The Illini are young in the secondary but strong in the middle. Linebacker Dele Harding is their biggest star. (He wears No. 9.) Harding leads the Big Ten in tackles at 12 per game and owns 10½ of Illinois’ 83 tackles for loss, a total that ranks seventh nationally.

Illinois is aggressive yet susceptible. It ranks No. 77 nationally in total defense.

In other words, Saturday’s 11 a.m., Big Ten Network-televised is all about an Iowa game of keep-away.

That’s typically one of the Hawkeyes’ best traits. It’s not something that needs to be stressed this week. Because, as Stanley said, “It’s a big part of our preparation, every single week.”

The only two times the Hawkeyes have lost the turnover battle in their last 19 games, they suffered painful one-score losses to Michigan (minus-3) and Penn State (minus-2). They’ve won the turnover battle in each of their last four games and are plus-37 as a program since the start of the 2015 season. They’re tied for ninth in FBS and first in the Big Ten with the fewest turnovers (nine) this season.

“That’s a part of practice, ball security,” Iowa receiver Ihmir Smith-Marsette said. “We take it very serious here. They (coaches) scream at us all the time to protect the ball.”

The likeliest way the Hawkeyes (7-3, 4-3) lose against Illinois is to fall into the turnover trap.

So, there’s extra pressure on true freshman running back Tyler Goodson, who lost a fumble against Penn State and had a pass bounce off his hands against Purdue that became an interception. There’s extra pressure on running back Mekhi Sargent, whose lone fumble this season came on Iowa’s first play of the game at Michigan. There’s more focus on Stanley, who hasn’t been intercepted in his last 81 attempts.